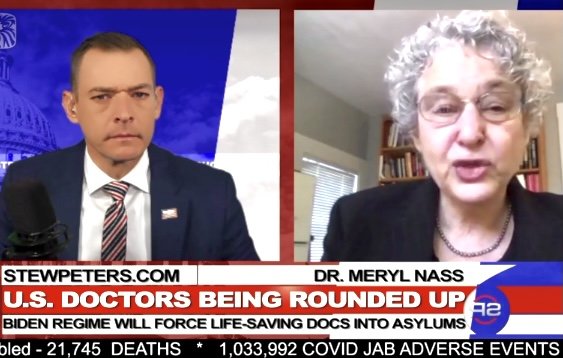 (LifeSiteNews) – In a move that many have called reminiscent of the “Stalinist-era Soviet Union,” the state of Maine’s Board of Licensure in Medicine (MBLM) suspended the medical license of a physician and ordered her to undergo psychological examination for the offense of “spreading COVID and COVID vaccination misinformation.”

Having been charged with treating her COVID-19 patients with off-label medications that have nonetheless been widely reported as effective against the novel virus, and for making certain claims the MBLM “deemed a danger to the public,” the board voted January 11 to suspend the license of Dr. Meryl Nass, M.D., ABIM, who has been practicing medicine in Ellsworth since 1997.

As a member of the scientific advisory board of Children’s Health Defense — Robert F. Kennedy, Jr.’s government watchdog organization — Dr. Nass is, according to her biography, “an internist with special interests in vaccine-induced illnesses.” Of note, due to the current environment, she is also widely recognized as an accomplished biological warfare epidemiologist who “developed a model for analyzing epidemics to assess whether they are natural or man-made.”

In a 19-minute video interview on the Stew Peters Show, the host also highlighted the esteem in which Dr. Nass has been held by government officials during her career, providing “testimony to six different congressional committees,” four different state legislatures, the U.S. Director of National Intelligence, and more.

“This is a tactic that they literally used in the Soviet Union,” explained Peters. “Soviet authorities said that people who criticized the system had ‘sluggish schizophrenia’ and they stuck them in mental asylums. And now, that Soviet system has come to America.”

Within the interview, Dr. Nass explained one primary motivation for her fighting this suspension is to protect other doctors who are being threatened around the United States as well. “Fifteen states have charged doctors with ‘misinformation’ and threaten their licenses,” she explained, often for prescribing life-saving drugs like ivermectin and hydroxychloroquine.

“The way medicine is being governed right now is via veiled threats and without any rules. There are no rules or regulations that say I can’t prescribe ivermectin or hydroxychloroquine,” she said.

Further, Nass explained that novel rules impeding the off-label prescribing of these medications— which have overwhelming evidence testifying to their even “miraculous” effectiveness —were “all imposed after the pandemic started.”

“There’s no good reason for [these rules]. They basically restrict patients and doctors from using the drug because it is a very good prophylactic,” she said. “It’s been used prophylactically for malaria, for many decades. There’s no reason not to use it as prevention of COVID for high-risk patients.”

Beginning last summer, Nass explained, non-profit organizations and then regulatory bodies started actively seeking to silence doctors who were publicly defending the effectiveness of these safe medications, and discouraging their patients and others from receiving dangerous gene-based experimental COVID injections.

“Bloated medical nonprofits like the AMA, the specialty boards … and an organization called the Federation of State Medical Boards all somehow started issuing threats beginning last summer to doctors,” she said.

They warned physicians against spreading “misinformation,” saying anything negative about COVID vaccines, for example, even though these organizations “don’t have any regulatory authority. They don’t get to make laws,” she said.

Last July, many of these organizations also bound together issuing a joint statement in favor of COVID vaccine mandates for all health care workers and beyond. Organizing this initiative was “the architect of Obamacare,” Ezekiel Emanuel, who has also suggested that when individuals reach age 75 their healthcare should be severely rationed, and he also strongly advocated for catastrophic shutdowns for ‘18 months’” in 2020.

After the issuing of threats to physicians, Nass explained these organizations then “brought [their complaints] to the medical boards” with those in 15 states agreeing to “go after doctors for ‘misinformation,’” while the rest “maybe read the [U.S.] Constitution and realized” these doctors have a First Amendment right to free speech.

“There are no allegations that I harmed any patients,” Nass explained. “In terms of treating people with hydroxychloroquine and ivermectin, these are legal drugs. They’re FDA approved. They’re fully licensed … I’m allowed to just write prescriptions for them off label.”

But “the CDC, the FDA and the state organizations, the Board of Pharmacy and the Board of Medicine basically issued threats to doctors and pharmacies not to prescribe or dispense these drugs — and without writing it down in words that you can take to court.”

“So basically, we’re being ruled by innuendo, by veiled threats. But there’s no law behind it. There are no regulations. Nobody’s issued anything. No legislators voted on it. Veiled threats. And this is not how we’re supposed to do business,” she explained.

Nass has been very outspoken in publicly defending the effectiveness of hydroxychloroquine and criticizing public health agencies like the Centers for Disease Control and Prevention (CDC).

Last February, she joined a chorus of other medical professionals by documenting how “Hydroxychloroquine has repeatedly been found to be an effective treatment for Covid19.”

Earlier in January, she raised flags against the CDC’s failure to transparently utilize its best data sources for reporting adverse events from the experimental Moderna COVID-19 gene-transfer vaccines, indicating they were likely deliberately misleading the public minimizing the true dangers of the injections.

After the MBLM issued a position statement last fall stating “Physicians who generate and spread COVID-19 vaccine misinformation or disinformation are risking disciplinary action by state medical boards,” Nass responded with a letter asking them to “define what it means by ‘misinformation’ and ‘disinformation,’ and to clarify what statutory authority the board has to discipline physicians on the basis of undefined transgressions.”

It is unclear if she ever received a response.

Asked by Peters about her legal strategy to fight her suspension, Nass shared that she is being assisted by Children’s Health Defense and that they had retained competent lawyers. With a smile, she said, “I think we will mount a strong defense.”

National reputation in anthrax: consulted for the World Bank affiliate Inter-American Development Bank (2001) and the Director of National Intelligence’s Summer Hard Problem Program (2008) among others; identified Zimbabwe’s 1978 anthrax epidemic as an episode of biological warfare (1992); after accurately diagnosing the cause, consulted for Cuba’s Ministry of Health on its optic and peripheral neuropathy epidemic (1993); created a methodology for determining the cause of suspect epidemics (1992); wrote about how to better manage the Ebola epidemic (2014); wrote a summary of the Zika epidemic for a US federal agency (2016)

Killing the cure: The strange war against hydroxychloroquine