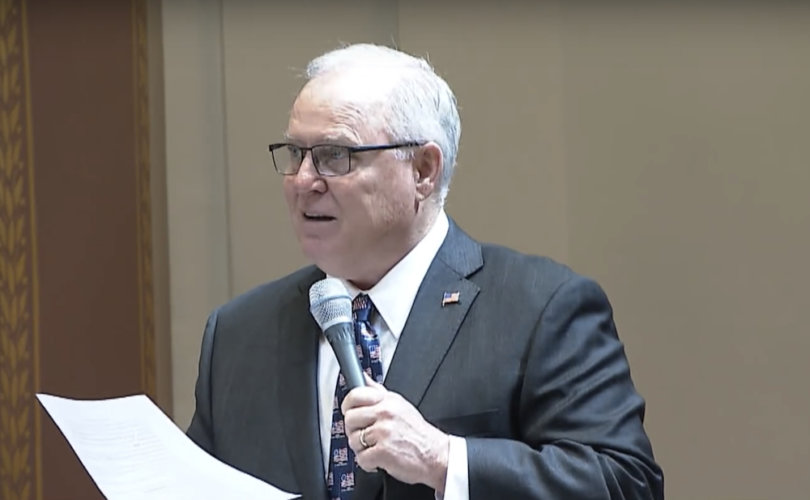 Minnesota Republican state Senator Dan Hall introduced a bill that would permit schools to display 'In God We Trust.'

SAINT PAUL, Minnesota, May 9, 2018 (LifeSiteNews) – The words “In God We Trust” triggered a battle last week in the Minnesota Senate, as legislators wrangled over an amendment to a bill that would allow schools to display the well-known national motto. Some Democrats condemned the proposal as “offensive.”

“I’ve seen a growing lack of respect,” said Republican Senator Dan Hall as he introduced the bill on the floor of the upper chamber. “It seems like ‘God and Country’ are no longer lifted in places of honor.”

“Too often, ‘God and country’ are seen as subjects of jokes or ridicule,’” Hall said. “The piece of history that our national motto represents has been removed over the years. Our national motto can bring us back to a freedom of faith, even in our schools.”

“This amendment allows our U.S. national motto, ‘In God We Trust,’ back on the walls of our schools, as a reminder of hope and tolerance,” explained Hall.

A backlash by Democrats followed immediately on the heels of Hall’s presentation.

“I’m afraid that this proposal would actually accomplish the opposite” of respect and tolerance, said Senate Democrat Scott Dibble. “I think it would send a fairly strong and unmistakable signal to young people of a variety of different religious perspectives and beliefs,” that “when they are greeted by a sign like this” their beliefs are neither tolerated nor respected.

“I oppose the posting of that motto in our schools. … I even would strongly make the case that we ought not to have that motto, something we can’t change, on our money,” said Senate Democrat John Marty. “The money in my wallet has to say ‘In God We Trust.’ I think that's offensive.”

Other Democrats stated their opposition as well.

The bill’s author, Sen. Hall, told Fox News that “There seems to be an ‘anti-faith movement’ in our country” that aims “to suppress anything that is religious.”

The omnibus education bill, SF 3086, has now been handed over to the Minnesota House of Representatives’ Education Finance Committee.

The entire floor debate, including Sen. Dibble’s long litany of alternatives, can be watched here.