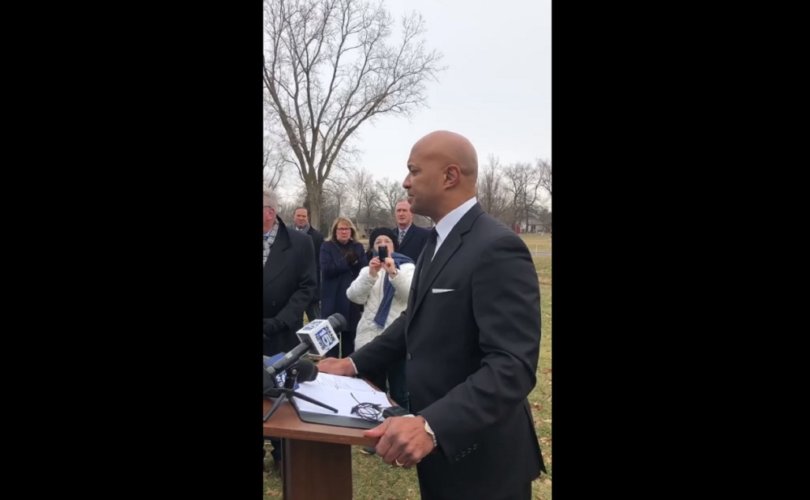 Attorney General Curtis Hill of Indiana speaks at the memorial service for over 2,400 of Ulrich Klopfer's unborn victims.TheDC Shorts / YouTube

Indiana attorney general Curtis Hill spoke at a funeral service at South Bend’s Southlawn Cemetery and Palmer Funeral Home for the 2,411 children whose bodies or body parts were preserved and stored by Kloper in his garage and the trunk of a car. The service began at 1:00 P.M.

Klopfer himself died on September 6, 2019 at the age of 79. His relatives discovered the majority of the human remains in 79 boxes while they were sorting through Klopfer’s belongings at his Crete, Illinois home. Later, more bodies were discovered in a car kept in Chicago.

According to the Daily Caller, Attorney General Hill said the infants could not be buried in the home states of their mothers because of their disintegrating condition.

He also said that by giving them a burial, “we fulfill our obligation as a state pursuant to law and conscience to the unborn babies whose lives were terminated in clinics in Fort Wayne, Gary, and South Bend.”

Hill called the discovery of the fetal remains “horrifying to anyone with normal sensibilities.” He also suggested that there is evidence that some of the unborn children were killed when they were in their third trimester.

Citizens for a Pro-Life Society (CPLS) wrote on its website that the victims could not be identified.

“Klopfer’s victims could not be identified due to the fact that sadly their bodies had decomposed so badly as they were aborted 18 years ago, and the medical records that were also discovered were so poorly kept,” the organization wrote.

It is not known why the abortionist kept the bodies of his victims. According to the Daily Caller, Klopfer ran three different abortuaries in Indiana and performed over 30,000 abortions since he began his career in 1974. His medical license was suspended in 2016.

As pro-life group Operation Rescue has extensively documented, Klopfer had a history of abuses, including failing to report the statutory rapes of two girls. He sent an eleven-year-old victim home with her parents, who knew their daughter had been raped by her uncle but didn’t want him prosecuted, without reporting the crime to police.

After the bodies were found, the president and CEO of Indiana Right to Life stated that his own organization was “horrified.”

“We are horrified by the reports of over 2,000 fetal remains being found on the property of Dr. Ulrich Klopfer, a man who operated abortion facilities in Gary, South Bend, and Fort Wayne,” said Mike Fichter.

“These sickening reports underscore why the abortion industry must be held to the highest scrutiny. We are calling on Indiana authorities to join in the investigation to determine if these fetal remains have any connection to abortion operations, or personnel, in Indiana.”

“Indeed, 31 years ago Citizens for a Pro-Life Society, with the Pro-Life Action League, found hundreds of aborted babies killed by Klopfer left out for garbage pick-up on the loading dock of the Vital Med laboratory in Northbrook[, Illinois],” Miller said.

“These were babies he killed at the Indiana abortion center where he worked at that time — [the] Fort Wayne Women’s Health Organization, owned then by Susan Hill, who decades ago ran a string of abortion clinics. Many of the bags containing the babies even had his name scribbled on them.”

“Citizens for a Pro-Life Society buried some of the Klopfer babies in Tallahassee[, Florida], but many of them were buried in Fort Wayne — as we delivered them to the pro-lifers there for the purposes of their interment.”

Miller wrote in her memoir Abandoned: The Untold Story of the Abortion Wars about finding, rescuing, photographing, and burying the bodies of aborted babies she and other activists found left out with the trash during the early days of legal abortion.