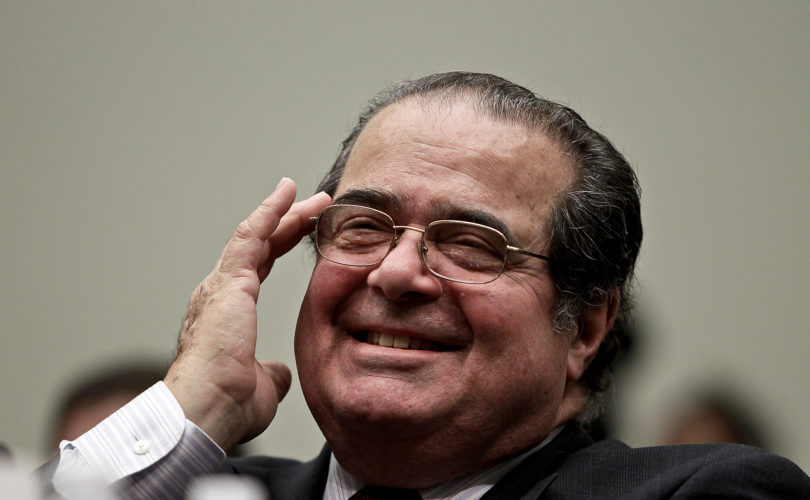 WASHINGTON, D.C., April 29, 2015, (LifeSiteNews.com) – If the Supreme Court rules that same-sex “marriage” is a constitutional right, one justice has said that the government could force clergy of all denominations to perform gay “weddings” or lose the ability to officiate any state-sanctioned marriage.

On Tuesday, the U.S. Supreme Court heard oral arguments in Obergefell v. Hodges, the case that will decide whether the Constitution forbids states from upholding marriage as the union of one man and one woman. Among the exchanges, Justice Antonin Scalia repeatedly noted that if the High Court finds same-sex “marriage” is a constitutional right, then priests, ministers, rabbis, and imams will be required to perform such ceremonies – regardless of their religious beliefs – or face state penalties.

Justice Scalia repeatedly suggested that once a constitutional right to marry by same-sex couples was enshrined by the court, a member of the clergy could not be given civil marriage powers by the state unless he agreed to perform any and all marriages that the nation legally recognizes.

“Every state allows ministers to marry people, and their marriages are effective under state law,” Scalia said. “That will not be the case if, indeed, we hold, as a constitutional matter, that the state must marry two men.”

As it stands, most clergy serve a dual role, celebrating church nuptials but also signing legal documents allowing the state to legally recognize that marriage. But if they refuse to conduct same-sex rituals, government officials may strip clergy of their state legal standing, rendering their marriages legally invalid in the eyes of the state government.

He said he was reticent to give the power to compel someone to violate his conscience to the State. “I'm concerned about the wisdom of this court imposing through the Constitution a requirement of action which is unpalatable to many of our citizens for religious reasons,” Scalia said. He noted that most religious denominations “are not likely to change their view about what marriage consists of.”

Justice Scalia noted the key difference between state laws, which can make exceptions for religious beliefs, and finding a right to gay “marriage” in the Constitution, which would allow no exceptions. “Were the states to [redefine marriage] by law, they could make exceptions to what is required for same-sex marriage, who has to honor it, and so forth. But once it's made a matter of constitutional law…is it conceivable that a minister who is authorized by the state to conduct marriage can decline to marry two men? Is it conceivable that that would be allowed?”

His question was rebuffed by some of the court's liberal justices, who pointed to the “free exercise of religion” clause in the Bill of Rights – but it was not answered.

Unsatisfied, Justice Scalia continued to explain that same-sex “marriage” bans in the states “are laws. They are not constitutional requirements. If you let the states [redefine marriage], you can make a [religious] exception. The state can say, 'Yes, two men can marry — but ministers who do not believe in same-sex marriage will still be authorized to conduct marriages on behalf of the state.' You can’t do that once it is a constitutional proscription.”

A devout Roman Catholic, Scalia said that no religious exception can be allowed for a constitutional right. A minister “is not given the state’s power, unless he agrees to use that power in accordance with the Constitution. You can’t appoint people who will then go ahead and violate the Constitution.”

“I don't see how you could possibly allow that minister to say, 'I will only marry a man and a woman. I will not marry two men,'” Scalia said.

He also drew a subtle but clear attention to the fact that the ultimate impact would be to favor liberal denominations, like the Episcopal Church, over traditional ones like the Roman Catholic Church. “You could have ministers who conduct real marriages that are civilly enforceable at the National Cathedral, but not at St. Matthew's downtown, because that minister refuses to marry two men, and therefore, cannot be given the state power to make a real state marriage.”

Many Christian leaders are concerned that if the Supreme Court finds same-sex “marriage” a constitutional right, they will be forced to disobey federal law – and, like the civil rights protesters of the 1960s, accept the legal consequences that follow.

Such a scenario is not new. In 2014, two Christian ministers who own an Idaho wedding chapel were told they had to either perform same-sex “weddings” or face a 180-day jail sentence and a $1,000 a day fine. The ministers sued and won, this time.

“The other side insisted this would never happen – that pastors would not have to perform same-sex marriages,” Alliance Defending Freedom attorney Jeremy Tedesco said. “The reality is it’s already happening.”

Biology vs. feelings? The US Supreme Court asks what defines marriage in oral arguments

US Supreme Court to rule on marriage in June, but can’t settle the issue