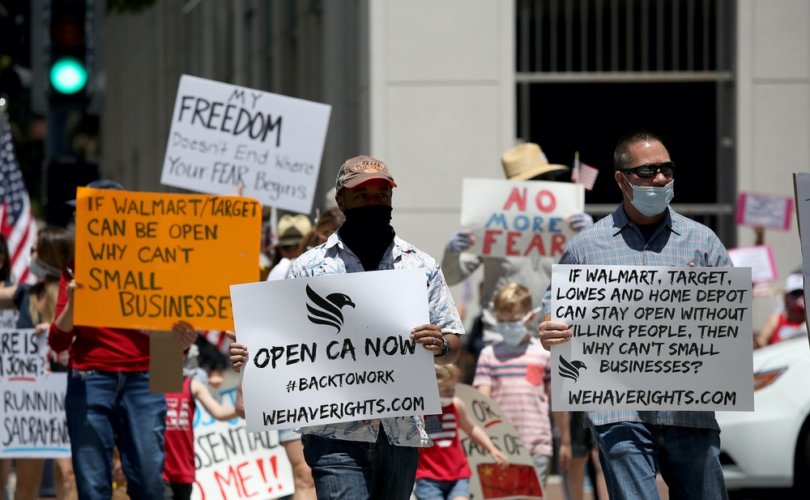 May 6, 2020 (LifeSiteNews) – Across the country, citizens are taking to the streets to urge governments to “reopen” the individual states following severe restrictions on public life due to the coronavirus pandemic. Additionally, lawsuits are being filed in many places.

Most prominently, the people of Michigan have congregated in the state’s capital of Lansing on two separate occasions since mid-April.

On April 30, hundreds of protesters, “some carrying firearms, took their demonstration against Gov. Gretchen Whitmer’s stay-home order inside the Michigan Capitol … in a confrontational showdown with authorities,” reported The Detroit News.

“Outside the Capitol, 800 to 1,000 protesters participated in the American Patriot Rally throughout the day, according to Michigan State Police Lt. Darren Green,” the article continued.

Prior to that event, on April 15, thousands of vehicles had come to Lansing. “Police watched as horns honked and commercial and private vehicles from around the state jammed Capitol Avenue and other streets surrounding Michigan’s seat of government in Lansing,” USA Today wrote.

“‘Liberty once lost is lost forever,’ read a sign draped across a commercial van. ‘Security without liberty is called prison,’ read another, stretched across the Capitol’s front lawn. ‘Recall Whitmer,’ a third sign said.”

Even President Donald Trump seemed to support the protest, tweeting “LIBERATE MICHIGAN!” shortly after the protest known as “Operation Gridlock” took place. He sent out similar tweets about Minnesota and Virginia.

Democratic Michigan Gov. Gretchen Whitmer’s response to the coronavirus pandemic is among the most severe in the country. Citizens are now required to wear masks in public places like grocery stores. On April 10, Whitmer banned grocery stores from selling items like fruit and vegetable seeds and paint.

“We’ve now witnessed local and state governments issue decrees about what people can and cannot buy in stores, arrest parents playing with their children in public parks, yank people off public buses at random, remove basketball rims along with private property, ticket churchgoers, and in one case try—and fail—to chase down a lone runner on an empty beach. All of this, we’re told, is for our own good,” wrote John Daniel Davidson at The Federalist.

Davidson called Whitmer’s order “an object lesson in the absurdity and inconsistency of arbitrary power and rule by fiat.”

“Michiganders are banned from traveling ‘between residences’ if they own a cottage or a summer home,” he noted, “but the ban only applies to Michigan residents, so an out-of-stater with a cottage in the Upper Peninsula could presumably still visit. The ban also still allows travel between states, so if a Michigander has a cottage in Wisconsin or Ohio, he can travel without fear of being arrested or fined by state police.”

Two ReOpen NC protests took place in April in North Carolina’s capital of Raleigh. While at the first event, one arrest was made, the second protest went smoothly.

“The second ReopenNC protest in Raleigh on Tuesday, April 21, while boisterous, felt much calmer than the first,” reported the Carolina Journal. “Motorcycle officers from the Raleigh Police Department escorted several hundred demonstrators without incident as they marched around the Executive Mansion, the Legislative Building, and the Old Capitol Building.”

On May 5, Democratic North Carolina Governor Roy Cooper signed an executive order easing some restrictions imposed on his state. However, places like restaurants and hair salons remain closed.

“The crowd included anti-vaccine activists and was no larger than a typical weekday rally over issues such as guns or teacher pay, when the Legislature is in session,” The Independent wrote dismissively of a Texas rally.

“Many of the protesters are seeking an immediate lifting of restrictions that have been successful in stopping the spread of the coronavirus. Some protesters chanted ‘Let us work.’”

In Dallas, Texas, a hair salon owner was sentenced to seven days in jail, as well as a $7,000 fine, for opening her business and defying Republican Texas Governor Greg Abbott’s stay-at-home order.

“I have much respect for this court and laws,” said Shelley Luther during her court hearing. “I have never been in this position before and it’s not someplace that I want to be.”

“But I have to disagree with you sir, when you say that I’m selfish because feeding my kids – is not selfish,” she continued. “I have hair stylists that are going hungry because they’d rather feed their kids. So sir, if you think the law is more important than kids getting fed, then please go ahead with your decision but I am not going to shut the salon.”

“One of several rallies over the weekend, demonstrators packed all four corners of Foothill and Day Creek boulevards, ignoring social distancing rules, and carrying signs with slogans such as ‘Liberty & freedom before safety & security,’ ‘Stop the tyranny,’ ‘Recall Newsom,’ and ‘Freedom over fear,’” according to the Inland Valley Daily Bulletin.

At a May 1 protest in Sacramento, California’s capital, a confrontation with public authorities “ultimately led to 32 arrests by the end of the rally.”

“Decked out in American flag paraphernalia and Trump 2020 campaign gear, attendees chanted, ‘USA! USA!’ and ‘Whose house? Our house!’ Some waved signs and cameras in officers’ faces, urging them to defy Newsom’s order,” wrote the San Francisco Chronicle.

Pro-life activist and filmmaker Jason Jones, who created Bella, Crescendo, and Little Boy, to name a few, was arrested protesting Hawaii’s lockdown. A video of his arrest can be viewed below.

Wikipedia has dedicated a website to “2020 United States anti-lockdown protests,” which is updated regularly and provides a quick overview.

Many lawsuits have been filed throughout the last weeks. A lot of those have to do with religious liberty, for instance worship services being prohibited, or restricted in ways other businesses are not.

The federal Department of Justice supported the community’s case, stating, “Because the executive orders prohibit Lighthouse’s sixteen-person, socially distanced gathering in a 225-seat church but allow similar secular conduct, such as a gathering of 16 lawyers in a large law firm conference room, the governor’s executive orders may constitute a violation of the church’s constitutional rights to the free exercise of religion.”

In North Carolina, a group of pro-life activists sued the local government of Greensboro for violating the group’s First Amendment rights to walk and pray on the sidewalk outside an abortion center.

Filed by the Thomas More Society, the lawsuit describes the plaintiffs as “individuals who pray, engage in expressive activity, and otherwise exercise their First Amendment rights on the public sidewalks and rights of way outside the abortion clinic in Greensboro and elsewhere.”

Tesla CEO Elon Musk might be the most prominent businessman who has come out strongly in support of removing current restrictions.

“Now give people back their FREEDOM,” Musk tweeted on May 1.

“Yes, reopen with care & appropriate protection, but don’t put everyone under de facto house arrest,” he explained, while praising Texas for opening up.

Musk also called classifying “all deaths as corona even if corona didn’t cause the death is simply a lie,” adding, “This is misleading to the public.”