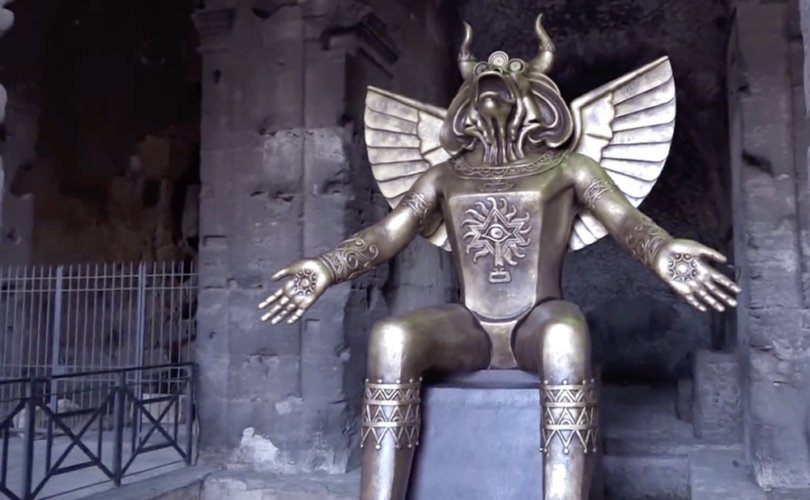 The pagan god Moloch greets visitors to the Colosseum, Rome, as part of an exhibition that opened Sept. 27, 2019.sanmarinortv.sm / screen grab

ROME, November 6, 2019 (LifeSiteNews) – A reconstruction of a pagan idol who demanded child sacrifice was stationed at the entrance of Rome’s Colosseum as part of a secular historical exhibition.

The presence of the idol raised particular concern among Catholics, as it was erected nine days before the Amazon Synod and the subsequent scandal over the veneration of the Pachamama idol at the Vatican.

The statue of Moloch, worshipped by both the Canaanites and the Phoenicians, is part of an exhibit dedicated to Ancient Rome’s once-great rival, the city of Carthage. The large-scale exhibition, titled Carthago: The immortal myth, runs until March 29, 2020.

“A reconstruction of the terrible deity Moloch, linked to Phoenician and Carthaginian religions and featured in the 1914 film Cabiria (directed by Giovanni Pastore and written by Gabriele D’Annunzio) will be stationed at the entrance to the Colosseum to welcome visitors to the exhibition,” stated a press release about the exhibit.

The statue of Moloch was erected nine days prior to the opening of the Amazon Synod, which was plagued with controversy from the beginning after a ceremony in the Vatican Gardens involving the pagan goddess “Pachamama” was held in the presence of Pope Francis and top-ranking prelates.

In the ceremony, participants prostrated themselves before wooden statuettes of the fertility goddess indigenous to South America. The statuettes were kept as part of an exhibit in the Church of Santa Maria in Traspontina until they were thrown into the Tiber by Austrian Catholic Alexander Tschugguel on Oct. 21. Afterward, one copy of the mass-produced figures was kept in the church.

Some Catholics are distressed that the pagan god Moloch has been erected at the entrance to the Colosseum, which is one of many amphitheatres where Christians were tortured and executed for the entertainment of the pagan crowds.

“We were so excited the day we decided to go to the Colosseum,” Alexandra Clark told LifeSiteNews via email. She and her sister Tiffany were looking forward to visiting the site of Christian martyrdom.

“But the moment we got there the sight that greeted us was horrifying! Standing guard over the entrance was the colossal pagan statue of Moloch. It was placed in that prime spot so that everyone that entered into the Colosseum had to pass it,” she continued.

“It was like they put Moloch there to mock the sacred place where the holy martyrs spilled their blood for the True Faith!”

Clark saw a connection between the idol of Moloch and the Pachamama images that featured so prominently at the recently concluded Amazonian Synod.

“Both of these evil pagan idols required child sacrifices and both of them came to Rome at about the same time [as] the Synod,” she said.

The two sisters remained near the Moloch statue to gauge other reactions. Clark noted that a few others, including religious sisters, were clearly shocked by the giant figure.

The image of Moloch is modeled on a representation of the child-devouring demon found in the 1914 Italian silent film Cabiria. In the film the idol of Moloch, set up in a Punic temple, has a giant bronze furnace in his chest, into which hundreds of children are thrown. Cabiria, the heroine of the film, is threatened with this fiery fate.

The film’s depiction of the idol has a historical basis. Three ancient Greek historians all attest that it was customary in Carthage to burn children alive as offerings to the deity, whom they called Baal and Cronus or Saturn, the Roman god who, according to myth, ate his own children lest they supplant him. Moloch is also mentioned several times in the Book of Leviticus. Hebrew parents are forbidden to sacrifice their children to the god.

Meanwhile, that Christians were killed in arenas like the Colosseum is indisputable. Before his martyrdom, St. Ignatius of Antioch wrote a letter circa 110 AD describing his probable fate.

“I write to the Churches, and impress on them all, that I shall willingly die for God, unless you hinder me. I beseech of you not to show an unseasonable good-will towards me. Allow me to become food for the wild beasts, through whose instrumentality it will be granted me to attain to God. I am the wheat of God, and let me be ground by the teeth of the wild beasts, that I may be found the pure bread of Christ.”

According to historian Eusebius of Caesaria, St. Ignatius was indeed killed by wild animals in an arena in Rome.

Carthage was destroyed by the Roman Republic in 146 BC during the Third Punic War after repeated demands from Cato the Censor to the Roman Senate. Cato is said to have ended all his speeches with the declaration that “Carthago delenda est,” that is, Carthage must be destroyed. However, Carthage was born again as a Roman colony, Roman Carthage, which became an important city in Roman Africa. St. Augustine of Hippo taught at a school of rhetoric there in the fourth century.