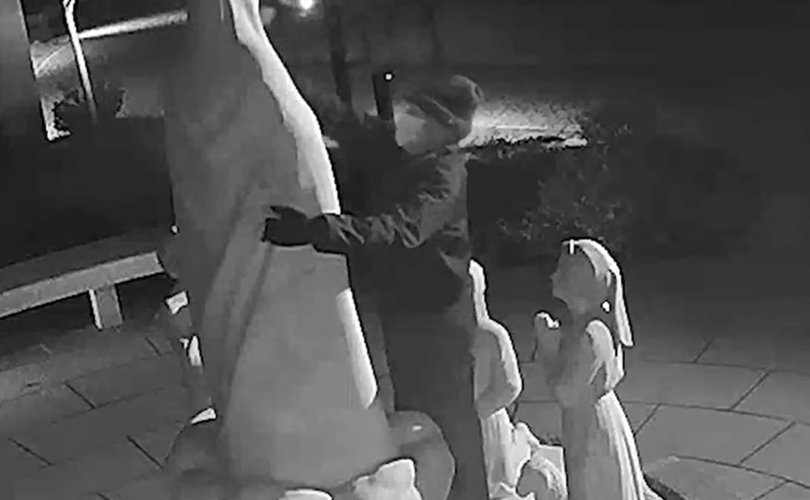 WASHINGTON (LifeSiteNews) — A statue of Our Lady of Fatima outside the National Shrine of the Immaculate Conception in Washington, D.C., was vandalized with a hammer by an unidentified man Sunday.

Surveillance video shows a masked man hit the statue of Our Lady once with the hammer before stepping away to look at the statue from a distance, and then approach again to hack away at her face, before leaving.

The statue’s folded hands and nose have been knocked off, and the right cheek and eye area are damaged, as well. The Basilica’s press office said the man ran off with the statue’s hands.

The culprit remains unidentified, and D.C. police are investigating the vandalism.

“We have contacted authorities and, though we are deeply pained by this incident, we pray for the perpetrator through the intercession of the Blessed Virgin Mary under her title of Our Lady of Fatima,” the Director of Communications Basilica of the National Shrine of the Immaculate Conception said in a statement.

Since May 2020, over 100 incidents of vandalism and destruction, including arson, at Catholic sites across the United States have been tracked by the U.S. Conference of Catholic Bishops’ (USCCB) Committee for Religious Liberty. This most recent damage to the statue of Our Lady of Fatima brings the number of incidents to at least 113.

The white Carrara marble statue of Our Lady of Fatima and its surrounding garden were completed in 2017, the 100th anniversary year of the Blessed Mother’s appearances to three shepherd children at Fatima, Portugal. Her message there emphasized the importance of prayer, especially the rosary, and sacrifice for the conversion of sinners.

She also called for the consecration of Russia to the Immaculate Heart of Mary by the Pope, warning that if he did not do so, Russia would “spread her errors throughout the world, causing wars and persecutions of the Church.” She added, “The good will be martyred, the Holy Father will have much to suffer, various nations will be annihilated.”

Mary’s last words to the children on October were, “Do not offend the Lord our God any more, because He is already so much offended.”

D.C. police are asking anyone who may know the man seen in the video or anyone with additional information regarding this incident to call them at 202-727-9099 or text 50411.