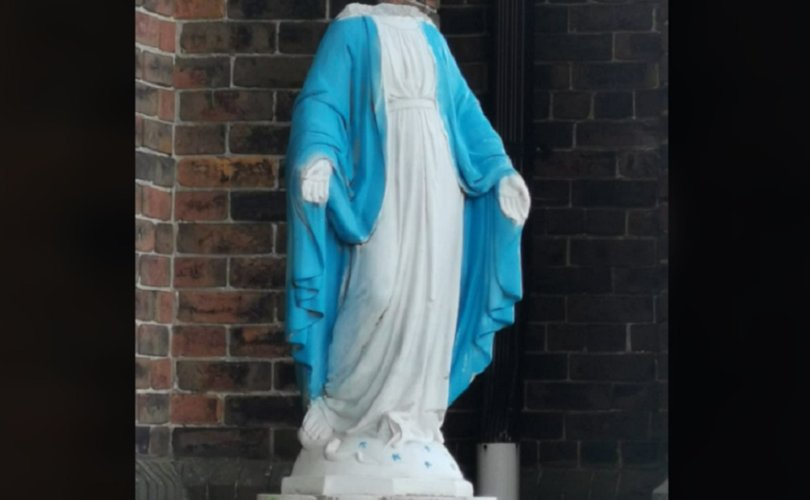 TORONTO, September 2, 2020 (LifeSiteNews) — A statue of the Blessed Virgin Mary that stands outside Our Lady of Lebanon in Toronto was decapitated early Sunday morning in what the parish described as a “deplorable and malicious act.”

The head of the profaned statue could not be found, the church related in a Facebook post.

“Sunday August 30th, 2020, before we started our Masses at Our Lady of Lebanon church Toronto, we were shocked to discover a horrible act of vandalism: We found that the statue of the Virgin Mary, erected in front of the church, was completely decapitated!” the statement said.

“We couldn’t find the head anywhere near the statue…Our parishioners, when exiting the church, were horrified to see such a deplorable and malicious act.”

Toronto police say the statue was vandalized about 3:15 Sunday morning. They released security camera images of the suspect and are asking witnesses to come forward to help with the investigation.

“The suspect is described as 5’11”- 6’1”, thin build, long dark swept back hair, and clean shaven. He was wearing a black t-shirt with a large white design on the front, a thin red vest over the t-shirt, beige shorts and dark Birkenstock-style sandals,” the police description reads.

The police are classifying the crime as mischief, not a hate crime, Rebel News tweeted.

CAUGHT ON CAMERA: Police classify decapitation of Virgin Mary statue in #Toronto as mischief, not a hate crime.

Neil MacCarthy, spokesman for Cardinal Thomas Collins of Toronto, also took to Twitter to deplore the desecration as a “despicable act of cowardice”:

Sadly this is happening more frequently to churches in our community. Despicable acts of cowardice. https://t.co/iiXacP8ez9

The Catholic Civil Rights League likewise “decries the violence done against the statue of Our Lady at Our Lady of Lebanon, a wonderful church and a wonderful community in Toronto’s west end,” said the League’s executive director Christian Elia.

“We do alert people that vandalism against our churches in Canada, North America and in Europe are on the rise, from dramatic cases overseas to more benign but nevertheless disturbing ones here,” he told LifeSiteNews.

It’s worth noting that “this decapitation of a statue of Our Lady seems to have struck a nerve,” added Elia.

“We are pleased with the response that civic authorities have made in denouncing this, when other times in the past they have remained silent,” he said.

Indeed, Mayor John Tory tweeted Sunday that he was “horrified” to see that a vandal had decapitated the statue, the Toronto Star reported.

Tory said he contacted the church and that the city “deplores any violence or vandalism against places of worship.”

Newly elected Conservative leader Erin O’Toole, who is pro-abortion in spite of his Catholic faith, also lamented the incident on Twitter, as well as denouncing the destruction of a statue of Canada’s first prime minister, Sir John A. MacDonald, in Montreal over the weekend.

In May, vandals used power saws and grinders to behead eight bronze statues in broad daylight at the historic Stations of the Cross at the Grotto of Our Lady of Lourdes in Sudbury, Ontario. There are no reports as yet of any suspects being arrested in that case.

Moreover, during a recent spate of vandalism in the United States, notably in June, vandals pulled down and desecrated statues of Catholic missionary St. Junípero Serra in San Francisco and Los Angeles.

The St. Junípero statue in Ventura, California was targeted by a left-wing mob to suffer the same fate, but a group of young Catholics courageously placed their bodies between the statue and those who wanted to tear it down.

The statue was subsequently removed in the middle of the night and placed in a storage facility because city and local Catholic authorities agreed that it was in danger.

San Francisco’s Archbishop Salvatore Cordileone led prayers of reparation and exorcism at the base of the statue of St. Junípero Serra after it was profaned.

The statue had been “blasphemously torn down,” and an “act of sacrilege” had occurred where they prayed, he said. “This [sacrilege] is the activity of the Evil One, who wants to bring down the Church, who wants to bring down all Christian believers. So we have gathered together to pray to God in an act of reparation, asking God’s mercy upon us, upon our whole city, that we might turn our hearts back to Him.”