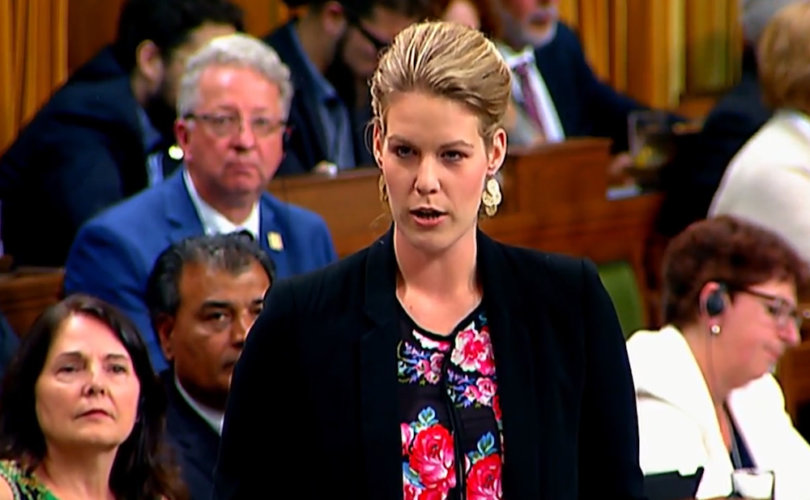 OTTAWA, October 3, 2017 (LifeSiteNews) — The Liberal-dominated parliamentary committee on the status of women voted down Conservative MP Rachael Harder as chair because of her pro-life record.

Harder’s defeat was expected after the Liberals staged a dramatic walkout last Tuesday to protest her nomination by Conservative leader Andrew Scheer.

Harder has a perfect pro-life voting record, and Liberal and NDP MPs on the committee claimed her pro-life views disqualified her from being a spokesperson for a body tasked with commenting on policies and legislation on women’s rights.

The chair for status of women committee — who is also committee spokesperson — is traditionally nominated by the opposition leader.

Although the Conservatives stood by Scheer’s choice of Harder, the committee voted Tory MP Karen Vecchio as chair against her wishes, reported CTV.

Vecchio, who told the committee in March she was “pro-choice,” could not get the committee to withdraw the motion nominating her and was essentially forced to accept the position, CTV reported.

Malcolmson had earlier protested Harder’s appointment as shadow minister for status of women, and joined the Liberal protest walkout last Tuesday that grabbed media attention and left the committee without a chair and unable to function.

“I feel more comfortable with her being the committee spokesperson and the arbiter of the committee’s business, given that she doesn’t have as outrageous a position on reproductive rights and abortion access,” Malcolmson told CTV after today’s vote.

“I think that Canadian women have been very vocal against the narrow-mindedness of the Liberal and NDP members on the Status of Women committee. The Liberals have frankly overplayed their hand,” says Johanne Brownrigg, Campaign Life’s Ottawa lobbyist.

“Losing Rachel Harder as committee chair is a loss for that committee but also for Canadian women,” Brownrigg told LifeSiteNews in an email. “Once again we see the evidence that diversity is not actually a Trudeau Liberal value.”

Harder and Vecchio released a statement after the vote also decrying the “intolerance” of Prime Minister Justin Trudeau and the Liberals, CTV reported.

“For Trudeau, to say a Member of Parliament is unfit to hold a procedural position because she doesn’t agree with his personal position, is ridiculous,” they said.

Last week’s Liberal walkout sparked a similar war of words between Scheer and Trudeau, with the latter endorsing the protest and the former suggesting the prime minister had a hand in planning the theatrics.

Having a chair who “would be able to stand up and unequivocally defend women’s rights” was “sort of the point of the status of women committee,” Trudeau told the reporters at that point.

Scheer for his point denounced the Liberals for rejecting Harder for “one particular personal point of view,” telling CTV News the Conservatives have no intention of reopening the abortion debate.

“The Liberals are trying to politicize this,” Scheer said. “I actually find it disgusting that the Liberals would treat a young, female Member of Parliament in this way, and it just shows the intolerance of the Liberal party.”

“On behalf of women across this country, I find it insulting that the Liberals are dictating to Canadians what ALL women believe and it is absolutely hypocritical for the Party that claims to stand for ‘choice’ to dictate to Canadians what a right choice is,” she wrote September 27.

“This is intolerance at its finest and the actions of the PM behind the scenes are dictatorial in nature.”

Harder has a stellar pro-life voting record, but Campaign Life rates her with an “amber light,” denoting “caution,” because she has yet to clarify statements on access to abortion attributed to her during the last election campaign.