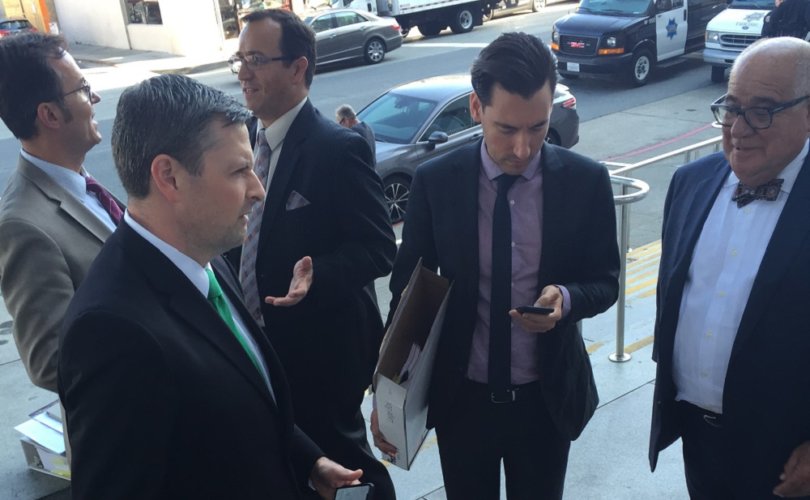 Sept. 24, 2019 update: After LifeSiteNews published this story, David Daleiden testified on September 13 that he found a 2012 Stanford study published in Circulation which states: “In brief, human fetal hearts (StemExpress, Diamond Springs, CA) were perfused using a Langendorff apparatus…”  Stem cell expert Dr. Theresa Deisher testified September 18, the last day of the hearing, that in order to be used in research and on a Langendorff apparatus, a human fetal heart “has to be beating” when harvested from the baby. The heart must then “be arrested in a relaxed position” by perfusing it with a potassium solution to be transported to the research site, where it is started again electrically, she said.

She also admitted at the preliminary hearing of David Daleiden and Sandra Merritt of the Center for Medical Progress that the baby’s head could be procured attached to the baby’s body or “could be torn away.”

“That is an especially gruesome admission, but it begs the question: how did they get these fully intact human children?” says Peter Breen of the Thomas More Society, which is representing Daleiden at the hearing.

“If you have a fetus with an intact head and an intact body, and intact extremities, that is something that would indicate that child was born alive, and then had their organs cut out of them, or that that child was the victim of an illegal partial-birth abortion,” he told LifeSiteNews.

“Both of these are gruesome and violent acts.”

CMP’s Daleiden and Merritt are charged with 15 felony counts of illegal taping of confidential information in connection with undercover videos they released in 2015 after a three-year covert investigation into the buying and selling of baby body parts, which is a felony.

The covertly recorded videos exposed StemExpress as the go-to in California for Planned Parenthood’s trafficking in baby body parts, and the biotech company cut its ties with Planned Parenthood shortly after these were released.

CMP’s legal team is arguing in the preliminary hearing that the law does not consider conversations that can be overheard confidential and that covert recording is allowed when done to investigate violent crimes.

On Thursday, the court saw video clips of the StemExpress CEO, identified as Doe 12, meeting in May 2015 with Daleiden and Merritt, who were posing as owners of a biotech company.

Doe 12 says in the video there’s a great demand for “raw fetal tissue,” and that the “insanely fragile” neural or brain tissue is best shipped in a “whole calvarium,” or head, whereupon Daleiden says, “Just make sure the eyes are closed.”

“Yeah,” laughs Doe 12, “Tell the lab techs its coming…it’s almost like they don’t want to know what it is.”

Doe 12 was far less forthcoming in her testimony Thursday, as Breen noted.

“One thing we’ve observed throughout these proceedings is that these witnesses were much more candid when they spoke to David and Susan on the undercover video than they are on the stand,” he told LifeSiteNews.

“However, we have been able to establish certain facts that are important through their testimony, and when they deviate from the video, we’ve been able to use the video to show that they’re not telling the truth on the stand,” Breen said.

“That’s important to show that the attorney general is using witnesses who are willing to stretch the truth, and our side is exposing that truth.”

Breen told the court that StemExpress was mentioned in connection with Stanford University studies where Langendorff perfusion was used, a technique that “requires a beating heart.”

“Does StemExpress supply fetal hearts to Stanford?” he asked Doe 12.

She also admitted that CMP photos are accurate and that sometimes a baby’s intact calvarium is attached to the baby’s body and sometimes it is not.

In another key exchange, Doe 12 testified that her company requests that parties sign a nondisclosure agreement or NDA before discussing business.

But while Doe 12 met with Daleiden and Merritt in late May, the NDA for the meeting was signed in late June, according to an email from StemExpress to CMP that Breen produced in court.

Nor was Doe 12 able to produce evidence the NDA had been sent to Daleiden and Merritt before the meeting.

“After talking about how important a NDA is, the only evidence in the record is that  the NDA was not sent out until a month after this supposedly highly confidential meeting,” Breen told LifeSiteNews.

“So that was a really significant point. That’s why there was so much argument on it,” he said.

“At the same time, the statute is clear: if there is a reasonable expectation that the conversation can be overhead, then it doesn’t count as a confidential conversation,” he said.

“So our contention is, if you’re sitting there at a restaurant with wait staff around you and coming and going as they please, you can be overheard,  that’s a clear exception to the statute.”

Former StemExpress technician Holly O’Donnell supplied the PP consent form to CMP. She also is featured in two CMP videos describing in graphic detail the process of sorting through dismembered arms and legs of aborted babies.

The form states there will be no changes to the abortion procedure because of the decision to donate blood or fetal tissue.

When Doe 12 said she couldn’t recall what the form said, Breen played for the court “a portion of the video tape where she bragged about memorizing the [PP consent] form down to the control numbers,” he told LifeSiteNews.

“She wouldn’t admit that patients are not told their abortion procedures could be changed, but we know it to be true,” Breen told LifeSiteNews.

“So we’re using the videos to be able to show these people are not being straight with the court,” he said.

“And so you shouldn’t believe them with anything they’re saying.”

The hearing resumes Tuesday, and Doe 12 returns next week to complete her testimony.