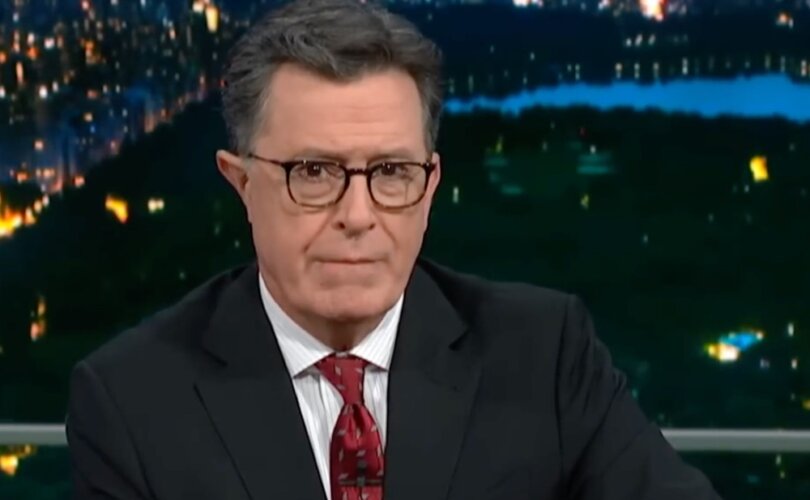 (LifeSiteNews) — Liberal late night talk show host Stephen Colbert was caught spreading falsehoods about a father of five who is strongly opposed to providing children with sexually explicit reading material, but his apology was half-hearted at best.

Colbert, a self-professed Catholic, ended up with egg on his face after taking a swipe at Michigan GOP gubernatorial candidate Tudor Dixon following her debate with pro-abortion leftist governor Gretchen Whitmer on October 26.

Dixon stated that a voter informed her he switched parties after finding “pornographic” books in libraries in Dearborn, Michigan, an area with a large Muslim population. The man realized that Democrats “won’t stand up for our children,” she said, and is now voting Republican.

Colbert mocked Dixon’s anecdote in a monologue on his CBS show, stating, “Dixon’s not the only one worried about this issue. So is this guy she totally made up.”

But Colbert was fact-checked by The Detroit Free Press, which reported that Khalil Othman, a 41-year-old former Democratic candidate for the State house and the Dearborn City Council, did, in fact, tell Dixon he was supporting her.

“To claim that I’m not here, I don’t exist, I’m not human, that’s absolute ignorance,” Othman told the outlet.

Instead of issuing a sincere apology for his inaccurate remarks, Colbert made light of the situation by delivering a tongue-in-cheek political statement.

“During a debate, she [Dixon] told a story that frankly I doubted,” Colbert said. “It is a terrible thing for someone to deny your very existence. Just ask trans[gender] people.”

He then pretended to look for Othman online, who said his identity should have been traceable on the internet, “finding” pornography instead.

Colbert proceeded to shame Othman, who was born in Yemen, for supporting “an election-denying, transphobic, COVID-19 conspiracy theorist.”

“What a wonderful example for all of our children,” he mocked.

— Article continues below Petition —
Stand with Christian daycare worker fired for refusing to indoctrinate kids with LGBT agenda
Show Petition Text
7957 have signed the petition.
Let's get to 9000!
Thank you for signing this petition!
Add your signature:
Show Petition Text

In Facebook posts, Othman explained that’s he’s supported Democrats for decades, but that after attending a Dixon rally in Flat Rock, Michigan, and after learning she supports parental rights, he, his family, and his friends will now be voting Republican.

“Let us go out and vote tomorrow and protect our children from this radical ideology. Vote for the people who are standing with parents and kids. Vote Dixon,” he said.

Like many elections across America, the race for Michigan’s governorship has tightened in recent weeks. Although Whitmer, who issued some of the most draconian lockdown orders in the country during the COVID-19 outbreak, has been comfortably ahead throughout the campaign, Dixon has closed the gap significantly, with most polls showing only a 2-3% difference between the two.