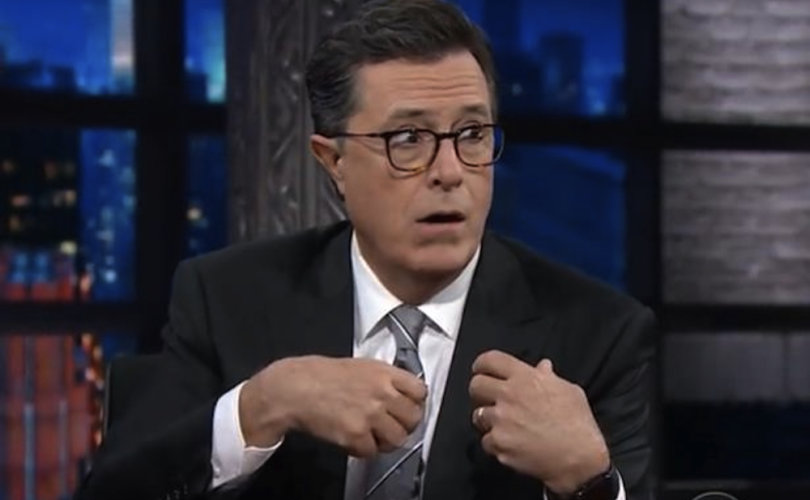 Co-creator Nick Kroll visited the late night talk show Wednesday to promote his latest project, “Big Mouth.” The show is about adolescents awkwardly going through puberty and discovering the sexual world around them.

Colbert introduced Kroll with great fanfare and eventually asked about the show. “Is this the kind of show that parents would sit down and watch with their children?”

The question itself got mocking laughs.

Kroll smiled and said jokingly, “Steve, I’m going to leave that up to each and every individual parent.” Then he admitted, “It’s very dirty.”

Kroll got a lot of laughs with the line that his show “is kind of like the sex-ed video I wished I had gotten to see, but also, like, filthy.”

Colbert told his audience that they had a clip to preview “Big Mouth,” but CBS told him it was “too vulgar to show.” The late night host said his staff censored it heavily, and yet CBS still said it was too vulgar to show.

“So we’re going to show it anyway,” Colbert quipped, to more laughter.

The clip was blurred and almost completely bleeped out.

“It’s so much better — and worse — that what you blurted out,” Kroll quipped back.

Most offensive to pro-family advocates is the cartoon literally showing the genitals of pre-adolescent children.

As LifeSiteNews reported, pro-family advocates say the show sexualizes children and is fantasy food for pedophiles.

Anthony Khoury of the Vigilant Community speculated on a possible motive for Netflix besides revenue: “Hollywood and the world elite are full of child (molesters) and they want to normalize their derangement.”

After Colbert promised a donation to the Puerto Rico hurricane relief for every celebrity that posts their 13-year-old “pubescent” picture on social media, he made the sign of the cross.

“Big Mouth’s” entire series of 10 episodes is to be released Friday on Netflix.

The interview, including the bleeped out clip, can be found here.