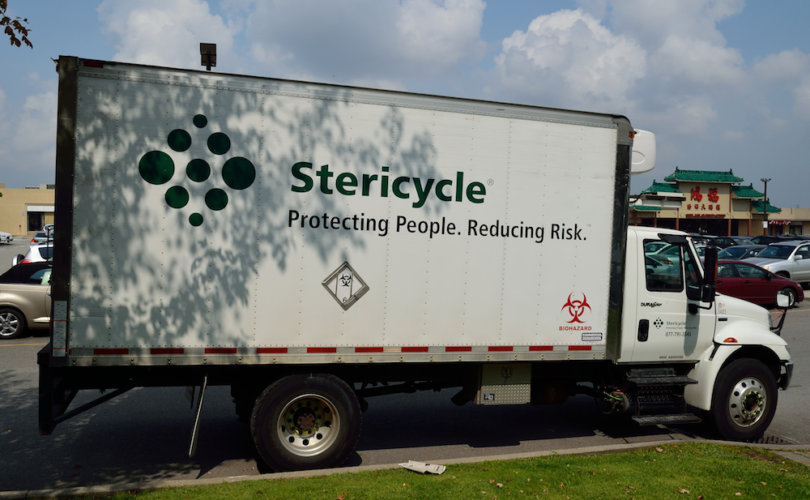 LAKE FOREST, Illinois, April 11, 2016 (LifeSiteNews) – Stericycle, the company that authorities say transports the bodies of aborted babies to landfills, lost its bid to stop pro-life canvassers from exposing the company's actions. A judge in a Chicago-area court this morning denied the company's request for a temporary restraining order (TRO) against a group distributing postcards around the CEO's neighborhood.

Created Equal distributed fliers depicting aborted babies in the Illinois community of Lake Forest on March 29 and 30 and saying the company is complicit in their dismemberment.

Stericycle denies any wrongdoing, saying it does not dispose of unborn babies' bodies. The corporation's president and CEO, Charles A. Alutto, told local media, “I believe Stericycle is being unfairly targeted.”

Mark Harrington, the national director of Created Equal says the company is playing a game of semantics.

“However, babies are not 'complete' after being dismembered, decapitated, and disemboweled in standard abortion methods,” Harrington said. “Their broken parts and torn tissue are categorized by Stericycle as 'pathological waste,'” which the company willingly transports.

He wrote a letter to Alutto on February 10 with a sample flier that would be handed out in his community to raise awareness of Stericycle's actions. It included Alutto's home address and business phone number. If the company would stop providing services to abortionists, Harrington said, he would not go forward with the campaign.

This morning, Stericycle asked a Lake County judge to stop Created Equal from distributing negative information about the company.

“This lawsuit seeks to silence speech and leafletting protected under the First Amendment,” Created Equal's legal brief states. The group dismisses Stericycle's “sweeping, generalized, and unsupported statements that they will lose business, customer relationships, and customer goodwill to support their assertion of irreparable harm.”

That's overkill, according to the pro-life advocates' attorney.

“The Supreme Court of the United States, in a case strikingly similar to this one, said that nobody has the right to be ‘free from public criticism of his business practices in pamphlets or leaflets,’” said Peter Breen of the Thomas More Society, which is based in nearby Chicago. “The irreparable harm of losing the ability to practice free speech,” even for a short period of time, “outweighs Stericycle’s theoretical potential business reputational harm,” whether in the immediate future represnted by a temporary restraining order or “in the future.”

The judge agreed, denying the motion.

“We will not be bullied into silence. This failed attempt to bully us only confirms that Stericycle is more interested in doing the dirty work for Planned Parenthood than being a respectable medical waste company,” Harrington said today after the result. “Disposing of aborted babies for Planned Parenthood has its consequences.”

Harrington says there's a simple way for the company to end all Created Equal's interest in its activities.

“The campaign to expose Stericycle continues,” he said.