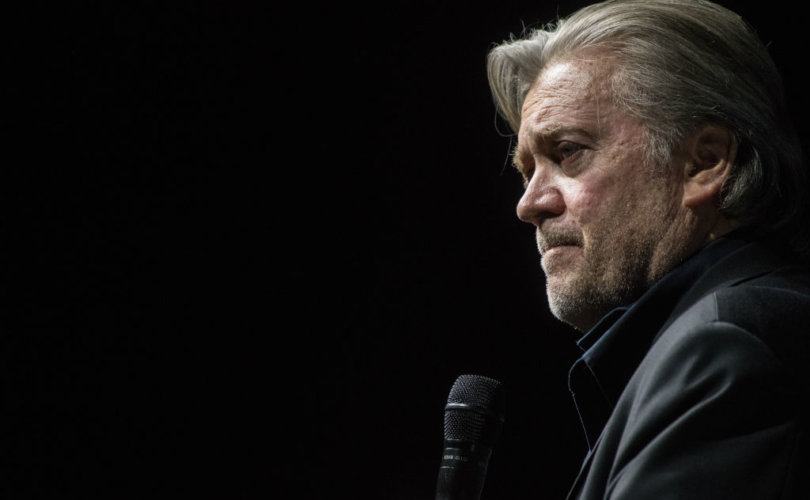 June 28, 2019 (LifeSiteNews) – U.S. political activist Steve Bannon, a baptized Catholic, is clarifying what he holds when it comes to hot-button issues of the Catholic faith, specifically when it comes to topics such as married priests, ordaining women, homosexuality, and the Church’s moral teachings in general.

Bannon’s clarification comes in light of Dr. Frederic Martel, a homosexual activist and author of the controversial book In the Closet of the Vatican, recently claiming that Bannon had endorsed “changing profoundly” the Church’s sexual doctrines and other moral teachings.

President Trump’s former strategic adviser and Martel had met in Paris on May 19 to discuss Martel’s book on homosexuality in the Vatican and about the possibility of making a film about it.

Martel told LifeSiteNews about the meeting with Bannon and about the conversation they had, stating that Bannon thinks “if the majority of bishops are either homophile or gay, there are no solutions to change the Church without changing profoundly her doctrine on celibacy, chastity and marriage.” Martel also made similar statements about the meeting pertaining to what he said Bannon thinks about Catholic moral teaching to BuzzFeed on June 25 and in an article in the online French magazine Slate the following day.

LifeSiteNews reached out to Bannon for comment about Martel’s reconstruction of their conversation, asking questions specifically pertaining to Bannon's position on various Catholic teachings. Bannon answered those questions, later telling LifeSiteNews that he is “no theologian, just an average Catholic.”

The full interview is below

LifeSiteNews: Do you believe that the introduction of married priests would solve the abuse crisis, or are you rather only open to discussing this as a possibility?

Steve Bannon: The modern media-saturated world is making formation of young men more difficult with each passing year. Married priests are not the solution to the sexual abuse scandal, nor are they the solution to the massive vocation crisis we see in the Church. The Orthodox Church, where priests are expected to marry, is also suffering a virtually identical crisis.

Married priests are a solution offered by the Progressive wing of the Church to problems it has created. The Traditionalist wing does not need to consider married priests, because it does not have a vocations crisis. This needs to be addressed with brutal honesty — we no longer have the luxury of turning away from reality.

In fact, this reality may be the main legacy of Francis's papacy: that both wings have now been entrenched — the Traditionalists and the Progressives. This makes the dividing lines of the forthcoming battles much more sharply drawn, and easier for people to take a side. The paradigm is between Traditionalists and Progressives, i.e. between Catholics who believe the Vatican Council is part of the problem rather than part of the solution.

And here’s the rub — the demographic crisis over the next two to three generations is going to totally wipe out the Progressive Church. All that will be left going forward is that section of the Church in the West that never fatally compromised itself with modernity — the Traditionalists; and in the global south, those churches which are not the heirs of the ideals of cultural Marxism.

LifeSiteNews: Do you support the idea of ordaining women?

Steve Bannon: There seems to be unanimity among the popes that the Church does not have the authority to ordain women. Regardless, the real issue isn’t women’s ordination — it's genuine lay leadership irrespective of gender.

LifeSiteNews: Could you re-state to me, for quotation, that you are not anti-homosexual, but that you believe that homosexuals in the clergy are a problem?

Steve Bannon: Men with same-sex desires are not the problem in the way outlined by Dr. Martel. According to Dr Martel's book, In the Closet of the Vatican, it's the homosexual cabal controlling the Vatican; their behavior and their actions — their lack of transparency and their lack of accountability to the laity — that is the problem.

If the Church is to regain its lost credibility on human sexuality it has to ordain men capable of visibly living the Truth they are trying to proclaim. But someone's sexual tendencies are not the problem if they practice celibacy and chastity.

To my mind, we need to return to clear doctrine and making the priesthood a vocation again. I read constantly of many young men who left the seminary after being harassed.  The atmosphere in these seminaries appears to have been toxic. There is no “one solution,” but getting things right in the Church will go a long way to making the priesthood attractive again.

LifeSiteNews: Do you consider, similar to Frederic Martel, that the Church should dwell less on moral issues and concentrate more on social issues?

Steve Bannon: The Church has to dwell on moral issues — that's why it's a living institution with a daily impact on people's lives. The central problem is that the Church hierarchy loses credibility every day on moral issues because, according to Dr. Martel’s book, it isn’t living what it is preaching. We must confront this, and we must confront this now — or we risk losing everything. It's the reason Dr. Martel’s book is invaluable: despite all of its obvious faults and regardless of what devout Catholics think of the doctor, his lifestyle, or his motivations, he has done a service in showing Catholics and the world the scale and depth of the problem.

LifeSiteNews: Do you have anything else to add?

Steve Bannon: I'm no theologian, just an average Catholic, but something extraordinary has happened over the last 90 days: an onslaught of charges of heresy against Pope Francis by some of the leading theologians in the Church today.

In the Open letter to the bishops of the Catholic Church, 19 theologians, led by the renowned Father Aidan Nichols — the first lecturer of Catholic theology at Oxford University since Henry VIII and the Reformation — accused the Pope of heresy.

Yesterday Cardinal Brandmüller, a wise and holy man, accused the Synod of Bishops on the Amazon of heresy and apostasy.

The Church is now at an inflection point that we haven’t seen in 700 years: the Pope is walking on a razor's edge. If this continues, we are on the road to a major schism in the Church.