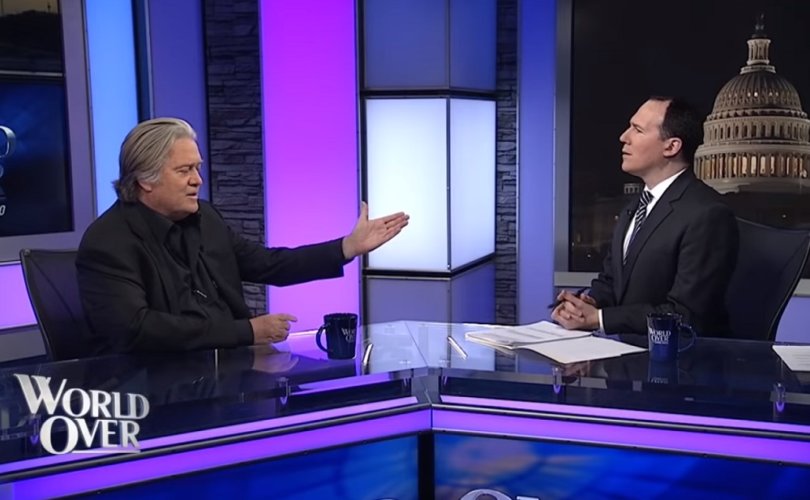 Steve Bannon with Raymond Arroyo on World Over.EWTN via YouTube.

WASHINGTON, D.C., April 12, 2019 (LifeSiteNews) — Steve Bannon’s emergence from political obscurity continued last Thursday during an appearance on EWTN’s The World Over with Raymond Arroyo, where he criticized Pope Francis not only for siding with “globalists” on immigration but also for striking a deal with communist China on the nomination of Catholic bishops.

Since unceremoniously exiting the White House in August 2017, a move that angered many of President Trump’s America First supporters, the former presidential adviser has largely remained out of the public spotlight, preferring to spend most of his time in Europe helping nationalist politicians. In recent months, however, he’s delivered remarks to the Oxford Student Union, was interviewed by CNN and NBC, appeared on CBS, and spoke to Politico.com. Most of his comments have been about the 2020 election and foreign affairs.

Bannon and Arroyo’s wide-ranging discussion (watch below) touched on everything from the Vatican sex abuse summit and the political ramifications of the Mueller report to Bannon’s Italy-based “gladiator” school aimed at defending what he calls “the Judeo-Christian West.” The majority of the pair’s conversation was spent analyzing the worldwide populist movement and the Far East.

China is “an existential threat” to the United States, said Bannon, who recently founded Citizens of the American Republic, a non-profit that promotes economic nationalism. “They’ve been at economic war with us for 25 years[.] … They’re trying to become the new hegemon in this totalitarian, mercantilist system they’ve got.”

Bannon said China wants to unite the Eurasian landmass and boost its manufacturing industry but Trump is not allowing that to happen. He’s the first president in 30 years to stand up to them and to put a halt to the U.S.’s “managed decline,” Bannon asserted. Trump is also preventing America from becoming a “tributary state” of China.

Bannon, a 65-year-old Latin Mass–attending Catholic, said Rome is throwing faithful Catholics in China under the bus by coming to an agreement with President Xi, who is “more radical than Mao Zedong.” Reminding Arroyo that Xi snubbed the pope when he was in Italy last month, an astonished Bannon said church buildings in China are being demolished on a daily basis and that Chinese elites are destroying religion and acting like slave masters over ordinary citizens. He called for openness and transparency on the “secret deal” reached between the Vatican and China. Bannon suggested that Rome listen to Cardinal Zen of Hong Kong instead of “cutting deals with dictators.”

“Look, the pope is the vicar of Christ. Nobody makes an argument about that … on the things of dogma and theology. But the administrative and the political side of the Church are different,” he said.

Bannon spoke at a roundtable event in Washington last month hosted by an organization called the Committee on the Present Danger: China. Among the group’s founding members is Dr. Steven Mosher, an expert on population control and China whose essays have appeared on LifeSiteNews.

Bannon also called out Pope Francis for going after the “populist, nationalist sovereignty movement” and for taking “the side of the globalists — the Macrons of the world, the Merkels of the world — in every situation.” Bannon said it’s “unacceptable” for the pope to “hammer” and “deride” politicians and Catholics who are simply trying to solve the migrant crisis in order to get their countries back so they don’t implode. Catholic social teaching on immigration should revolve around sovereignty and subsidiarity.

Bannon, who previously accused U.S. Bishops of being “one of the worst instigators” of open borders, is not the only Catholic concerned with immigration. African Cardinal Robert Sarah, the current prefect for the Vatican’s Congregation for Divine Worship, has warned that there are some who are exploiting the Word of God to promote multiculturalism, an apparent swipe at Pope Francis. He’s also predicted that Islam will “invade the world” and that the “West will disappear” if it is swamped with foreigners. The flow of migrants into Europe is “tragic for the identity of peoples,” he's also stated. Bishop Athanasius Schneider of Kazakhstan has similarly remarked that mass migration is an “orchestrated” plan to water down Europe’s Christian heritage.

Bannon touted his Trisulti, Italy–based training academy as a place where persons could visit in order to equip themselves with the ideas and skills needed to go on television, into boardrooms, and elsewhere in the public domain to defend “the nation state” and Judeo-Christian values. He mentioned France’s Marion Maréchal Le Pen as someone taking up the pro-sovereignty, anti-globalist cause as well.

Interspersed throughout Arroyo’s and Bannon’s penetrating conversation was the clergy abuse crisis, which Bannon referred to as the “greatest crisis since the Reformation.” Bannon pointed out that the abuse summit in Rome didn’t mention the phrase “zero tolerance.” He said there isn’t a real plan in place to deal with the crisis and predicted the Church will face RICO (Racketeer Influenced and Corrupt Organizations) lawsuits. He advised that the laity need to be involved in future oversight.

The interview concluded with Bannon calling the Trump-Russia collusion story “the biggest hoax in American media history.” He said President Trump is purposefully directing people’s attention to the shadowy beginnings of the investigation. “Look, when President Trump starts using the word ‘treason’ and talks about the FBI … when he says that guys at these [television] networks should be fired, he’s coming off the chain. If the Democratic Party thinks he’s going to pull back, he’s not.” Bannon suggested that Trump’s language at his rally in Grand Rapids, Michigan last month was an indication he wants to go after the perpetrators of the hoax.