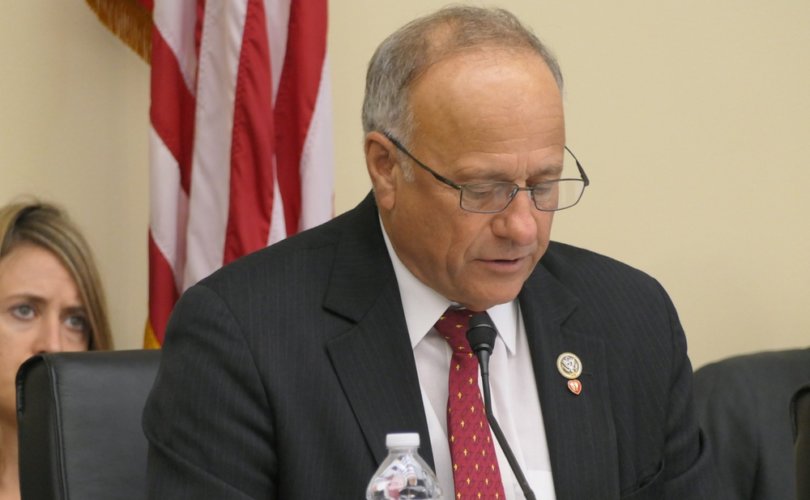 IOWA, November 6, 2018 (LifeSiteNews) – As Iowans go to the polls, pro-life U.S. House incumbent Rep. Steve King is under fire for criticizing one of his own party’s top committees for touting the homosexual relationship of a past GOP candidate in California.

King, who represents Iowa’s 4th Congressional District, is the lead sponsor of the Heartbeat Protection Act, which would ban abortions on any baby with a detectable heartbeat. He is facing pro-abortion challenger J.D. Scholten.

On Monday evening, video surfaced of a campaign event in which King criticized the National Republican Congressional Committee (NRCC) for one of its past endorsements.

�� Now @SteveKingIA is attacking the NRCC for backing a gay candidate:

“They sent money over to support a candidate in a primary in California who had a same-sex partner that they put all over glossy mailers…That's hard to write a check to those guys when they do that.” #IA04 pic.twitter.com/TXrF67KIoE

“They sent money over to support a candidate in primary in California who was a, uh, had a sex-same partner that they put all over glossy mailers,” King says in the video. “I don’t know if they were holding hands, or what was the deal. It’s hard to write a check to those guys when they do that.”

“So I’m hopeful that we get conservative leadership in the House,” he added.

The candidate is not named in the clip, but King appears to be referring to Carl DeMaio, whom the NRCC endorsed in 2014 for the House of Representatives. The NRCC claimed at the time DeMaio was part of a group of “Young Guns” who had “met a series of rigorous goals that will put them in position to win on Election Day”; DeMaio went on to lose to Democrat incumbent Scott Peters.

While numerous left-wing outlets denounced King over the clip, with former conservative pundit and atheist CNN host S.E. Cupp calling him a “cancer on the country” whose “bigotry knows no bounds,” DeMaio’s open homosexuality was only the start of the reasons his GOP-backed candidacy was controversial at the time.

He supported both legal abortion and the redefinition of marriage to include same-sex couples (prior to the Supreme Court taking the decision away from voters in 2015’s Obergefell v. Hodges), suggested he wanted to push the GOP to embrace what he euphemistically called “equality” on homosexuality, and was rocked in the campaign’s home stretch by allegations of sexual harassment and lewd workplace behavior.

Former policy director Todd Bosnich, who is also homosexual, claimed DeMaio had fondled himself in his presence and grabbed Bosnich’s genitals once during a car trip. Former regional political director Justin Harper claimed DeMaio intentionally exposed himself in the men’s restroom.

King’s criticism of the NRCC appears to be in response to its chair Steve Stivers, who is also a congressman from Ohio, accusing him of associating with “white supremacy” for meeting with figures from the the controversial Austrian Freedom Party and endorsing Toronto mayoral candidate Faith Goldy.

King denies any association with racists or extremists, and appears likely to win re-election with a 7-point lead over Scholten in RealClearPolitics’ polling average.