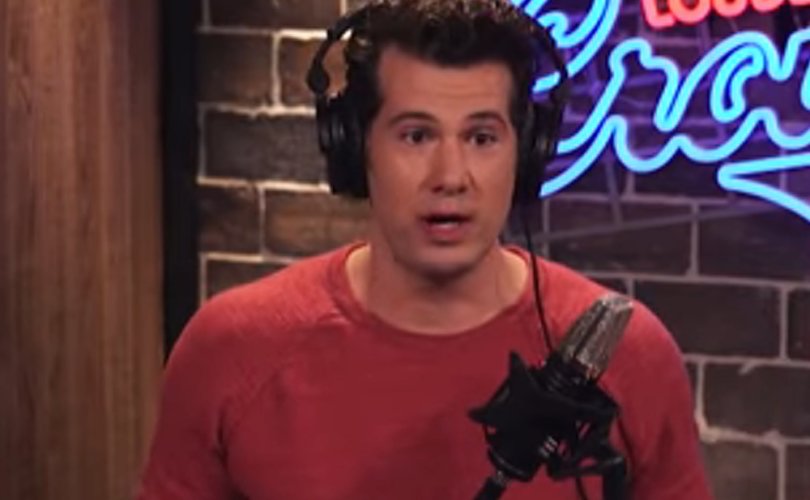 Crowder thanked Wolf for making her second appearance on his show, noting that many abortion supporters would have been unwilling to debate the issue at all. Both participants were civil throughout the entire interview, though Crowder firmly challenged her reasoning on multiple fronts.

Wolf admitted that by the fourth month of pregnancy, once the baby is moving inside the womb, “there’s literally no way you can pretend there’s not a being,” which necessitated a change in the pro-choice movement’s “soulless” language about “clumps of cells.” She also explained that her idealized solution to the abortion debate would be for abortion-on-demand to be legal in the first trimester, coupled with government-subsidized contraception and maternity support, as well as streamlined adoption rules.

However, she did not specify what kinds of abortion restrictions she would accept in later trimesters, and she maintained that the preborn “being” was not a “life,” but merely the “beginning of what will be a life.”

Crowder focused most of his cross-examination on this point, attempting to get her to give a precise explanation of when the fetus does constitute a life.

“I don’t have a simple answer for you,” Wolf responded. She complained that “Catholicism has really made this an either-or conversation,” whereas in her own faith, Judaism, “you have 40 days before it is a life.” She also invoked her own pregnancies (neither of which ended in abortion), during which she suggested “maternal instinct” told her abortion would have been acceptable in the first 40 days but not afterward.

“That’s a very subjective answer,” Wolf admitted, but “I do absolutely believe” that aborting in the first trimester is “not the same thing as killing a baby.”

The conversation then turned to contraception, which Wolf claimed even affluent college students “really can’t afford.”

“If you're having sex in 2018 and you can't afford or know about contraception, it's from a lack of trying,” Crowder maintained.

The conversation then returned to abortion, where Crowder challenged Wolf’s rhetoric that abortion was a question of the “woman’s body.”

“Men and women literally cannot understand each other around this,” Wolf claimed, invoking her gender and experience with pregnancy in place of an answer. “Listen to me, I’ve had two kids, okay?” Crowder responded by pointing out, “my wife agrees with me, and every woman who works on this show.”

Wolf next made the strange claim that a fetus was “both a separate being and part of your body.” She offered no evidence, but again fell back on the claim that “if you’ve never experienced it, you cannot understand that.” She did point out that preborn babies use the womb for protection and nourishment, but such details only establish that the two bodies are connected, not that one is somehow an extension of the other.

In fact, long-settled biological criteria establishes that a whole, distinct, living human being is present upon fertilization, with different DNA from that of his or her mother.

Observing that this connection continued throughout the entirety of pregnancy, Crowder asked, “then why does day 40 matter at all,” because the logic she laid out could just as easily be applied to a baby “exiting the womb.”

Wolf admitted that she didn’t have a “black-and-white answer” to the question, and instead returned to invoking her status as a mother as well as observations about other women’s experience with pregnancy. She claimed that “having thought deeply about the issue” convinced her that “an intellectually pure solution” was not possible at all, but following her example would still lead to “humane policies.”

“There is nothing humane about ending another life that is not your own,” Crowder answered, which was “the only question that matters.” Wolf once again admitted that she “cannot and will not give you a black-and-white answer on this,” but maintained that she couldn’t “because I have a sense of integrity and for my lived experience as a woman and as a mother.”

At this point, Crowder slammed Wolf for playing “identity politics,” then suggested that “if you don’t have an answer, you can err on the side of not ending a life.” She replied simply that she did not believe a just-conceived zygote was a life, and that because these are “deep, deep issues,” they should not “be reduced to sound bites.” Crowder retorted that they also should not be reduced to policies that involve “my direct subsidization of someone else’s opinion despite the fact that there’s no answer there.”

After the interview concluded, Crowder told the audience that while he appreciated Wolf’s concession that abortion “shouldn’t be celebrated” or be completely on demand, ultimately her argument still “ended up sliding that way” because her “part of the mom” refrain was the only “intellectually consistent argument she could make.”

“This is where we deal a lot with the left and feminism,” Crowder said. “We're now so far off the beam” that her answer was to err on the side of “liberty” in lieu of an actual answer – but the feminist definition of liberty was “a woman has the right to terminate another life, and of course it has to be taxpayer-funded or we hold a gun to your head and say if you don't tax, if you don't fund abortion and subsidize that we're we're going to force you to subsidize contraception.”

“I don’t believe that the argument holds water,” he concluded.