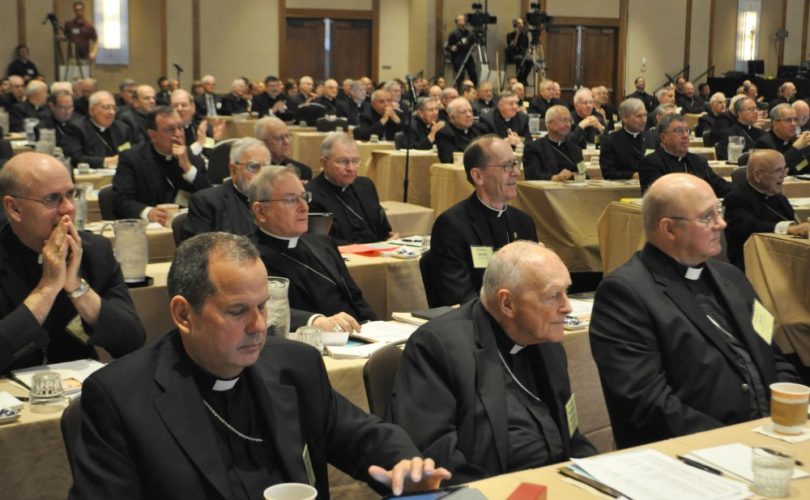 The U.S. Bishops meet in St. Louis for their spring general assembly in June 2015. In the middle is ex-Cardinal Theodore McCarrick, who resigned from the College of Cardinals in 2018 after being credibly accused of sexually abusing a minor.Lisa Bourne / LifeSiteNews

ST. LOUIS, MO, June 12, 2015 (LifeSiteNews) — With the forthcoming papal encyclical on the environment a week away, the U.S. Bishops are calling “climate change” a moral issue, insofar as it impacts human life, and preparing to help Catholics be open to taking in Pope Francis' message on the environment.

While they have not yet seen the document, the bishops say they have a good sense of what the Holy Father will say, between Scripture, Catholic tradition, and papal teaching from the current and earlier pontificates, and they are ready to teach Catholics about the impending encyclical on “the awesome responsibility of stewarding creation.”

Miami Archbishop Thomas Wenski, chair of the bishops’ Committee on Domestic Justice and Human Development, told a press conference after his presentation on the document at the U.S. Bishops spring meeting that the encyclical will carry significant weight for Catholics and “require prayerful attentiveness.”

The USCCB is planning to have homily notes, bulletin inserts, and other material for Catholic parishes and schools.

“The Pope and we bishops are not scientists, but we are pastors,” Archbishop Wenski said in his presentation to the assembly, “and in so far as climate change affects human beings, it is a moral issue.”

Pro-life concern about the encyclical

The encyclical, titled “'Laudato Si': On the Care of Our Common Home,” meaning “praised be,” from St. Francis' Canticle of the Sun, has caused concern from many pro-life advocates because the Vatican’s preparations for the encyclical have seemed to compromise on the Church’s longstanding pro-life witness.

The encyclical comes seven weeks after Pope Francis welcomed two of the world’s leading population control advocates to the Vatican for a climate change symposium.

Pro-life and pro-family groups questioned the April symposium’s claim to have a “special focus on the most vulnerable,” seemingly ignoring the plight of unborn children, and the fact it featured two known abortion proponents, UN Secretary General Ban Ki Moon and Doctor Jeffrey Sachs. The men also had a private audience with the Holy Father in conjunction with the event.

Adding to concerns, the chancellor of the Pontifical Academies of Science and Social Sciences, which hosted the “Protect the Earth, Dignify Humanity” symposium at the Vatican, rejected criticism over the Holy See’s partnership with pro-abortion population controllers.

Archbishop Marcelo Sánchez Sorondo said, “The climate crisis leads to poverty and poverty leads to new forms of slavery and forced migration, and drugs, and all this can also lead to abortion.”

The archbishop also claimed that terms like “reproductive rights” in the UN’s Sustainable Development Goals – long taken by the Vatican and pro-life organizations as code words for abortion – could be interpreted to align with Catholic teaching.

“They speak of access to family planning and sexual and reproductive health and reproductive rights,” the Vatican prelate said. “The interpretation and application of these depends on governments. Some may even interpret it as Paul VI, in terms of responsible paternity and maternity.”

Archbishop Wenski, in his speech at the U.S. Bishops’ meeting, speculated about the encyclical’s focus.

“The Pope is likely to speak about the idea of an ‘integral ecology,’ the concept that our care for one another and the way we relate to the environment are intimately related,” he said.

The bishops say they expect to see the pope draw a connection between disrespect for the environment and human life.

“For the past two years, Pope Francis has been challenging us to resist the ‘throwaway culture’ and build a culture of solidarity and encounter,” said Archbishop Wenski. “He will surely continue to ask the world to abandon practices that casually discard both people and the gifts of the earth.”

The question of why the environment had not been previously raised to the same level of concern for the Church as things such as abortion and homosexual “marriage” was posed to a handful of the bishops at the session’s press conference.

Baltimore Archbishop William Lori responded that having an encyclical written on the environment “automatically raises it up.”

“I think to proclaim the Gospel means we have to read the signs of the times, and I think that the Holy Father is doing just that,” Santa Fe Archbishop John Wester said.

We are seeing a confluence of some important themes of today, he said, including poverty, the dignity and sanctity of human life, the environment and ecology.

“They’re all coming together in a very important way,” said Archbishop Wester, “and I think that the Holy Father is helping us by, as Archbishop Lori says, raising it up and helping us to see how they’re all integrated.”

At the same time the bishops feel they have a sense of what the pope may say in the encyclical, their remarks on the document did acknowledge the signature unpredictability of the Pope Francis pontificate.

Philadelphia Archbishop Charles Chaput said that thus far the Church has not yet entered into the debate on whether “climate change” is man-made, and if it is, then who is to blame and how it should be addressed. It isn’t certain whether Pope Francis will take a position in the document, he noted. “But who knows what will happen with this encyclical?”

“There will be more, and no doubt much that is unexpected as well,” Archbishop Wenski told the bishops gathered at the assembly. “As shepherds, we can help to create space for people of good will to consider the Holy Father's message on the environment prayerfully, humbly, and with open hearts and minds.”