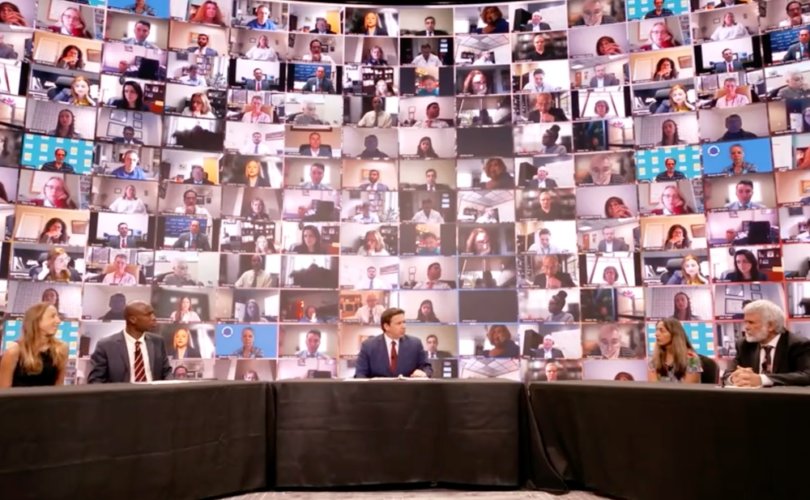 WEST PALM BEACH, Florida (LifeSiteNews) — Florida Republican Gov. Ron DeSantis hosted a roundtable discussion with highly credentialed physicians and epidemiologists on Monday with the aim of “ending COVID theater once and for all.”

“Over the past two years, the data has shown us what works and what doesn’t work. It is long past time to stop the COVID theater,” Gov. DeSantis said, according to a statement put out by the governor’s office on March 7.

“In Florida, we told the truth, we let the data drive our response, and we let Floridians make decisions for themselves and their children. As a result, Florida is in a better spot than states who used fear mongering and mandates,” continued DeSantis, who is well-known for consistently opposing coercive COVID jab mandates and restrictions, and made headlines this week for encouraging a group of students to take off their masks.

Governor DeSantis hosts a roundtable with physicians nationwide on ending COVID theater once and for all. https://t.co/dYRGpMEVS7

Monday’s roundtable discussion featured many well-known academics and physicians who have routinely spoken out against lockdowns, forced masking, and experimental COVID jab mandates throughout the COVID-19 response, which has led to catastrophic increases in depression, suicidality, drug addiction, job loss, as well as a massive economic fallout.

During the discussion, experts assembled by DeSantis slammed the authoritarian measures enacted by politicians in the United States and throughout the world, arguing that “the medical establishment” and politicians “have continually ignored data, instead choosing to stoke fear and push for lockdowns and mask mandates in their fruitless attempts to ‘stop the spread.’”

“The lockdowns were an enormous catastrophic mistake that should never be repeated,” said Bhattacharya, who is a professor of Health Policy at Stanford University Medical School.

“When we think about lockdowns, we should recoil with horror because the policies we followed have violated not just medical ethics, but also crushed the ability for scientists to discuss openly with each other facts and evidence,” Bhattacharya said. “It’s taken a great amount of effort and willingness to face abuse in order for scientists to speak up and many have been silenced. I think [we need] the restoration of the freedom for scientists to discuss with one another openly what the evidence actually says without fear of repression that we’ve seen during the pandemic in order to support the lockdowns.”

Bhattacharya added that he believes that while scientists should be able to “advise” the public on matters of health, they should not be authorized to “dictate policy” as they have done during the pandemic.

Other experts, including Dr. Malone, took aim specifically at forced vaccinations, especially for young children who are at extremely low risk from the coronavirus. Children ages 0 to 17 represent just .01 percent of all U.S. deaths from the virus, according to data from the U.S. Centers for Disease Control and Prevention (CDC).

Malone also praised the Florida government for “enabling physicians [and providing] the latitude to provide early treatment to patients,” something denied to many physicians throughout the country who have been barred from providing discretionary early treatment options to COVID patients.

Dr. Kulldorff, the scientific director for the Brownstone Institute and a fellow with Hillsdale College’s new Academy for Science & Freedom, also offered a well-reasoned takedown of mandatory jabs for kids during Monday’s session.

“Right now, I think the benefits of vaccinating children are very small,” Kulldorff said. “We know that there’s a risk of myocarditis for young boys and young men, but also for girls. There might be other adverse reactions that we don’t know about yet. So for children, the benefits we know are at best, very small and we don’t know what the risk benefit ratio is. I think under those circumstances, it’s unethical to mandate vaccinations for children.”

Kulldorff also criticized the implementation of “vaccine passport” schemes, which have effectively segregated society between the vaccinated and unvaccinated in an alleged effort to prevent the spread of the virus.

Vaccine passport requirements have been imposed in cities and countries throughout the world in spite of the fact that coronavirus vaccine trials have never produced evidence that the vaccines stop infection or transmission, and strong evidence that the “vaccinated” are just as likely to carry and transmit the virus as the unvaccinated.

“If you have had immunity, you don’t need vaccines, and that by itself sort of reduces any argument for having a vaccine mandate or vaccine passports,” Kulldorff said.

“Today, we were able to bring doctors from around the world to discuss COVID-19 and the lack of data to support mandates,” Ladapo said. “Scientific debate takes place in a public forum – it is not hidden in federal bureaucracy. We need to get back to living – not hiding in fear.”

At the end of the roundtable discussion, Ladapo announced that the state of Florida would be the first to “officially recommend against the COVID-19 vaccines for healthy children,” bucking guidance from the CDC that calls for universal vaccination for all children ages five and up.

Ladapo said researchers are “scraping at the bottom of the barrel” when attempting to “quantify with any accuracy and any confidence” the potential benefit for vaccinating healthy children.