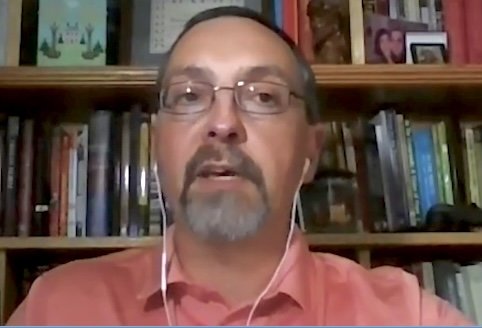 TUCSON, Arizona (LifeSiteNews) – A Catholic university professor has hit out at the global COVID shot push, detailing “broad … violations of ethics” in rolling out the jabs, largely based on a “disproportionate and unscientific as well as irrational … misrepresentation of science.”

Speaking at the latest “Stop the Shot” conference, “The Vaccines & Children: What are the Risks?” Dr. Stephen Sammut, professor of psychology at the Franciscan University of Steubenville, Ohio, (FUS) focused his attention on the ethical issues that have arisen in response to the spread of COVID-19 and the subsequent push to have children jabbed against the virus.

Sammut – who also holds a Ph.D. in neuroscience and has a clinical background in pharmacy – argued that the idea of “the common good,” which he described as “the good of all people and the whole person,” has been “abused in both religious and secular circles to push a narrative that’s neither scientific nor supported by common sense.”

The professor noted that the teachings of the Catholic Church “emphasize consistently principles that are relevant here,” putting special emphasis on the principle of subsidiarity.

Subsidiarity is defined in the Catechism of the Catholic Church n.1883 as follows:

“A community of a higher order should not interfere in the internal life of a community of a lower order, depriving the latter of its functions, but rather should support it in case of need and help to co- ordinate its activity with the activities of the rest of society, always with a view to the common good.”

On this basis, Sammut explained that “the authority of the family, which along with stability and family relationships, constitutes the foundation of freedom, security, [and] fraternity within society.” This, coupled with the authority of individual conscience, in which a “person is not to be forced to act in a manner contrary to his conscience,” Sammut suggested that government interference in the functions of the family during lockdowns has violated the common good.

The injustice of lockdowns stretches into the spiritual life, Sammut contended, lamenting the closure of churches and the subsequent usurpation of the right to religious freedom and worship “based on unscientific and baseless mandates.”

“What we’ve seen has amounted to a direct attack not only on the body and the mind, but also on the soul of humanity; attacks that amount to crimes against humanity,” he said.

“From a scientific, moral, and spiritual perspective, those entrusted with leadership at both the civil and religious levels have not stood up for those who have been entrusted to their care, and they really need to do so.”

Speaking to aspects of his scientific background, Sammut explained that anyone working in clinical trials is “bound by numerous ethical standards that are meant to respect the integrity and dignity of the animal at the pre-clinical level and the human person at the clinical level.”

Not only are such ethical standards “intrinsic to humanity,” he said, but “they are also outlined in the “Nuremberg Code, in the Helsinki Declaration, and also in the Code of Federal  Regulations about the protection of human subjects here in the U.S.”

“Yet we’ve observed in the past two years significant manipulation, violation, and abuse of those ethical standards,” Sammut added.

The highlighted standards – which cover issues regarding consent, necessity, and risk – are being violated broadly, he continued, especially considering that the current stock of experimental, abortion-tainted COVID jabs have been targeted toward vulnerable groups like the elderly and young children while a “significant number of side effects have been observed” from the shots.

“What we are seeing amounts to unethical and non-consensual experimentation,” Sammut charged. “The measures that have been implemented will impact and scar humanity for generations, and we’re seeing this in the scientific literature.”

Explaining, Sammut referenced the plethora of evidence relating to the efficacy of mask wearing, for example, which demonstrates that any mitigation of viral spread achieved by donning a face covering is “statistically insignificant” while at the same time bringing “numerous physiological … [and] psychological consequences … most especially in children.”

He also criticized the supposed efficacy of government lockdowns to save lives, highlighting the cruel “deprivation of interaction with loved ones, even when close family and relatives are at the point of death.”

“These are inhumane measures,” he said, adding that “even in an animal experiment we have to justify appropriately why you should isolate an animal … and yet we have done this [forced isolation] for humans without any proof of benefit, but with substantial proof of negative impact.”

To wit, an April study analyzing some 80 research papers on lockdowns across the world concluded that shutting people in their homes during COVID-related lockdowns has caused around 282 times more long-term damage than it has brought benefits.

Sammut raised strong objections to the widely observed government coercion of COVID shot uptake across the globe, noting the “disproportionately higher” occurrence of adverse events associated with the experimental jabs compared with that seen with other vaccines.

The Vaccine Adverse Event Reporting System (VAERS), a database of vaccine injuries in the U.S. co-run by the Food and Drug Administration (FDA) and the Centers for Disease Control and Prevention (CDC), shows that, in the days and weeks after injection with a coronavirus shot, at least 18,461 people have died.

The data, collected between December 14, 2020, and November 5, 2021, details a staggering 875,654 reports of injuries in total. While causation is not explicitly confirmed through the  VAERS reporting system, neither can it be presumed that all side effects are reported. Indeed, one study in 2010  found that “fewer than 1% of vaccine injuries” are reported to VAERS, suggesting the actual numbers  of  deaths  and  injuries  are significantly higher.

Since VAERS is a passive system, it is inherently subject to underreporting. For example, a confidential study conducted by Connaught Laboratories, a vaccine manufacturer, indicated that “a fifty-fold underreporting of adverse events” is likely.

When contrasted with the low mortality rates recorded involving the virus, “less than 1 percent up to about the age of 65” Sammut said, the imposition of mask and vaccine mandates marks a “disproportionate response.”

In fact, the professor stressed that the low COVID death rate stands in stark contrast to the “significant increase we’ve seen in mental health disorders, including depression, anxiety, trauma, PTSD” resulting from the government’s response to the virus.

“Substance abuse and deaths from overdoses [have increased] 30 to 50 percent,” he added. “Suicide, domestic violence, and the use of pornography [are] up about 42 percent here in the U.S.”

“It’s abundantly clear,” Sammut stated, “that these measures have severely negatively impacted the physical and mental well-being of adults.” Moreover, “the impact on children is many times more detrimental because of the significant brain and physical development that is taking place during the crucial years of childhood and adolescence.”

In a final exhortation, Sammut implored listeners to be active in their resistance of “unscientific mandates.” “It’s the obligation of every human individual to be informed … and to challenge those in authority as appropriate,” he said.

“Dealing with a virus is scientific first. It’s not divine revelation. It is not apostolic tradition. The status quo of physically, psychologically, socially or spiritually destructive measures needs to be strongly challenged and every individual utilizing their God-given talents and expertise.”