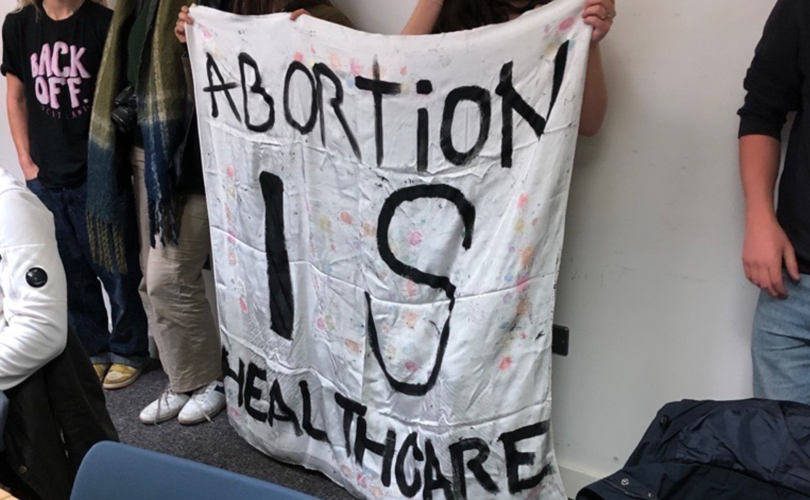 “Stop this talk right now,” shouted a North American woman through a megaphone. “We are disrupting this talk. We’re not letting you spread your harmful rhetoric against people with uteruses [sic]…. We are not allowing this to happen on our campus.”

Brainwashed, blue-haired leftist interrupts a classroom of pro-lifers… then declines conversation while wielding a bullhorn. pic.twitter.com/4rEjqO0t8j

Margaret Akers of the Society for the Protection of Unborn Children (SPUC) Scotland had been invited by the university’s Life Society to give a talk on campus at 7 PM, October 17. The title of Akers’ talk was “My body, my choice? The role pressure and coercion play in the decision to have an abortion.”

A small group of sympathetic listeners and a larger group of pro-abortion students holding banners gathered in a classroom and listened to Akers’ lecture for about 9 minutes before the megaphone-wielding woman and her sign-carrying companions burst into the room. By the time everyone was inside, the abortion supporters had lined two sides of the room, taken seats on a third, and were effectively blocking the room’s only exit.

Sophia Tait, the president of the Life Society, asked those who did not want to listen to Akers’ talk to leave and promised that those who listened would be able to take part in a conversation at the end.

She pointed out that the lecture was a “purely optional event,” but the spokeswoman told Tait that she didn’t think that “you guys deserve to have a platform here,” while suggesting that most of the people there “sympathize[d]” with her own view, and announced that the demonstrators were not “allowing [the Life Society] to continue the talk.”

By then, the members of the Life Society and their sympathizers were outnumbered 3:1.

After the interruption, the lecture never resumed. Instead, the protestors screamed questions and accusations at the SPUC speaker, accusing SPUC of organizing vigils outside an Edinburgh abortion clinic—which Akers denied—and demanding to know who funds the charitable organization.

Suddenly, a haggard American woman in overalls took the floor to give a speech about the emotional impact of pro-life sentiments on abortion-minded women.

“I had to have an abortion because I was coerced into not using contraceptives,” she said. “That kind of coercion is something that you are not bringing to the table and that you are refusing to speak about.”

However, Akers did not have much of a chance to talk about sexual coercion as the hostile crowd was determined not to let her speak. When a custodian appeared to ask if anyone was there who didn’t want to be there, the protestors’ spokeswoman said that she was not happy with “them” being in the classroom. Someone shouted that protesting the lecture was their “basic human right.” The custodian said that if everyone did not behave, he would get in touch with security, something he was reluctant to do. He asked Rory Lamb, the treasurer of the Life Society, if he was happy with what was “going on.”

“As long as our speaker is allowed to continue her presentation,” said Lamb.

“Are you all quite happy with that?” asked the custodian.

The protestors burst into laughter, but their good humor was short lived. When Tait announced that Akers would continue her talk, the spokeswoman shouted that “You don’t get a platform” and accused Akers—of whose talk she had heard nothing—of “spreading hatred and misinformation.”

One of the English pro-abortion demonstrators, at least, was willing to have a real “discussion … even though we might really differ in views.” (This demonstrator also supported the current time limits on abortion, saying that she did not favor aborting “babies that are … functional little babies.”)

Akers said that if the crowd would prefer that she cede the floor to a wider discussion, she was happy with that.  The “wider discussion” began with a speech by Hope Conway-Gebbie, the Edinburgh University Student Affairs (EUSA) Liberation Officer—and the only abortion advocate who identified herself or himself at the meeting.

By 8 PM, the planned end for the lecture, the meeting had permanently disintegrated into a series of speeches. The speakers were chosen by one of the pro-abortion demonstrators, who had volunteered to moderate. Life Society president Sophia Tait attempted to bring the meeting to a close but was reproved by the activists, who pointed out that the room was booked until 8:30. At that, Tait said that the crowd was welcome to stay. This generosity gave a male demonstrator the opportunity to attack Tait personally for having invited a speaker from SPUC.

The meeting finally ended after 8:30 with the return of the custodian, who ordered everyone out.

The coercive takeover of a lecture on coercion

“I wasn’t surprised that there was some sort of protest, given the abusive comments we had received on Instagram,” Tait told LifeSiteNews Tuesday morning. “But I was surprised by the number of people who showed up and the fact that the protest was clearly planned and coordinated.”

Despite anger of many of the protesters in the room, Tait did not share the LifeSiteNews reporter’s fear that they would become physically violent.

“The numbers were intimidating, but interacting with people as individuals, they were civil [and] respectful of personal space. For the most part they respected the boundaries needed for a coherent discussion — there was no chanting, interruptions were mostly — though not always — kept in check, and so forth. Obviously taking over an event in that way is aggressive in itself, but I didn’t feel physically threatened at any point. “

Tait agreed, however, that the takeover “felt coercive.”

“The talk we had planned and the speaker we had invited were completely shut down,” she acknowledged.

“They did succeed in de-platforming the event, even if to all appearances it continued for the allotted time. From the point that the second group arrived to shout us down, the protesters seemed to feel they were running the event, to the extent of harassing us for trying to end at the time we had originally scheduled.”

Margaret Akers of SPUC told LifeSiteNews Tuesday that, based on the nature of her work, she is always aware of the possibility of protests.

“Ahead of this event, there was a significant amount of vitriol from abortion supporters on social media,” she observed.

“I like to give protestors the benefit of the doubt and the opportunity to participate in a discussion,” she added.

“The initial group that had entered the lecture hall seemed willing to participate in this way. But the group that arrived later, with megaphone in hand, made it clear to me that my presentation was not going to be able to move forward without issue.”

By ceding the floor to a more general “discussion,” Akers hoped to “deescalate” the situation.

“I think one must always be aware that things can get out of hand,” she said.

“It is certainly intimidating to have a group of people march into the room while you’re presenting. I felt the best thing to do in that environment was to deescalate as best I could, for everyone’s sake. Emotions were high, and there were a lot of people present, and no security. So, I made the decision to take a step back from my presentation and open up for a wider discussion.”

She had hoped that the discussion could have been “more open and fruitful” instead of being “an opportunity for some pro-abortion students to air their grievances.”

“The pro-life students have as much of a right to hold and voice their opinion as any other student group and should not be shamed or targeted for doing so,” Akers continued.

“Universities should be environments for free and open exchange of ideas – and that includes topics on which people vehemently disagree. In the future, I would hope the university use a firmer hand to protect freedom of speech at on campus events.”

Tait told LifeSiteNews that the Life Society committee was discussing what to do to prevent hostile takeovers of their events in future.

“We will probably contact EUSA and see if they can help in any way, and we’ll also reach out to pro-life support organizations such as APS (Alliance of Pro-Life Students),” she said.

“The question becomes how to reach as many people as possible who are open to listening and to genuine discussion—and maintain the witness of our presence on campus—without drawing hostile groups that just want to shut us down.”

A group called Staff-Student Solidarity Network claimed partial responsibility for the disruption of the talk over Twitter, while falsely asserting that SPUC is a US-funded hate group and that abortion is a “human right.”

Tonight we disrupted an Anti-Choice Event by the pro-life society at the University of Edinburgh along with half a dozen other student groups.

A university shouldn’t be a place that allows hate groups like SPUC to spread misinformation.

Another group, calling itself Youth in Resistance, published to Twitter last night a video of the interruption from the protestors’ point of view. In its remarks, it too falsely stated that the British organization is a “US funded group.”

✊✊✊ Students Disrupt Anti-Choice Event at the University of Edinburgh

More info in thread & full video on our instagram pic.twitter.com/reuta2Jt98

LifeSiteNews attempted to contact Women’s Liberation Officer Hope Conway-Gebbie but had not received a response by deadline.