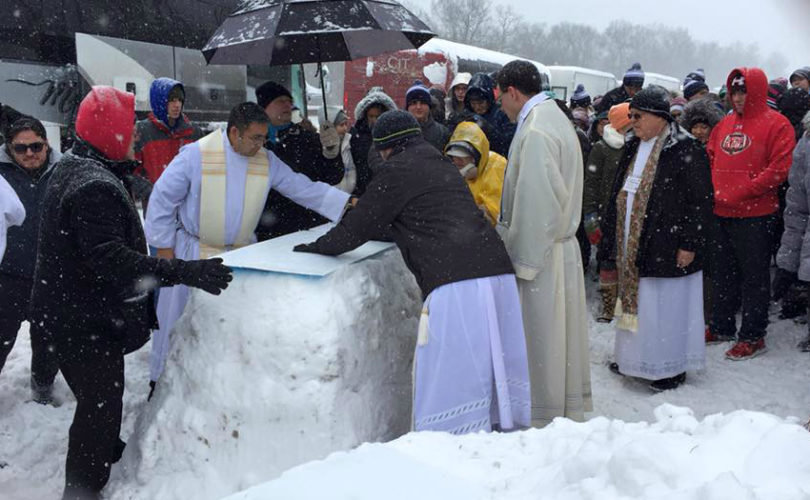 Note: To view the photos in the slideshow, click on the blue arrows in the main photo above.

Jan. 23, 2015 (LifeSiteNews) – Reports are coming in that dozens of buses of March for Life participants are still stranded (as of Saturday evening) on the Pennsylvania Turnpike, after a small accident caused a huge back up of traffic Friday evening. The massive dumping of snow then left many of the buses unable to carry on.

LifeSite spoke with several of the groups that are stranded, and spirits are reportedly high. One group of Catholic students from Omaha and Minneapolis- St. Paul were suggested that all the pilgrims celebrate Mass.

Without a proper altar available, they took things into their own hands and made an altar of snow. The Missionary Benedict Sisters from Norfolk, Nebraska posted that, “Word spread around, and on one bus, the priest had around 300 hosts, and offered to celebrate the mass. Well word travelled around fast and soon we had like 6 priests and 500 people there. God is good!!!”

Check out the video below.

Mass outside. In the blizzard once in a lifetime experience.

“We have now been stuck over 15 hours in the snow because of this so called#jonasblizzard but that isn't ruining our spirits!” said Iowans for LIFE Associate Director Mary Granzow in a Facebook post Saturday morning. “We are still on a pilgrimage for life including Mass outside in the snow, snowball fights, and making sure those driving by know that every life matters!”

The Mass was said by Fr. Patrick Behm and a number of other priests.

The Cheboygan bus just got freed!  There are still four miles of busses waiting, though. They were first stopped around 10:30 on Friday night. There are over 2200 Marchers stuck on just our little section of the turnpike. I counted 24 buses among the dozens and dozens of semis who are still stuck. I walked about a half mile up the turnpike and talked to every charter bus on the road.

I wrote down who the buses were and how many other buses from their group were also stuck.
These are the buses I found out about from my half mile walk:
Cascade Iowa two buses
One bus from Dyersville
Two from Dubuque
Three buses from Minnesota
One from South Dakota
One from North Dakota
One from Indiana
5 from north western Pennsylvania
One from Cleveland
Another one from Toledo
5 from the St Louis area
5/7 stuck from Omaha.
6 more from Lincoln
Two more from Iowans for Life.
People on our bus also have information from friends from these other stuck buses:
One more from Michigan- Cheboygan Right to Life.
Seven Steubenville buses.