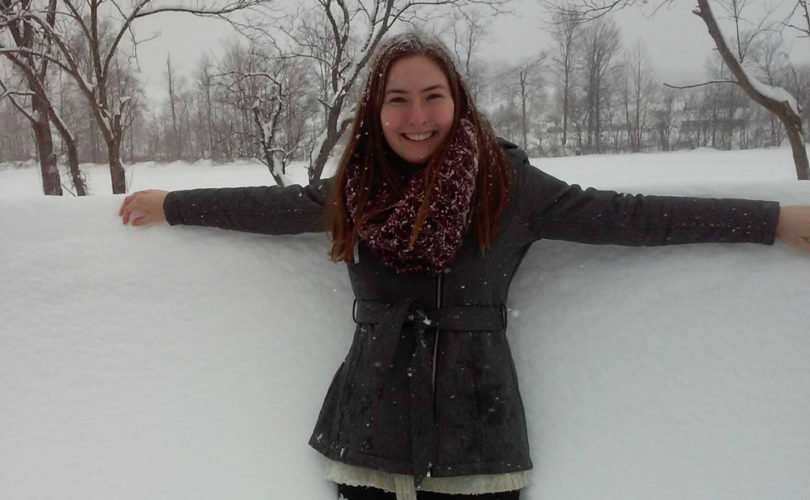 Andrea Moury is a sophomore who is active in the Franciscan University of Steubenville's Students for Life club.

WASHINGTON, D.C., January 25, 2016 (LifeSiteNews) – They spent five hours driving to Washington and 45 hours getting back home. Yet those who were stranded say they would gladly do it again and are happy to share in the sufferings of the unborn.

After attending the 2016 March for Life, busloads of pro-life young people found themselves trapped on the Pennsylvania Turnpike.

One of those was Andrea Moury, a sophomore active in the Franciscan University of Steubenville's Students for Life club.

She and her fellow Franciscan students rode seven buses into the nation's capital for the annual pro-life event. Then they left D.C. on Friday afternoon to make drive back to Ohio.

Instead, their return trip took 45 hours, much of it snowbound on the Pennsylvania Turnpike without adequate food or water.

“There were many inconveniences we endured during the time we spent waiting to be rescued,” Moury told LifeSiteNews.

“We had to divide a cold pizza by 40. We had to sleep two nights on the bus,” she said. “We did not have running water.”

“However, those little sufferings were nothing compared to the tremendous sufferings of the unborn who undergo the pains of abortion,” Moury told LifeSiteNews. “That is why we attend the March for Life, and why we will continue to be voices for the innocent babies!”

The National Guard delivered food and supplies to hundreds of stranded motorists before reopening the roadway on Sunday.

Moury's story dovetails with those of thousands of right to life advocates who found themselves feeling strangely grateful to get snowed in after the 43rd annual March for Life.