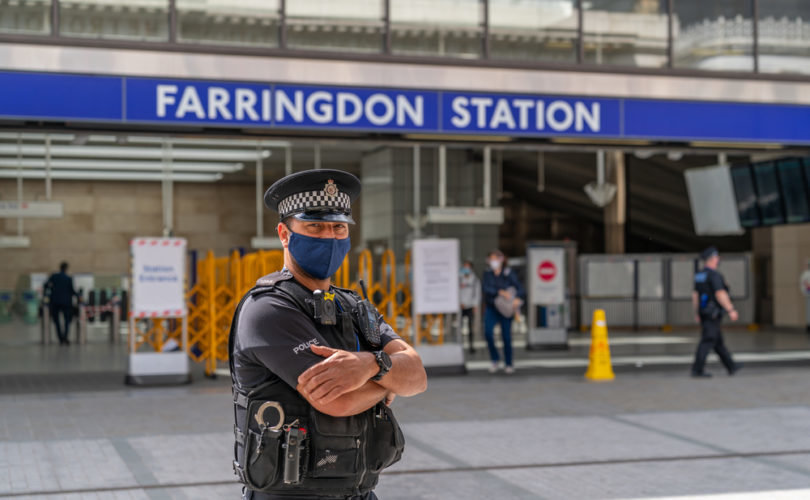 LONDON, U.K., July 1, 2021 (Christian Concern) – A judge has ruled that it was right for the police to arrest and fine a Christian volunteer for breaking COVID-19 regulations by street preaching on Easter Sunday.

Andrew Sathiyavan, 46, who is being supported by the Christian Legal Centre, was arrested on Sutton High Street in south London on Easter Sunday 2020, after being told by the police that preaching the gospel was “not allowed.”

After contesting the fine at the City of London magistrates court, Deputy District Judge Minhas ruled that Sathiyavan could have done his street preaching and ministry online and that therefore he had no valid reason for being out on the streets.

Mr. Sathiyavan is a full-time voluntary worker for Gospel Light Ministries and regularly preaches across the U.K. His voluntary work involves preaching, supporting the homeless and people suffering from drug and alcohol addictions.

Mr. Sathiyavan has now lodged an appeal and will be launching legal action against the police following a similar case in November 2020 which saw him fined, arrested and even strip searched for preaching in Solihull.

The £400 fine issued to him in this incident was subsequently dropped after the Crown Prosecution Service (CPS) believed there was insufficient evidence against Mr. Sathiyavan to secure a conviction.

Judge Minhas’ ruling comes despite calls for the 85,000 covid fines issued during the pandemic to be reviewed and even scrapped.

The case highlights serious inconsistencies in the approach of the police to the regulations with some protestors acting with impunity throughout the pandemic and without police intervention.

Believing he was a key religious worker under the government’s COVID guidelines, on Easter Sunday, 12 April 2020, Mr. Sathiyavan was preaching on Sutton High Street when he was approached by three police officers.

Video footage revealed an officer initially suggesting to Sathiyavan that they had been called to the scene because the amplification he was using to preach was causing a disturbance – not for breaching COVID regulations.

Mr. Sathiyavan asked an officer if he was “breaking the law by preaching the gospel, sir?” The officer responded: “We are not saying you are breaking the law, but it is causing anti-social behaviour.”

A third officer, P.C. Routledge, then told Mr. Sathiyavan that he was “breaching COVID laws because you are here without a purpose. You are not exercising, you are not going to work, so you can get a fine.”

“Under COVID laws you are allowed to be outside if you are going to the shops, exercising or going to work. You are doing neither; you are preaching and that is unacceptable.”

Mr. Sathiyavan responded: “So you are arresting me for preaching. “The officer says: “No, no one is going to arrest you.”

One officer then pointed to two people on the high street whom he said were allowed to be there because they worked for takeaway food service, Deliveroo. “They are delivering food and are providing a service,” he said.

As Sathiyavan continued to ask questions, one officer took a step towards him, leant in and directed him to “Stop now. There is a viral pandemic which means you need to be at home, not on a high street preaching the Word of God.”

— Article continues below Petition —
PETITION: Support 2-year-old's right to remain on life support in UK
Show Petition Text
6473 have signed the petition.
Let's get to 7500!
Thank you for signing this petition!
Add your signature:
Show Petition Text

“Does it [COVID regs] say I am not allowed to preach the gospel,” Mr. Sathiyavan asks, and in unison the officers all reply “yes.”

P.C. Routledge then lost his patience, and said “give me your name and number, you’re getting a fine, I’m fed up with this.”

Mr. Sathiyavan was then taken to custody and held for four hours and then released.

Conflict between freedom of religion and police

As part of his expert report, Dr. Parsons commented that “arrests of street preachers were until recently extremely rare.”

“There is therefore a potentially significant conflict between this aspect of freedom of religion both in terms of how it has been developed in British constitutional history and the interpretation of current Coronavirus regulations by the Metropolitan Police.”

‘Gospel preaching is my work’

Mr. Sathiyavan said: “Gospel preaching is my work. I tell people about the Good News of Jesus Christ, which preachers have done for centuries in this country. I seek to reach people living in fear and without hope.

“In this instance the police escalated the situation for no reason. I was treated like a criminal.

“In a separate incident when I was preaching in Birmingham, I was followed, harassed, arrested and then strip searched in custody by the police.

“I have no alternative but to appeal and pursue legal action against the police. I don’t want Christians and preachers to be treated as I have been.”

“This is a man who spends his life reaching and serving the poorest and most marginalised in our society – the people who fall through the cracks and are left behind by the system. This man has a heart for the poorest in our society and for trying to reach out to them found himself locked up in a cell and strip searched. The police presence on Sutton High Street caused a greater risk to public health than if they had allowed Andrew to continue preaching. The inconsistencies in the policing on these issues during the pandemic has been stark. Christian preachers seem to be easy targets and other groups favoured.”

“We will stand with Andrew as he now appeals and pursues legal action,” added Williams.