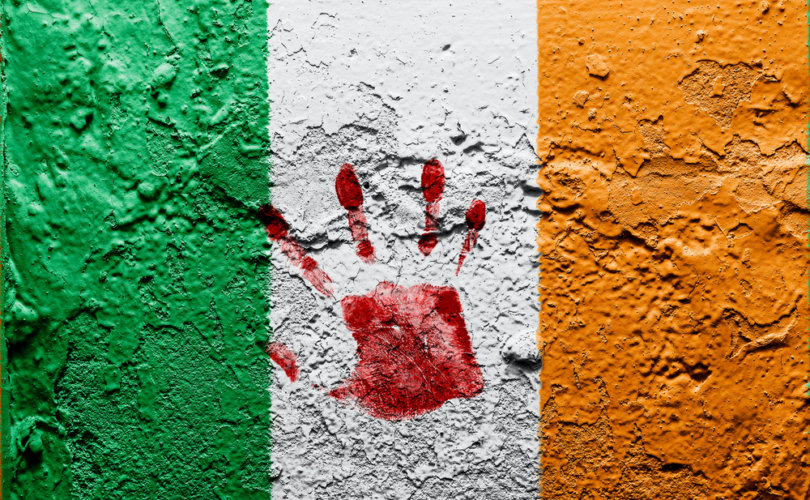 LIMERICK, Ireland (LifeSiteNews) – A group of men praying the rosary on the streets of Limerick City in Ireland were subject to sustained abuse both during and after their event last Saturday, as pro-abortion activists vented their fury at the men’s unwillingness to be intimidated out of the area.

The prayer event had been organized weeks before the tragic murder of 23-year-old teacher Ashling Murphy on 12 January, which members of the pro-abortion Reproductive Rights, Oppression, Sexism and Austerity (ROSA) group subsequently chose to protest at the same time and location as the rosary on Saturday, January 15.

What followed was a cacophony of profanities and abuse from the abortion activists towards the praying men, with Gardaí (police) warning at least one of the agitators to desist.

Another member of the ROSA protest stormed past the kneeling leader of the rosary and shouted “F— you!”

Numerous anti-Catholic posts followed online, with one by Belfast journalist Mick Philpott saying he would  “kick them and their rosary beads the full length of the street” and another, since removed, by an Irish expat on the Isle of Wight saying he would “string them up by their beads…”

The specter of politicians further demonizing the men who prayed the rosary, falsely accusing them of “misogyny” and of raising “the sound of the PA system every-time anyone spoke” at the ROSA event, only served to fuel the online mob that followed.

Organizers of the Irish Men’s Rosary say the “controversy is being unfairly seized upon for other ends” and that “at no time” were they asked to turn down their loudspeaker volume or move elsewhere.

“The rosary organizers had no idea that another group was going to arrive…(we) had set up 30 minutes before Rosa members arrived,” the statement reads.

“The Bedford Row rosary event was organized and advertised before Ashling Murphy’s tragic death. A number of Masses are being offered for her soul and her grieving family,” organizers added.

The men’s public rosary of reparation has grown in popularity throughout Ireland in recent months. It started in Northern Ireland with Patrick McCrystal and Owen Gallagher of Human Life International promoting the First Five Saturday devotions as called for by Our Lady of Fatima.

Explaining the rationale behind the initiative, County Tyrone native Patrick McCrystal told men in Belfast last December how powerful St. Louis de Montfort considered public prayer to be, and that 2 Chronicles 7:14 demonstrates the importance of reparation.

“St. Louis de Montfort told us that public prayer is more powerful than private prayer, and Scripture tells us that if we repent, God will heal our land,” McCrystal said in the busy Belfast city center.

“Who here wants Ireland healed? Hands up!” he asked the crowd.

“Well, you couldn’t be in a better place, lads, because Scripture says… ’if my people…who are called by my name, will humble themselves and pray and seek my Face and turn from their wicked ways, then I will hear from heaven, I will forgive their sins, and heal their land.’”

The men make reparation for some of the specific sins affecting society, not least abortion, while McCrystal also points to draconian COVID restrictions imposed by governments as signs of “growing tyranny”.

McCrystal and Gallagher were inspired by the example of men praying in Poland on the Feast Day of St. Joseph this year.

The next public rosaries take place on Saturday 5 February in Omagh, Cork, and Athlone.