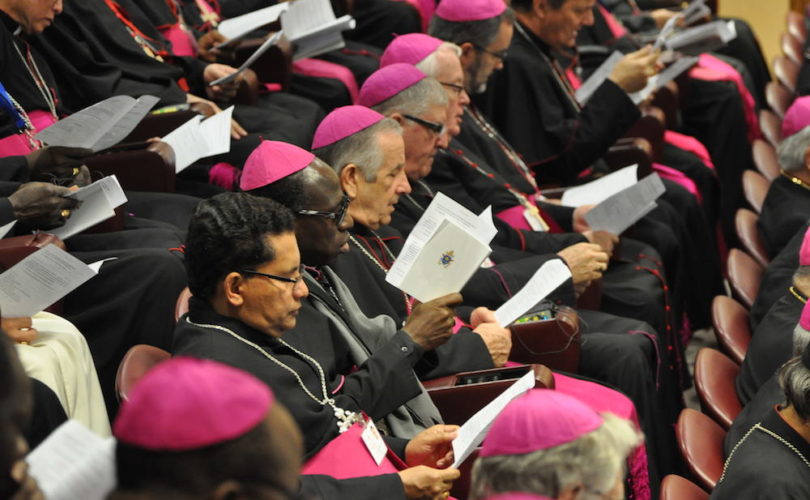 ROME, October 23, 2015 (LifeSiteNews) — The battle for the identity of the Catholic Church continued at the Vatican’s Ordinary Synod on the Family as the concluding week progressed toward final consideration of the Synod’s final report.

Onslaughts to the Church’s teaching in the areas of marriage and human sexuality have been ongoing since last year’s session of the Synod, jeopardizing the Church’s very identity as one, holy and catholic.

At the forefront is the threat of abandonment of Church morals through acceptance of homosexuality, fornication and adultery in practice – in particular by opening up the reception of Holy Communion to people in such objective states of sin – and through the adoption of more “inclusive,” and ambiguous, language.

As it has become obvious at the Synod this year and last that a majority of fathers would not support such proposals, advocates have shifted to calls for allowing local bishops’ conferences to make their own decisions on these issues.

Nevertheless, orthodox bishops have fought to hold the line on Church teaching.

The content of the final Synod document remains to be seen, however, and concerns over its drafting linger.

Bombay Cardinal Oswald Gracias, who said in an October 19 interview with the homosexual advocacy group New Ways Ministry that the Church should be open to people identifying as homosexual, is one of ten bishops on the final document drafting committee. New Ways was clearly happy with the cardinal’s responses to their questions.

His comments at a Thursday press briefing fueled fears in both the areas of Communion for the divorced and remarried, and what’s been called Church decentralization.

The Church is one universal body, Cardinal Gracias said, but there are diverse circumstances in that body. He went on to state that the Church had to deal concretely with situations, and therefore he thought it would be appropriate for episcopal conferences to study behaviors that occur in their context.

The cardinal also said that a way forward for divorced and civilly re-married Catholics should be explored further. “To be honest, we don’t have a solution,” Cardinal Gracias ultimately said.

But despite this not receiving support from the small groups, he stated that it could be mentioned in the final document scheduled for presentation to the Holy Father Saturday.

Arguably causing the greatest concern was Cardinal Gracias’ attempt to suggest the question was open by appealing to paragraph 84 of Pope Saint John Paul II’s 1980 document Familiaris Consortio, even though the late Holy Father said clearly in it that divorced and civilly re-married Catholics could not be admitted to the Eucharist.

Cardinal Gracias told the press conference that while a number of issues were similar as at the time of Familiaris Consortio, circumstances have changed.

He said Familiaris Consortio holds that individual cases should be looked at carefully, and in that particular paragraph Pope St. John Paul II had said all people should not be placed in the same category.

The cardinal advocated further study of scripture, moral theology, doctrine and tradition, so that deepened understanding could lead to “a way forward.”

However, in Familiaris Consortio, the late pope stated in part:

They are unable to be admitted thereto from the fact that their state and condition of life objectively contradict that union of love between Christ and the Church which is signified and effected by the Eucharist. Besides this, there is another special pastoral reason: if these people were admitted to the Eucharist, the faithful would be led into error and confusion regarding the Church's teaching about the indissolubility of marriage.

While many bishops continue to dismiss claims of division among the Synod fathers, individual dust-ups between more orthodox bishops and their liberal colleagues have intermittently emerged throughout.

The most recent occurred on Wednesday involving German Cardinal Reinhard Marx, president of the German bishops’ conference, and Australian Cardinal George Pell, prefect of the Vatican’s Secretariat for the Economy.

Earlier this year, Cardinal Marx said German bishops would go their own way in determining whether to allow Communion for individuals in “irregular” sexual unions, stating, “We are not a subsidiary of Rome. The Synod cannot prescribe in detail what we should do in Germany.” He also criticized “traditional” young people for wanting “to be clear in their positions,” saying this is a path to “terrorism.”

Cardinal Pell, widely regarded as a leader in the camp of orthodox bishops, does not support the Kasper proposal. “You can’t separate practice from moral teaching,” he stated late last week in a Wall Street Journal interview. “Christ’s teaching on adultery and second marriages is very clear.”

The German small group had favored the Kasper proposal, but the group went one step further in its report, incorporating criticism of “dismay and sadness” directed toward unnamed Synod fathers who had “violated the spirit of the Synod,” and caused division.

After bringing it up at the Wednesday press conference, Cardinal Marx proceeded to “out” Australian Cardinal Pell for statements Cardinal Pell made in an interview with France’s Le Figaro magazine that Cardinal Marx said portrayed the Synod conflict as a battle between supporters of his fellow German bishop Cardinal Walter Kasper and Pope Emeritus Benedict XVI.

“We didn’t want to make a discussion of names,” Cardinal Marx stated to the press conference. “But we were negatively touched by Cardinal Pell’s interview.”

“It was not useful for the Synod to talk this way. I think Cardinal Kasper was very touched (negatively) by this,” he said. “In the synod, we are not in a battle. We are not Ratzinger versus Kasper. That is not okay.”

Also in the press briefing Cardinal Marx continually referred to marriage as a “dream,” or an ideal people have, versus a commitment and the Sacrament Christ established it to be. He also spoke more than once about the Church “staying with” people when their dream fails. Staying with people, Cardinal Marx said, “Doesn’t destroy indissolubility or discourage marriage.”

He referenced as well a “way of reconciliation,” in the German group’s document, a term often used to reference making Communion available for those in regular unions.

Cardinal Marx also said doctrine and theology are not the same thing, and that doctrine is  “living tradition.” “We don’t change the truth, we are owned by the truth,” he stated. “We don’t own the truth.”

“I hope this Synod will be a Synod of open doors and not of closed doors,” the cardinal said.

The bishops heard the final draft report of the Synod’s working document Thursday afternoon before having the evening to review it and then assembling again Friday morning to hear interventions on it.

The revised final report will be read to them Saturday morning, to then be voted on Saturday afternoon paragraph by paragraph, with two-thirds comprising an approving majority.

Pope Francis can take the final document into consideration or not, before promulgating an apostolic exhortation at a time of his choosing.