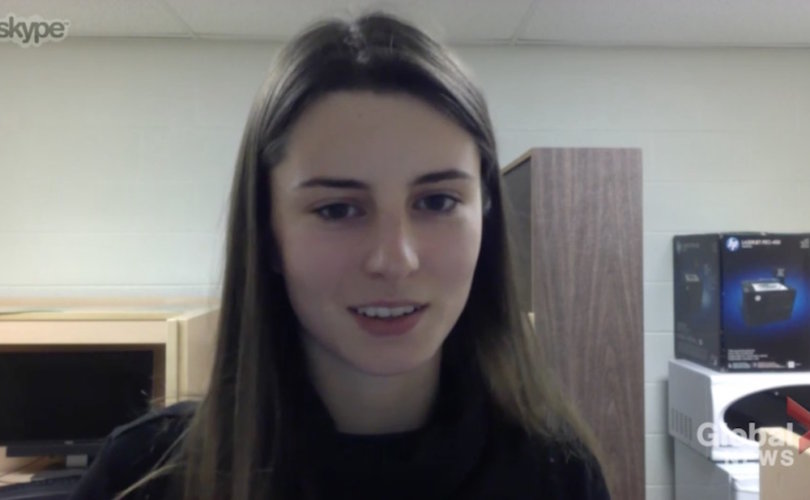 WATERLOO, Ontario, November 23, 2017 (LifeSiteNews) — An Ontario grad student who came under university investigation for showing a video clip of a gender ideology critic says she’s glad the university apologized, but it’s not enough.

Last week, Wilfrid Laurier University student Lindsay Shepherd published a secret recording of faculty berating her for not denouncing well-known University of Toronto professor Jordan Peterson when she showed a clip of while serving as a teaching assistant.

The university apologized after widespread criticism, but Shepherd told Global News on Wednesday that the administration hasn’t actually taken any steps to change the academic climate to facilitate debate of contentious issues.

“It’s not like they’ve taken a stance on anything, they’re just like embarrassed and they had to do something about it,” she said.

And her fellow grad students treated her like a “scary monster” in her first class that morning, said Shepherd.

The professor said at the beginning of class “this is a difficult situation but we’re just going to move on,” but there was “no mention of my name, no mention of the issues at stake,” Shepherd added.

“Come on, people…don’t you realize, like, can’t we talk about this?”

Rambukkana called the meeting after students complained Shepherd showed her communications class a clip of an interview with Peterson on TVO’s The Agenda.

The three faculty members reduced Shepherd to tears in the meeting, castigating her for creating a “toxic” and “unsafe learning environment,” and for transgressing Bill C-16 by not decrying Peterson’s “discriminatory” views.

Rambukkana was “self-reflective” in his letter, and his apology acknowledged “the things that people were pointing out to him that were wrong,” Shepherd said.

But at the same time, “in his letter, I don’t know if he realizes he is pushing such a strong agenda,” she said.

Shepherd, who remains Rambukkana’s TA, says she’s not looking for the professor to be fired.

“I was never out for blood,” she said earlier in the video.

“I think that’s kind of what the alt-left people do, they always call for resignations,” she said. “I don’t want to take that kind of extremist stance.”

She reserved her strongest criticism for the university.

“Let’s acknowledge that [apologizing] was their only option” Shepherd said.

After the story took off, alumni posted comments that they were pulling donations to the university, and parents likewise commented “not sending my kid there,” Shepherd observed.

“They did some damage control…but it’s not like they made a long-term commitment like the University of Chicago did.”

That university codified a guarantee of academic free speech and expression in its 2014 Chicago Principles, which have since been adopted by other American universities, including Princeton.

“It’s pretty sad that to be taken seriously as, you know, a grad student I had to secretly covertly record these people,” Shepherd said, adding that whistleblowing “comes with a risk.”

“There’s a lot of political correctness that has infiltrated the workplace,” she said. “Now if you Google me you see, like, I don’t play the game.”

Moreover, prospective employers will see “I’m someone who secretly recorded my superiors,” she said. “It’s going to be attached to my name forever.”

But Shepherd avowed the risk was “worth it.”

“This is about just making people aware of the reality of Canadian universities,” she said.

That makes it all the more troubling that her fellow grad students said “nothing” to this morning.

“If someone in my class, sitting across the desk from me was in national news for an issue that affected my university directly, I would ask them, like hey, what’s going on,” she said.

“By treating it like it’s something we can’t talk about, and by treating me like I’m someone you can’t talk to, like, what is with that?”