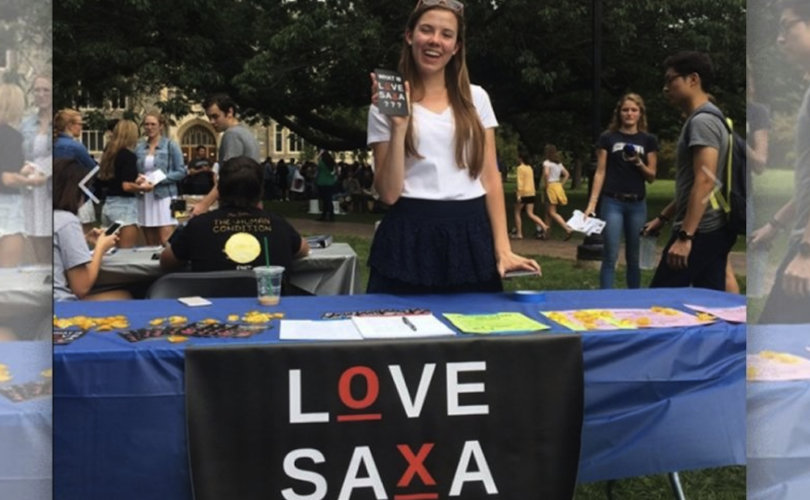 WASHINGTON, D.C., November 8, 2017 (LifeSiteNews) – The student group at Georgetown University that defends Catholic teaching on marriage and sexuality will be allowed to continue to exist after a panel voted 8-4 not to sanction it.

An administrator still has the power to reject the panel’s recommendation that the group not be sanctioned by the Jesuit university for its Catholic beliefs on marriage. The administrator, Amanda Carlton, has not indicated how she will rule.

The Love Saxa club promotes healthy relationships and sexual integrity. It encourages students to reject the hookup culture, pornography, and the notion that marriage is anything but the permanent union of one man and one woman.

Love Saxa is an affiliate of the Love and Fidelity Network, a national group that works with pro-marriage clubs on college campuses.

Love Saxa then had to defend itself during a hearing that went past midnight on November 2 and into the morning of November 3. Its first hearing was October 30. That hearing lasted several hours, but no verdict was reached.

“We're happy to announce that free speech and toleration have won the day,” said a Love Saxa statement on its Facebook page, posted at 1:02 a.m. November 3.

“We're grateful for all of those who have supported us throughout this process,” the Love Saxa statement said. “We look forward to engaging in productive dialogue with those who disagree with us on issues of sexuality, marriage, and the family.”

“It’s very heartening when students set the example and make mature decisions,” Patrick Reily, president of the Cardinal Newman Society, told LifeSiteNews. “I wonder, would Georgetown’s faculty and leaders have had the same courage and conviction about Georgetown’s Catholic mission?”

“Sadly, that’s an open question, given the open hostility toward Catholic teaching that we have seen at Georgetown over the years,” he noted.

The students who brought forth the original complaint are appealing the panel vote.

Alain Oliver, the executive director of the Love and Fidelity Network, wrote in an email to supporters that he was grateful the pro-marriage group was allowed to keep its freedom of speech.

The Georgetown student panel decided that university policy “permits the belief in conjugal marriage and the binary fact that humans exist as ‘men’ and ‘women,’ and that these ideas can be held, expressed, discussed, and debated in private and public on campus,” Oliver wrote.

SAC’s board members each gave a reason for their vote. Those who voted in favor of Love Saxa explained that Love Saxa’s activities and the speakers they brought to campus were protected under free speech. Love Saxa’s events largely center on the harmful effects of pornography, the U.S.’s rising divorce rate, and the merits of chastity.

But those who voted against Love Saxa said its constitution and an article its president, Amelia Irvine, wrote for the The Hoya “demonstrate an intolerant purpose because they support the denial of LGBTQ people’s right to marry others of same sex.”

The offending article was called Confessions of a College Virgin. She outlined why she is choosing not to have sex with her boyfriend and explained Love Saxa is a space for students to recover from the hookup culture.

“Some members also said they did not think the speakers which Love Saxa had invited were admissible, saying free speech does not protect intolerant speech,” the Georgetown Voice reported.

On October 27, The Hoya published an article titled Behind the Curtain: Students in Sex Work. It described Georgetown students engaging in prostitution.

The student it profiled prefers the gender pronoun “they” and appears to be a male who thinks he is female, based on the descriptions.

“The extra income furnished their ability to purchase makeup and clothes that represented their identity,” the article explained.

“Eric/a” began by using SeekingArrangement.com, a website that facilitates “sugaring.”

This is “a practice which relies on gifts or allowances from clients in exchange for sex.”

“But after finding the payoff of sugaring to be too meager and at times uneven, Eric/a switched to escorting, which relies strictly on monetary transactions for sex,” The Hoya reported.

“Eric/a” said he “knows of similar arrangements among their peers who have taken up sugaring to offset tuition costs.”

Georgetown is widely regarded as one of the most liberal Catholic universities in America. It allowed Cecile Richards, president of Planned Parenthood, to speak on campus in 2016 at an event held by its Lecture Fund.