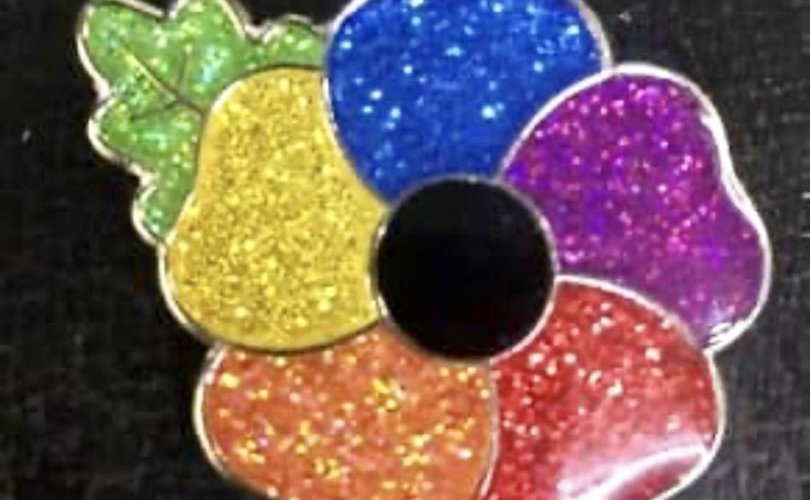 BLACK RIVER, Manitoba, November 7, 2019 (LifeSiteNews) — A 17-year-old Canadian high school student is sticking to her story that a Manitoba school suspended her for “hate speech” after she posted objections to wearing a rainbow-colored poppy.

The Interlake School Division will neither confirm nor deny reports that the Stonewall Collegiate student has been suspended until after Remembrance Day.

“In the interests of maintaining confidentiality, we would not publicly comment on any student matter whatsoever,” board chair Alan Campbell told LifeSiteNews in a phone call.

“But what I can tell you is that at no point did a staff member of Stonewall Collegiate or Interlake School Division direct, mandate or suggest that any student should have to wear a rainbow poppy,” Campbell said.

However, the student, identified only as Natalie, provided a statement Thursday to the Post Millennial, which broke the story Wednesday.

“It all started when teachers, counselors, and some students said we should wear the rainbow poppy … ” Natalie said, adding that she disagreed. “I typed up papers on a computer, printed them off, and taped them up in the halls.”

According to a photo in the Post Millennial, the poster said:

Never seen something so disrespectful in all my days. What does LGBTQ have to do with the war? Red represents Blood, Black represents widows and loved ones, green represents land the blood was spilled on. NEVER change the poppy.

Way to un-do centuries of blood sweat and tears all because you needed to do the dishes.

Keep it in your pants nobody wants or needs to see it.

You’ve got a whole month dedicated to the LGBTQ community, but the people who legitimately made a difference and died so that we could live decent lives get one day. You don’t need a poppy, you just clearly want attention. One day to celebrate the real hero’s how about we don’t make it about your sexuality for once?

If you didn’t make such a big deal about it and force people to make it a part of their lives it would be no problem.

“As I was putting them up, teachers were taking them down. I watched as they took them to the office and gave them to the secretary,” Natalie told the Post Millennial.

Natalie said she then went to class but was soon called to the office and confronted by Principal Jason Cassils and Vice Principal Bryce Baldwin, who, she alleges, began yelling at her to the point where she became afraid and was on the verge of tears.

“They accused me of hate speech and endangering the physical safety of the group of individuals (LGBT students),” Natalie said.

“They asked me what I was thinking, and I told them everything … I said I was just voicing my beliefs and morals,” she told the Post Millennial.

“I got to the point of almost crying, but I didn’t. I had to be the voice for all those families who were greatly disrespected and offended.”

Natalie also alleged that when she tried to record the conversation, the administrators confiscated her phone and suspended her until after Remembrance Day.

“So I asked why? Why am I being suspended and punished for expressing my feelings? And they said everybody is entitled to their own beliefs, opinions, and way of life. So I asked, why am I not?”

Natalie said the school administrators notified her parents after they gave the suspension order.

Her father told the Post Millennial he saw school staff return Natalie’s phone to her when he came to pick her up, and that she cannot return to school until Tuesday.

He said the school administrators stated the reason for suspension was “hate speech,” not a refusal to wear the rainbow poppy.

The Interlake School District issued a statement Thursday morning: “In light of misinformation which has been widely spread on social media, we will share that at no point did any staff member of Stonewall Collegiate or Interlake School Division direct, nor mandate, any student to wear a ‘rainbow poppy.’”

The story erupted on social media and was reported in the Post Millennial after Cyara Bird of the Black River First Nation, a former Conservative Party candidate for Churchill-Keewatinook Aski riding of northern Manitoba, tweeted Wednesday:

My 17 year old cousin was suspended today… want to know why? Her choir teacher was demanding that the choir wear rainbow poppies during their performance in the Remembrance Day ceremony. She and another student rejected that idea, and both were suspended for “hate speech.”

“There was no forcing of wearing a multicolor poppy it was a strong suggestion that Natalie was strongly against and when she put her feeling on paper she was suspended for hate speech,” tweeted Bird.

Bird also tweeted that the school administrators told her cousin not to go public:

I should add that the school screamed at her to stay quiet about it. This is a message sent to me from my uncle, my cousin’s father. pic.twitter.com/c1EfLfBwET

“The pride we have because of our grandfather fighting in World War II is strong,” Bird told the Post Millennial. “We all wear poppies. (Natalie) was not opposing wearing one — she just did not want to wear one she felt was disrespectful to the veterans.”

Bird tweeted that the traditional red poppy is truly inclusive.

Let me be clear. The message I am sending with this tweet is, the red poppy stands for EVERYONE who made the ultimate sacrifice for this country, whether they were white, indigenous, black, or any other nationality, and whether they were straight or apart of the LGBTQ+ community.

Bird’s Twitter account is replete with outrage at the suspension and suggestions that her cousin sue the school board.