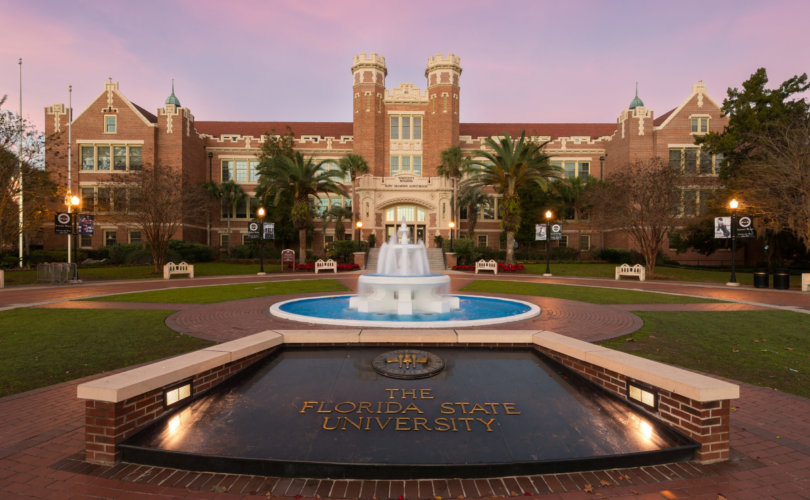 July 1, 2020 (LifeSiteNews) — A Florida State University senior is taking legal action after being ousted as student senate president when his comments on a private online chat regarding Catholic teaching on abortion and transgenderism and his statement that Catholics should not to support Black Lives Matter were leaked publicly.

Jack Denton told Catholic News Agency that Florida State’s student senate voted him out June 5 for “simply stating Catholic doctrine in a private group chat” about the positions of BlackLivesMatter.com, Reclaim the Block, and the American Civil Liberties Union (ACLU).

Denton is now being advised by the Alliance Defending Freedom (ADF) and is appealing to the university’s supreme court to get his job back on the grounds that his removal violated the university’s nondiscrimination policy, Student Government Association (SGV) policy, and the First Amendment, according to ADF spokesperson Ellie Wittman.

In a curious twist, several days after the student senate removed Denton, it voted to allow his successor, Ahmad Daraldik, to remain as president despite accusations that Daraldik formerly made anti-Semitic remarks on social media, the College Fix reported.

The College Fix reported that it asked FSU media relations and Student Affairs, which oversees the SGA, “why they have not intervened in a situation that could get the university sued for viewpoint discrimination, based on the disparate treatment of Denton and Daraldik,” but received no reply.

Denton made the remarks that led to his removal on a private text messaging forum for the Catholic Student Union during a discussion of the May 27 shooting of Tony McDade, a 38-year-old black woman who identified as a transgender man, by Tallahassee Police, CNA reported.

When one member suggested certain groups that students could financially support for racial justice, Denton responded that “everyone should be aware that BlackLivesMatter.com, Reclaim the Block, and the ACLU all advocate for things that are explicitly anti-Catholic.”

He explained in subsequent texts that “BlackLivesMatter.com fosters ‘a queer-affirming network’ and defends transgenderism,” and the ACLU “defends laws protecting abortion facilities and sued states that restrict access to abortion.”

Reclaim the Block “claims less police will make our communities safer and advocates for cutting PD’s budgets. This is a little less explicit, but I think it’s contrary to the Church’s teaching on the common good,” Denton wrote.

“As a devout Catholic and a college student, I felt that it was my responsibility to point out this discrepancy, to make sure that my fellow Catholics knew what they were partaking in,” he told CNA.

When it appeared that his remarks had upset some participants, Denton messaged that he didn’t “mean to anger anyone” but that he had a duty to speak up.

“If I stay silent while my brothers and sisters may be supporting an organization that promotes grave evils, I have sinned through my silence. I love you all, and I want us all to be aware of the truth,” he wrote.

According to the College Fix, a “queer” member of the group then sent screenshots of Denton’s texts to the student senate without his permission, sparking calls for his removal.

A June 3 statement from the FSU College Democrats said Denton’s messages “demonstrate a clear lack of respect for our Black and LGBTQ+ students at FSU.”

An June 4 op-ed in student-run magazine The Spire contended Denton was “unfit” to be president and was “attempting to use his religious identification as a cover for bigotry and cannot be let off the hook,” and a change.org petition demanded he be removed for alleged “transphobic and racist remarks.”

The FSU chapters of Amnesty International and Pride Student Union also called for his resignation.

A student senate motion to bring up a vote of no-confidence in Denton failed on June 3 but passed on June 5, CNA reported.

Denton described his removal to CNA as “ludicrous” and “blatantly unconstitutional” discrimination, but said his greatest concern was that the student senate gave in to the “mob.”

“It was quite scary to witness how this mob could influence all these senators in two days to just switch their vote and remove me as president, for being Catholic,” he said.

“I’m concerned for the future of students who hold religious views on college campuses, specifically students who are Catholic, devout Catholics,” Denton told CNA. “This is clearly setting a bad precedent.”

Meanwhile, the change.org petition asking for Daraldik’s resignation has reached 9,887 signatures to date. The  College Fix reported Friday that the senate has not announced any plans to re-vote on the senate president position.