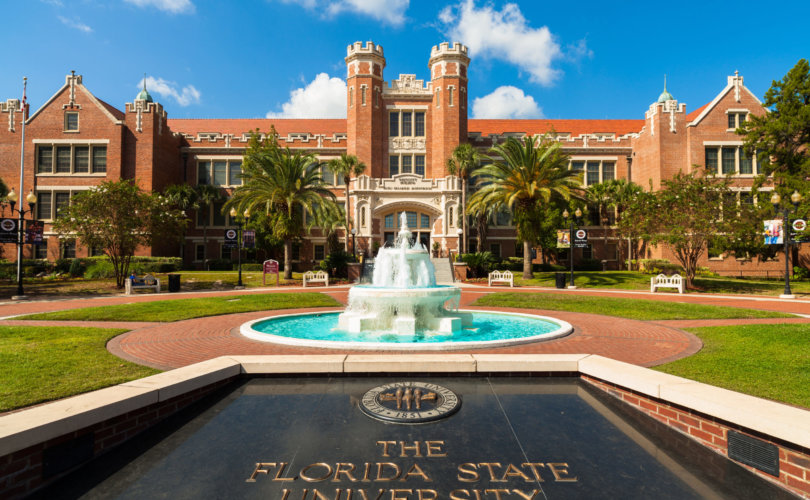 TALLAHASSEE, Florida, September 2, 2020 (LifeSiteNews) — A Florida State University senior is suing several officials at the university and in its student government for their alleged unconstitutional “retaliation” against his Catholic beliefs.

Jack Denton, 21, was ousted as president of FSU’s Student Senate in June after his private comments defending Catholic teaching on abortion and transgenderism and stating that Catholics should not to support Black Lives Matter were leaked.

ADF announced Tuesday that the university had not responded to its July 22 letter and that it filed a lawsuit on August 31.

He is now going ahead with legal action because “students and administrators have repeatedly failed to respect Jack’s constitutionally protected freedoms.”

Denton was targeted in June after a “queer” participant in a FSU Catholic Student Union’s private forum sent screenshots to the student senate of a discussion in which Denton advised against financially supporting BlackLivesMatter.com, Reclaim the Block, and the ACLU because “all advocate for things that are explicitly anti-Catholic.”

Reclaim the Block “claims less police will make our communities safer and advocates for cutting PD’s budgets. This is a little less explicit, but I think it’s contrary to the Church’s teaching on the common good,” he stated.

When it appeared his remarks had upset some participants, Denton messaged that he didn’t “mean to anger anyone” but had a duty to speak up.

“If I stay silent while my brothers and sisters may be supporting an organization that promotes grave evils, I have sinned through my silence. I love you all, and I want us all to be aware of the truth,” he wrote.

In the ensuing controversy, Denton was accused in a change.org petition demanding his removal of “transphobic and racist remarks.”

An op-ed in the student-run magazine The Spire contended Denton was “unfit” to be president and the FSU chapters of Amnesty International and Pride Student Union called for his resignation.

Most significantly, “student senators mocked and misrepresented his remarks and, after a failed attempt on June 3, removed Denton from leadership as the SGA’s (Student Government Association) student senate president on June 5,” an ADF press release stated.

The student government has since refused to fill vacancies on the Student Supreme Court to hear Denton’s appeal, “leaving him in limbo possibly until his term ends,” the College Fix reported.

The lawsuit states that although Denton appealed to Hecht to overrule the Student Governance Association’s (SGA) unlawful action against him that contravened its own internal policies, FSU officials took no action “despite having the authority and the duty to do so.”

It claims the student government violated its constitutional obligations by subjecting Denton’s privately stated beliefs to “an ad hoc religious test for office.”

Denton’s beliefs “have implications for some social issues that some consider offensive” but are protected by the First Amendment, it states.

The college senior suffered financial harm and “permanent” reputational damage because of his removal, the suit alleges. Denton will be out some $850 in official pay if not reinstated this fall, as well as suffering the more damaging loss of “honor” from leading the Student Senate.

Moreover, because of the ongoing reputational harm caused by his ouster, Denton won’t be able to list his presidency on future job or graduate school applications, noted the College Fix.

The lawsuit alleges “First Amendment violations of Denton’s free speech through retaliation and ‘Content & Viewpoint Discrimination,’ and violation of his First Amendment free exercise of religion through ‘Hostility,’” it reported.

Denton is seeking preliminary and permanent injunctions to restore him as Student Senate president, and the “purge” of any files referring to his removal.

He’s also seeking nominal and compensatory damages for the violation of his constitutional rights and attorney’s fees and costs.

According to the College Fix, FSU general counsel Carolyn Egan told the university’s public radio station that Denton couldn’t sue the university because “student governments are created by students for the purpose of experiential self-governance.”

Since FSU has not “taken action to adopt the decision,” the university is protected from civil liability, she stated.

“The Student Senate voted to remove me for simply expressing my religious beliefs. That is an egregious attack on my First Amendment rights,” Denton told LifeSiteNews in July.

The student senate “has now set the precedent that they believe free expression doesn’t apply to people of Faith. However, we all know that the First Amendment is universal and extends to everyone. Florida State University’s Student Senate should recognize that,” he said.

“I was surprised that a fellow Catholic, a member of our tight-knit community, used our shared faith to oust me from my job on campus,” Denton added.

He commented in the group chat because the organizations “we were being asked to financially support” have “explicitly anti-Catholic” positions, he said.

“As a Catholic, I had to point out this discrepancy.”

In a curious twist, the student senate voted several days after it removed Denton to allow his successor, Daraldik — one of the defendants in the suit — to stay on as president despite accusations that Daraldik formerly made anti-Semitic remarks on social media, the College Fix reported.

Notably, an anonymous Change.org petition demanding Daraldik’s resignation documents that his old social media posts include “F**k Israel” and “stupid jew.” It says he also “compares the Israeli government to Nazi Germany’s genocide on the jews (sic).” The petition has about 10,600 signatures to date.