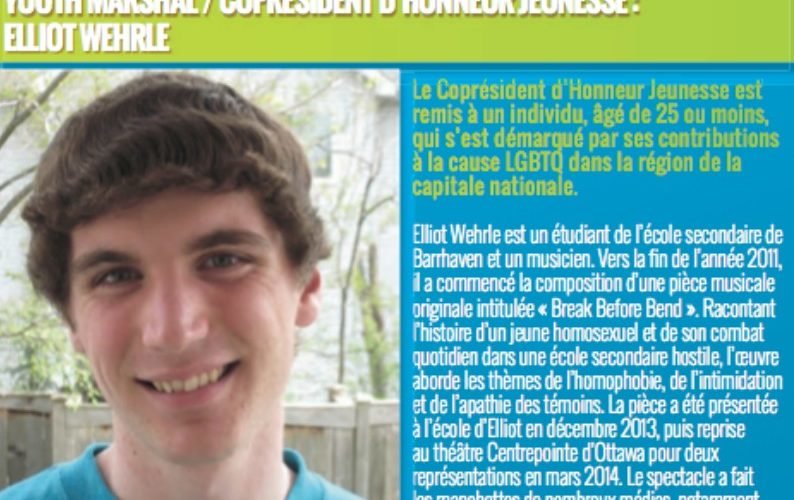 Wehrle said he was worried Mother Teresa High School wouldn't let him perform the play. Instead they, and the Ottawa school board, were enthusiastically supportive.

Update Aug. 26: Wehrle spoke to the homosexual news agency Xtra at the Pride event, excerpts of which are included in a Youtube video of Pride highlights. Link goes directly to Wehrle’s comments.

An Ottawa-area teen who wrote and directed a pro-homosexual musical that was recently performed in his Catholic school is being honored for his accomplishment by being named  “Youth Marshal” in Ottawa’s capital Pride parade this weekend.

The musical, titled “Break Before Bend,” sympathetically tells the story of a homosexual teenager and the struggles he faces while ‘coming out’ in school.

Capital pride officials awarded Elliot Wehrle, a now-graduated student from Mother Teresa High School just outside Ottawa, for being an “outstanding individual under the age of 25 who has made a significant contribution to the LGBTQ community in the National Capital Region.”

Pride officials called Wehrle’s musical a “story of a homosexual teenager who struggles in a less-than- tolerant high school. The piece deals with themes of homophobia, bullying and bystander apathy.” Ottawa Community News described it as a “story of homophobic persecution.”

Wehrle explained to Ottawa Community News in March his motive behind the musical.

“What I want to focus on impacting is all of these bystanders who support people like Jesse [the homosexual main character] internally, and I want them to take that support and bring it out into the world, into the halls and the classrooms and show that they really support him.”

“Elliot is proud of ‘Break Before Bend’s’ [sic] impact on both straight and LGBTQ audiences and is honoured to be recognized by Capital Pride as the 2014 festival’s Youth Marshal,” the Capital Pride guide states.

Capital Pride did not respond to LifeSiteNews’ request for comment by press time.

The musical, consisting of 23 original songs with lyrics, was performed in Mother Teresa High School with the approval of all levels of administration — including the Ottawa Catholic School Board — in December. Many members of the musical’s cast came from the school’s gay-straight alliance “Roy G Biv,” which will be in its fifth year of existence this fall.

The play was eventually taken by Wehrle and cast to Ottawa’s Centrepointe Theatre where it was performed twice in March. All proceeds of the performance — about $3,600 — were donated to the Youth Services Bureau of Ottawa, a pro-homosexual organization that specializes in “sexual health” for young people. Their work includes the promotion of “more unconventional subjects like kinks and fetishes” and explicit “‘how-to’ instruction” for having sex.

Xtra reported in March that Wehrle, who is not same-sex attracted, was not surprised that his Catholic school allowed the musical to be performed. “Our school is pretty progressive,” Wehrle told Xtra at that time.

Wehrle said that Mother Teresa administration were also supportive of the musical.

“When I first brought the idea to them, I was a little bit cautious,” he said at that time. “But somehow the idea of having a gay character didn’t faze the administrators. They quickly assured me that they had zero problems. They were very good to me and to the show,” he told Xtra.

Even the Ottawa Catholic School Board (OCSB) came on board to support the musical.

Mardi de Kemp, manager of communications at the OCSB, told Xtra in March the school board was “very proud of Elliot” for his accomplishment. When LifeSiteNews asked de Kemp about the accuracy of the comment, she did not deny making it.

While the OCSB supported the performance of the musical in Mother Teresa High School, it nevertheless restricted the audience to Grade 12 students.

When LifeSiteNews asked the OCSB to comment on having one of its students performing an official role in the homosexual parade because of a project he did in a Catholic school, de Kemp responded: “Eliot Wehrle is no longer a student at one of our schools. In any case, we would not comment on the private life of a student.”

Musical loves the sinner and the sin

The Catholic Church teaches that same-sex attracted persons must be “accepted with respect, compassion, and sensitivity.” At the same time, however, it calls homosexual acts “intrinsically disordered” for being “contrary to the natural law” in “clos[ing] the sexual act to the gift of life.”

“Homosexual persons are called to chastity,” says the Catechism. “By the virtues of self-mastery that teach them inner freedom, at times by the support of disinterested friendship, by prayer and sacramental grace, they can and should gradually and resolutely approach Christian perfection.”

Wehrle, however, seemed to be unaware of this teaching, and the traditional distinction between loving the sinner and hating the sin, telling Xtra in March that Catholic schools should not oppose students who promote acceptance of LGBT rights.

“LGBT rights do not have to be at odds with faith in schools,” he said at that time. “The predominant messages of Catholicism have to be love and acceptance; these are the messages that should be promoted.”

Wehrle did not respond to a request for comment by press time.