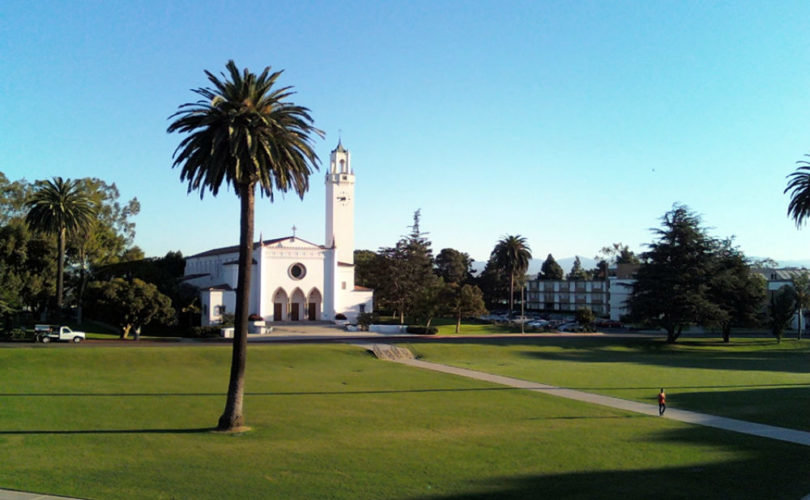 LOS ANGELES (LifeSiteNews) — Students and alumni of a Jesuit university in Los Angeles are petitioning its president to declare that students cannot be forced to list their gender pronouns. A professor had tried to do so “on penalty of reduction of their grade.”

Loyola Marymount University (LMU) alum Anne Rosen is spearheading a petition that blasts the requirement as violating not only “the service of faith” through its promotion of gender ideology, but also violating the right to free speech and the right to privacy.

The petition had collected 248 signatures as of the morning of November 30, according to RenewLMU, which is a “Movement of Alumni, Students, Donors, and Allies to Strengthen LMU’s Catholic Identity.”

Dr. Christopher Miller, who teaches Jainism and Yoga studies at LMU, told students in an email on September 9 that “all are required to include their pronouns next to their name in their blog posts,” adding, “I will count this toward your grade when I check for your name each time I grade the blogs.”

In her letter of petition, Rosen linked to LMU’s “freedom of expression” policy and noted that “The right of free speech, which LMU says it protects, includes the right to remain silent, the right not to say something that you do not want to say. Compelled speech is not free speech.”

Rosen also protested that gender ideology, which includes the idea that “sex and gender are mere social constructions,” has “been repeatedly and strongly criticized by Pope Francis.”

Indeed, gender ideology is innately contrary to the Catholic faith itself. As the Ukrainian Greek Catholic bishops have pointed out, it denies “the most obvious anthropological reality” and our God-given identity, it “destroy[s] the concept of family as a community of husband and wife,” and it “creates a dangerous psychological instability that leads to absurd conflicts between bodily and psychological sexuality …”

“Any university whose mission statement includes the service of faith should protect students of faith from being forced to act against their faith,” Rosen added in her letter.

She lamented that not just the professor, but the school as a whole is pushing gender ideology through the “Chosen Name Project,” under which students have “the option to add a chosen name” and “preferred gender and pronoun identities” to their personal information page.
Dr. Miller even noted in his instructions to students that their own LMU provost “links” to an article on gender pronouns “in his own signature after he identifies his pronouns.”

“LMU can’t seem to stay out of the media for even two weeks per their blatant disregard for Catholic doctrine,” said LMU GOP President Will Donahue. “I urge LMU to think deeply about the kind of school that they would like to be. Do they want to continue to spit on their Catholic heritage and allow this repugnant act to go unnoticed, or will they do the right thing this time and fire Prof. Miller for his abuse of power?”

“Forcing students to write pronouns with the threat of getting marked down is a clear case of shoving Marxist rhetoric down the throats of students and compelling speech,” he continued. “It’s tyrannical, and students should leave LMU if this is allowed to become the new normal on our campus; It’s only going to get worse.”

Today, the California College Republicans have joined their LMU chapter and RenewLMU in “condemning LMU and University President Timothy Snyder for allowing professors to mandate use of gender pronouns on assignments.”

A professor of philosophy at LMU predicted in 2016 that “the process of secularization” at the university “will be completed within a generation.” LMU actions in opposition to Catholic teaching indicate that the secularization of the university had already been well established by that time.

Also in 2016, an LMU employee was suspended for telling students that there are only two genders.

At that time, only about 24 percent of the university’s professors identified as Catholic, according to a “Faculty Climate Survey.”

As far back as 2010, the university had established an Office of LGBT Services. It has also permitted a gay student organization, the Gender Sexuality Alliance (GSA), which sponsored an on-campus event in 2011 including a lesbian-themed comedic event and drag performance.

In 2014, LMU hired professed atheist Dr. Robbin Crabtree as Dean of the Bellarmine College of Liberal Arts, despite both her lack of belief in Catholic teachings or in God, and her history of having handled media relations for a Planned Parenthood chapter.

In fact, LMU has directly or indirectly endorsed abortion many times. It has repeatedly invited pro-abortion speakers and it was promoting internships for abortion advocacy organization Feminist Majority Foundation (FMF) in 2015.

Most recently, LMU allowed a fundraiser for Planned Parenthood to be held by a college feminist club, prompting outrage and a peaceful campus protest against the fundraiser, joined by hundreds of pro-lifers.