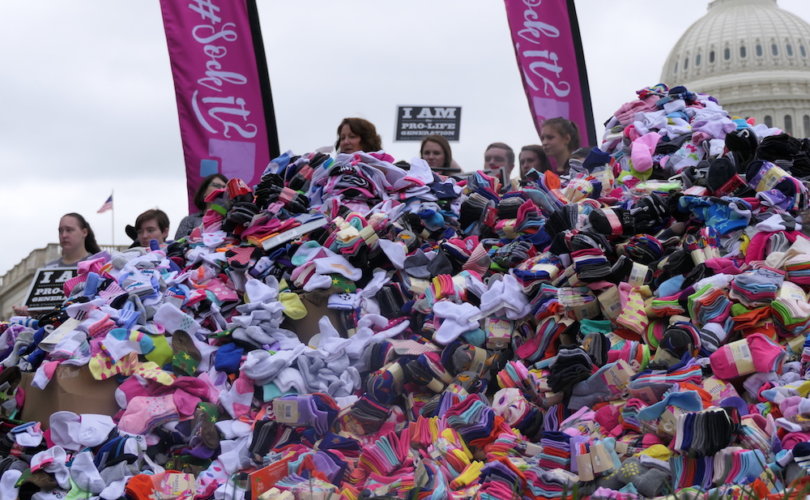 September 22, 2017 (LifeSiteNews) – Pro-life students and youth are bringing over 300,000 baby socks to college campuses to show how many abortions Planned Parenthood commits annually and demand that it be defunded.

Students for Life of America (SFLA) launched its #SockIt2PP tour on Tuesday. The tour will showcase the 328,348 baby socks SFLA crowdfunded this year, one for each baby aborted by Planned Parenthood annually.

The brightly-colored truck in which the socks will be carried across the country says this on the side. It will visit six cities in four days and 90 college campuses.

In April, SFLA piled more than 200,000 of these socks in front of the U.S. Capitol at an anti-Planned Parenthood rally.

SFLA then delivered 88,000 socks to the office of Speaker of the House Rep. Paul Ryan, R-Wisconsin. Each sock represented one baby killed by abortion at Planned Parenthood since President Trump took office.

“Planned Parenthood has lied to the American public, committed fraud with taxpayer dollars, and has been proven to sell the body parts of baby’s they abort for profit,” said Kristan Hawkins, president of Students for Life of America. “Yet Congress continually fails to defund Planned Parenthood. The pro-life generation is sick of being told to wait until another election season has passed. We are expecting Congress to uphold their promises and stop subsidizing America’s largest abortion vendor.”

As part of the tour, SFLA will display abortion tools, banners explaining that abortion is violence, and a non-graphic video showing how an abortion is committed.

“Students deserve to know the truth about the violent nature of abortion,” said Hawkins. At the press conference launching the tour, she noted it has been more than two years since undercover videos from the Center for Medical Progress showed Planned Parenthood illegally harvesting the body parts of babies it aborts.

The truck full of socks will park in front of the local office of Sen. Joe Manchin, D-West Virginia, a supposedly “pro-life” Democrat who has expressed support for Planned Parenthood, on September 22.

Paul is one of the main obstacles to the latest GOP plan to scrap Obamacare and defund Planned Parenthood.

“The pressure’s on,” said Hawkins.

“We are calling on Senator Rand Paul to either support a pro-life healthcare reform bill, like Graham-Cassidy, or propose one that can pass now,” Hawkins continued. “The disastrous status quo that is Obamacare is harming families, using our taxpayer dollars to fund abortion, and [lining] the pockets of Planned Parenthood’s billion dollar abortion industry. Voting against Graham-Cassidy would put Senator Paul on the same side as the abortion Goliath, Planned Parenthood.”