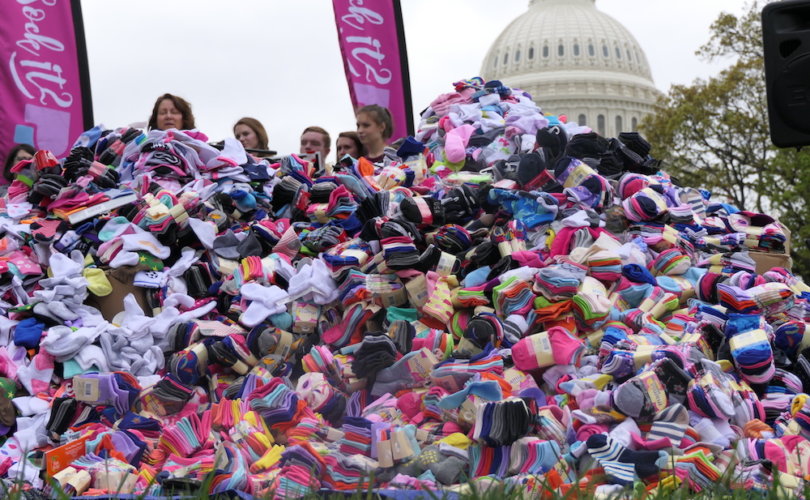 “This Congress pledged to defund Planned Parenthood and the pro-life generation intends to make sure they live up to those promises,” Kristan Hawkins, president of Students for Life of America (SFLA), told LifeSiteNews. “Defunding Planned Parenthood isn’t really controversial within the GOP leadership right now.” The problem is “they can’t get their act together on other issues.”

SFLA will continue collecting baby socks until they have 323,999 – the number of abortions Planned Parenthood commits annually.

“It’s just a devastatingly large number and we need to have images like this so that people start to reflect on the magnitude of the suffering that’s happening out there,” said Sasse. He thanked those attending “for what you do to celebrate life and to celebrate a culture of life” and for their decision “to tell the story this way.”

Sasse blasted the new chairman of the Democratic Party, Tom Perez, for his recent comments saying all Democrats need to be pro-abortion and this is “not negotiable.”

“He said that the Democratic party has to be a party that doesn’t have any room for people who believe that a baby in a mom’s tummy is a baby,” said Sasse. “That is bizarre. I’m a conservative Republican, but I care about a whole bunch of things far more than I care about the Republican party or the Democratic party and one of the fundamental ones should be that America exists to fight for the most vulnerable … that should be an American proposition and that should be a human proposition.”

Sue Thayer, a former Planned Parenthood director who's now pro-life, also spoke at the rally. She told LifeSiteNews that when SFLA's truck full of socks arrived on Capitol Hill, she had to “just kind of step away for a little bit” because of how overwhelming the sight was.

“Each one of those socks should have a little foot in it,” said Thayer.

Hawkins said when the truck arrived, she was talking to passers-by “telling them what the socks represent and people’s jaws were dropping.”

Ryan apparently wasn't in his office when the pro-life students brought him laundry baskets of 88,000 socks. A staffer spoke with Hawkins and said he would convey the message to Ryan.

“Only scheduled appointments will be admitted,” a sign on Ryan's office door said.

Now, “the socks will be going on the road for a little bit,” Hawkins told LifeSiteNews. “We have some activism displays prepared … I think we might be seeing these show up on college campuses in the nearby future.”

An 18-year-old high school student who is currently pregnant also spoke at the rally about choosing life and rejecting Planned Parenthood's lies. Her testimony received the most applause.