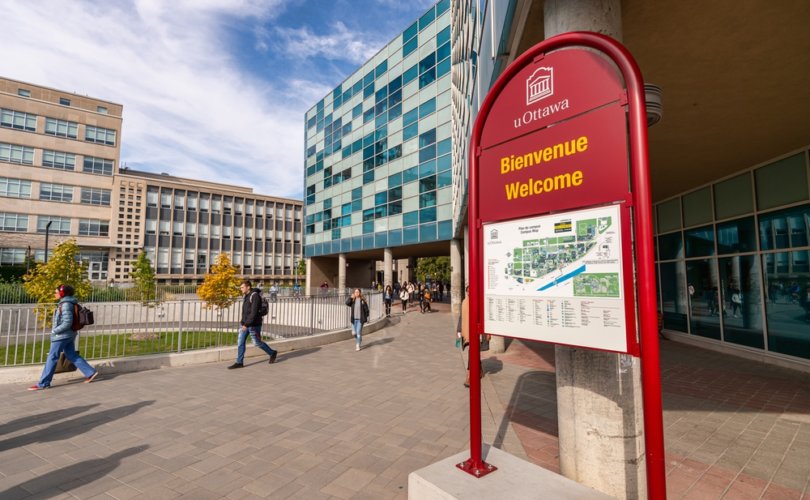 OTTAWA, Ontario, March 23, 2020 (LifeSiteNews) – The University of Ottawa Students for Life (UOSFL) will write directly to their university president demanding he reinstate them as a club, after a vote by the university student union failed to overturn a December prohibition of them.

Garifalia Milousis, co-president of UOSFL, told LifeSiteNews that an appeal to get the club’s status restored at the February 23 board meeting of the University of Ottawa Student Union (UOSU), was not successful.

Milousis said their next step is to send a letter to University of Ottawa President and Vice-Chancellor Jacques Frémont, to put pressure on him to respect free speech on campus.

“At this point, the only step that we are taking right now is to write an open letter to the president of the university decrying what’s happened and calling for his action,” Milousis told LifeSiteNews.

The Student Life Committee, which serves as a sub-committee within the UOSU, voted to ban the club in December 2019.

The UOFSL was not able to get the four-fifths majority needed from the UOSU board to overturn the Student Life Committee’s December ban, meaning they will not be able to regain official status.

According to Milousis, the UOSFL does have legal counsel helping them with their case, but as it stands now, the only action being taken is to put pressure on Frémont.

Milousis says that they are taking this approach with the hopes that recently introduced legislation in Ontario from the Doug Ford government, which mandated that all publicly assisted colleges and universities have a free speech policy, might help.

“We are trying to really impress upon the President the importance of him getting involved because of the potential legal ramifications of the UOSU making these determinations.”

Milousis noted that although historic case law in Ontario has ruled that universities and student unions are separate entities, meaning that student unions are not subject to the charter, the recent “Doug Ford Policy” changes the landscape.

She also mentioned the Alberta Court of Appeal recently rejecting the University of Alberta’s imposition of a $17,500 security fee on the University Alberta Pro-Life club.

This pro-life victory was hailed a win by the Justice Centre for Constitutional Freedoms, a group which has helped many individuals and organizations fight laws targeting free speech in Canada.

The doors were locked

UOFSL was originally going to present its appeal of the UOSU board meeting on February 16. However, Milousis told LifeSiteNews that when they showed up for the meeting, the doors were locked with no sign of a meeting.

Milousis said that her group later found out that the UOSU had notified students via their Facebook page in a February 6 post, that the UOSU’s February 16 Board Meeting was rescheduled to February 23.

“The UOSU and the Student Life Committee both failed to notify our club about this important development, wasting my time and the time of my colleague, as well as causing us emotional stress and anxiety,” Milousis told LifeSiteNews.

The ban on the UOSFL was driven in part by a 500-signature petition against them, which was started by fifth-year University of Ottawa biology student Bridget Dueck.