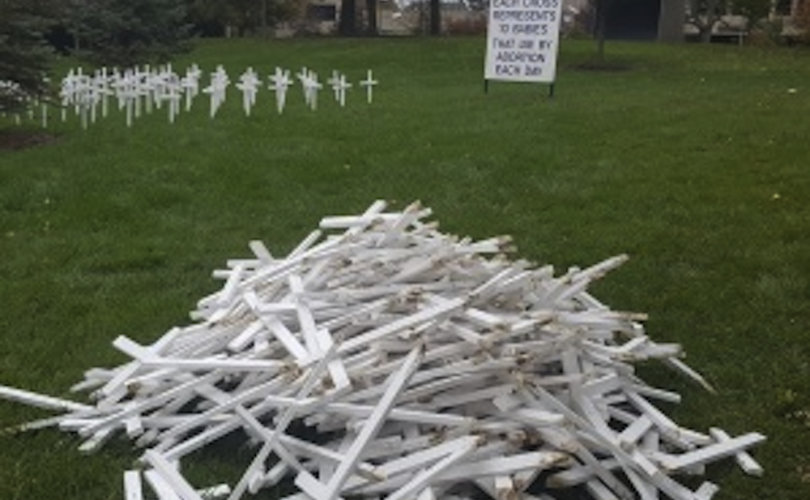 Crosses vandalized at Northern Kentucky UniversityStudents for Life of America

HAMILTON, Ohio, December 1, 2017 (LifeSiteNews) — Alliance Defending Freedom has filed a lawsuit on behalf of Students for Life against Miami University at Hamilton for targeting pro-life speech with warning signs to keep students away.

Many local Students for Life of America (SFLA) chapters erect “Cemetery of the Innocents” displays, often with crosses or tombstones to demonstrate the number of babies killed by abortion. The complaint, filed with the U.S. District Court for the Southern District of Ohio, claims that school officials would not allow the peaceful display without putting up warning signs around campus.

A SFLA press release explained, “School officials wanted to characterize the students’ free speech display as a triggering event that should be negatively portrayed to the student body with signs.”

“The unnecessary obstacles students experienced at Miami University of Ohio Hamilton sadly is all too common on campuses across the country,” SFLA president Kristan Hawkins noted. “Students peacefully trying to hold an exhibit that inspires conversation about their love and concern for preborn infants and their mothers should be protected.”

The Miami University’s main campus in Oxford was the sight of vandalism against pro-life speech last month. Pro-life students’ display entitled “When Do Human Rights Begin?” was destroyed along with their Cemetery of the Innocents display.

“At one time, students from across the country and around the world came together on college campuses to debate the issues of the day and learn from each other,” Hawkins pointed out. “But recently, administrators treat students like fragile children who don’t have the capacity for respectful and honest interaction. Not only is this unconstitutional, it sells this generation short as they should be taught how to engage in the free marketplace of ideas, and school officials should be building a culture capable of peaceful communication.”

“No university official has the authority to censor student speech simply because of how someone might respond to it,” Alliance Defending Freedom legal counsel Travis Barham explained. “Like all government officials, public university administrators have an obligation to respect students’ free speech rights. The First Amendment … prohibits imposing ‘trigger warnings’ that restrict what some students can say to spare the feelings of others.”

SFLA has documented dozens of acts of violence against their pro-life displays. An interactive map of pro-abortion attacks may be seen here. Hawkins says the map shows “the kind of opposition our students face daily as they speak up for the humanity of a preborn baby and the life-affirming options that women have.”

At Northern Kentucky University, abortion supporters tore up a “Cemetery of the Innocents” display both this year and in previous years. The violent reaction has been going on since 2006, but school officials have not come up with a working policy to stop the anti-free speech violence.

At St. Louis University, a Catholic school, students tore up the crosses of a Cemetery of the Innocents twice — ironically using violence to attack a display lamenting victims of violence. The Catholic school has photos of the vandalization but has made little progress in doing anything about it.

At Baldwin Wallace University, SFLA members wrote positive, pro-life messages on the ground in chalk. The messages affirmed the love for both woman and child, and offered messages of hope for people dealing with the effects of an abortion.  But pro-abortion students destroyed the messages and bragged about it on social media. Then they promoted their activity to raise funds for the abortion industry.

Examples of violent intolerance against pro-life speech could be multiplied. University administrators have destroyed displays at Kutztown University, and vandals have thrown paint on pro-life messages at Portland State University.

SFLA members, however, are undaunted. “We promise you that even when abortion activists destroy our peaceful message, we will be back, more determined to let women know that we are here to help them and their children, born and preborn,” Hawkins vowed.