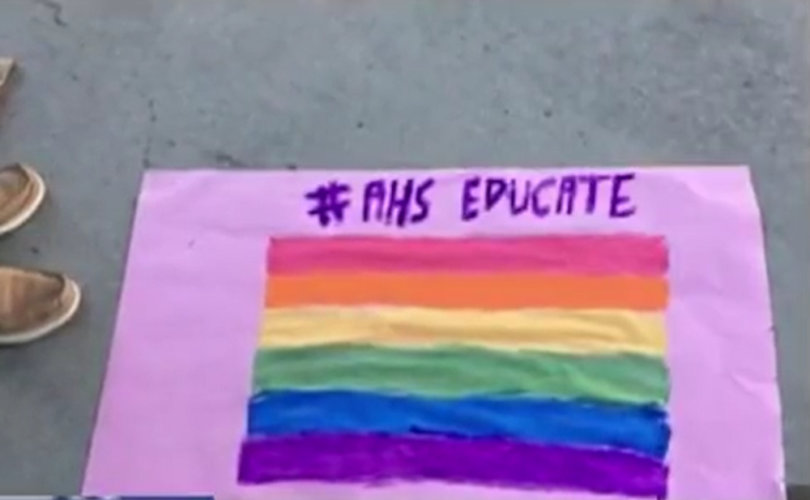 AUBURN, Alabama, August 29, 2017 (LifeSiteNews) – Students and parents at Auburn High School are asking for the removal of a gay pride flag hung in one of the classrooms by a teacher, ironically applying the argument used to take down Confederate battle flags and statues of Civil War figures from government buildings, college campuses and other public venues.

The pride flag in the teacher’s classroom “creates a hostile and provocative learning environment for students not comfortable to openly supporting the LGBTQ+ community in a public school where students come from diverse political and religious backgrounds,” according to a Change.org petition filed by Andrew Monk of Auburn.

The petition had nearly 3,600 signatures by press time with an initial goal of 5,000.

The teacher is identified in the petition as Mrs. Yeager. The Auburn High School website lists Justin Yeager as a mathematics teacher and Donna Yeager teaching social studies.

The petition further states, “It is unprofessional and distracting for a teacher to be so openly displaying their political views in an unbiased and socially neutral public setting.”

It stipulates that signers don’t take issue with the teacher’s support for the LGBTQ+ community.

However, it states, “we do feel it creates a less than ideal learning environment when a teacher subjects their students to their personal political views in a public school system.”

The petition re-emphasized how this can create “a hostile and uncomfortable learning environment” for students who come from families that do not support the LGBTQ community.

The teacher’s expression of such a polarizing view is a detriment to the overall learning environment of the class, it said, because it alienates students with opposing political viewpoints and it also drives a wedge between students with differing viewpoints.

The petitioners also raise the point that were a teacher to display a Confederate, Christian, or heterosexual flag in their classroom, there likely would be protests, pushback from teachers, and threats of lawsuits from parents who held different views.

Auburn High School Principal Shannon Pignato had not been presented the petition as of a week ago last Friday, said Auburn City Schools Superintendent Karen DeLano in a report from WRBL.com. DeLano said Pignato was aware of it and that the situation was being handled internally.

DeLano acknowledged in a statement that societal issues were making their way to the school system’s campuses, and given that so many today are “addressing their objections through violence and hate, it is my sincere desire to assist our students in learning to address their opinions and their values in a calm and respectful manner.”

She said it was most appropriate for the students discussing the matter to come to together with faculty to work on handling it while staying within the law, upholding freedom of speech, and maintaining orderly classroom learning.

An Auburn High School student started a counter petition shortly after the first petition protesting the gay pride flag. Brandon Sinniger is involved with the LGBTQ cause in the school and the community. He wanted to show support for the teacher, the flag, and the idea behind them, the news station report said.

Sinniger said last Tuesday the flag was still in the classroom and that he thought it had the administration’s support in staying there.

His counter petition had more than 7,200 names by press time. In another instance of irony, the counter petition contradicts the prevalent anti-free speech narrative often advanced to silence advocates and supporters of conservative or Christian values on countless campuses across the U.S.

“In the real world, to suggest individuals be isolated from differing political views is an absurdity,” it says. “To be made uncomfortable by opinions differing to your own is to function as a modern human. Attempting to insulate a student from political discourse would be an insult to their intelligence.”