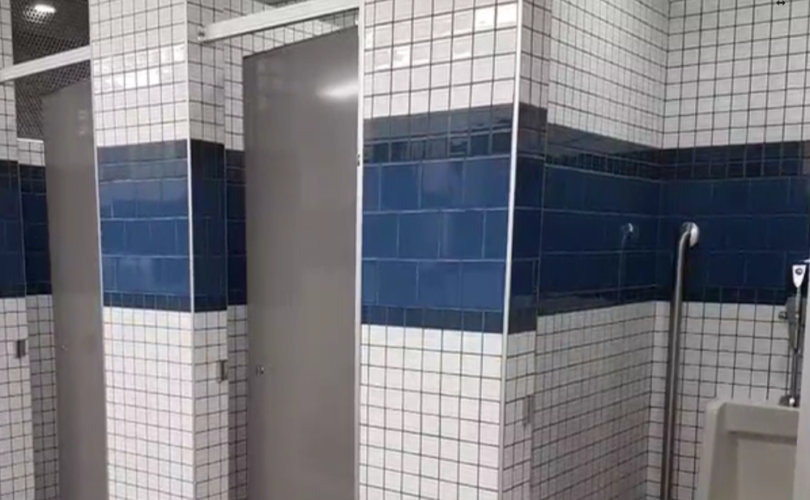 Alberta students are finding they are not so comfortable sharing toilets with the opposite sex, whether transgender or not. A lot of students are asking school officials to revert back to gender-specific bathrooms.

“The first day of school, when we all walked in and saw the bathrooms were gender neutral and everybody could go into the other gender’s bathroom, it was bizarre,” junior Graeme Gibson told Global News. “First, it was a shock, then everybody was like, ‘Why is this happening? What the heck is going on?’”

Each gender-neutral bathroom has seven toilet stalls and three urinal stalls. The stalls have a gap at the bottom and at the top, and so they are not completely private.

Austin Kirk, another junior, agreed that the bathroom situation was “bizarre.”

“The first time I saw them, I was nervous, and I was like, ‘OK, I’m just going to not use the washroom today,’” he said.

That’s what many students are doing: avoiding the transgender toilets by going way out of their way to the only gender-specific bathrooms or just holding it.

“I have a chemistry class on one side of the school next to the gender-neutral washroom,” Kirk said, “but there’s a washroom in the lobby that is just a boys washroom and I walk there every time I need to use the washroom.”

Global News reported that some students are often late for class because of the long waiting lines for the gender-specific bathrooms.

Students have also discovered that “gender-neutral” bathrooms violate one’s privacy, especially girls’ privacy in changing tampons or pads. “I find it uncomfortable. I have other things to do than boys in there,” Jacey Taylor said. “You can hear it.”

“You can peek both over and under so that’s a privacy issue right there,” junior Evan Gabbey told CBC News.

Gabbey also noted that the school’s transgender-accommodating bathrooms far outnumber those for the majority of students. “There’s (only) one set for male and female and that does not at all represent the population of people.”

After Principal John Baldassarre did not satisfactorily respond to his complaint, Gabbey started a petition drive for more gender-specific bathrooms.

The student response was overwhelming. On the first day, “I alone had 112 signatures. The only reason I couldn’t get more was I ran out of forms, I couldn’t get enough,” he said.

In just one week, half of the 680-member student body signed the petition. On November 8, it was presented to Sturgeon School Division trustees.

Gabbey said he’s not against transgender accommodations, but the ratio of “gender-neutral” bathrooms to normal ones does not reflect the needs of students.

Gabbey also thinks multiple stalled gender-neutral bathrooms is a mistake. “I don’t know whose idea this was, but it wasn’t a very good one,” he said. “You don’t see them anywhere, yet we throw them into our schools and assume it’s just fine.”

The principal defended his school’s new setup. “Imagine being somebody who’s part of an LGBTQ community or has an identity or a diversity issue … being forced to have to go use a specific washroom,” Baldassarre said. “I mean, for me personally, it brings back shades of 1950s segregation in the southern U.S.”

“We have an inclusive community environment and so students should have choice,” Baldassarre continued. “They should not be forced to go and use one stall because that’s their stall.”

Concerned parents recently started a Facebook group, “SCHS Washroom Fiasco.” “This single issue has dominated student discussions this term,” the Facebook page states.  “There is only one set of designated male/female. Most students are uncomfortable with, and refuse to use, the co-ed washrooms.”

“People are starting to perk up because our school is not the only school that’s implementing policies like this,” said Amber Harris, the mother of a Sturgeon Composite student who started the Facebook forum. “To make arbitrary decisions like this and not involve the parents is a gross injustice.”

“Just under 700 students … are trying to access 3 male/3 female washrooms located at the far end of the school by the offices,” the Facebook page reported. “The result is long lines, discomfort waiting and being late for class.”

“The stalls didn’t go from floor to ceiling, they were not self-contained units and obviously, as a parent, that raised red flags for me,” Harris, who is also deputy mayor, explained. She noted incidents elsewhere of teens “committing suicide because of photos” posted online and concluded that multiple open gender-neutral stalls “just feels like we’re setting this up for disaster.”

To the charge that parents were not consulted, Baldassarre responded that they were, and cited a “parent evening” during the design phase of the bathroom remodeling.

Student Evelyn Kostiniuk commented that the problem is privacy, and the current accommodations leave the school open to litigation. “We live in a world where a picture of a student in the washroom can ruin someone’s life and future,” she posted on the Facebook protest page. “These washrooms leave room for privacy violations and inevitably a lawsuit.”

“Students don’t feel comfortable with the open concept of these washrooms and the lack of privacy and security,” Kostiniuk added.

The reconstruction project is ongoing, and another multi-stall bathroom will soon be ready for use. Whether it will be gender-specific or “gender-neutral” will be decided at a school board meeting on Wednesday, November 22.