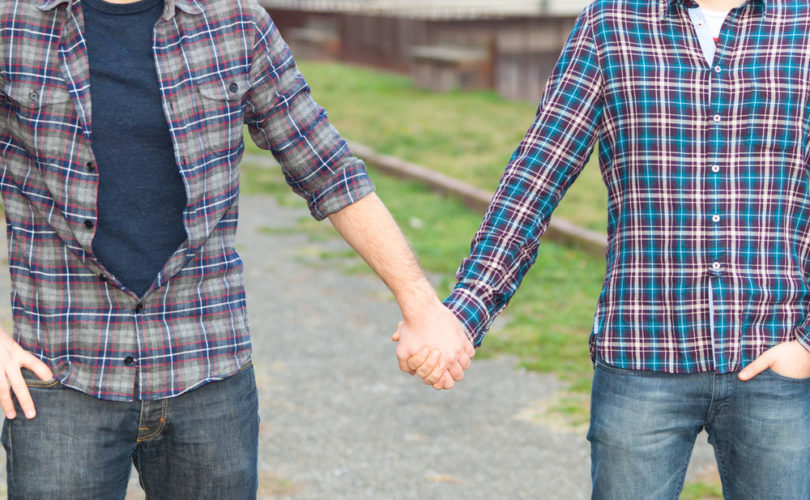 More than 100 students staged a walk out at Dowling Catholic High School in West Des Moines, Iowa, yesterday to protest the school's decision not to offer a substitute teacher a full-time job after discovering the applicant – Tyler McCubbin – was “engaged” to another male.

“The Catholic faith is central to our mission, and in order to deliver on that mission it is our expectation that staff and teachers support our moral beliefs,” the superintendent, Luvern Gubbels, Ed.D., wrote in a letter to parents, which did not identify McCubbin by name.

Gubbels added, after that, although officials completed the interview process, “a formal written contract wasn't extended owing to a personal situation that was at odds with Church teaching.”

McCubbin told local media that after school officials asked if he was in an open homosexual relationship and about to be “married,” he replied, “'Yes it’s true. I’ve been engaged for almost a year now.' And they said, 'Because of that, we can’t offer you the contract.'”

He called the school's reaction “shocking.”

However, the school allowed McCubbin to remain on staff as a substitute teacher and coach. Bishop Richard Pates of the Diocese of Des Moines said that was inappropriate. “Based on church doctrine, he should not be a sub,” he said.

During that time, word spread that he had been denied a permanent job, and opposition was built up from inside the school as well as outside.

Media report that between 150 and 200 alumni, parents, and students staged a walk out Wednesday, demanding the religious school hire an open homosexual. (Sources within Dowling Catholic High School told LifeSiteNews that the number was closer to 120, and that many of the students who left did so only to get out of class.)

“The choices of our school leaders and our diocesan leaders don't directly reflect what we believe as students,” Grace Mumm, a sophomore, told KCCI-TV.

Another student, a junior, announced, “I am openly bisexual,” to cheers.

They closed their protest with prayers.

At the Wednesday rally, many students asked the school to become more gay-friendly by forming an LGBT Alliance group. Father Zach Kautzky told local media he is in an “ongoing talk” about the group's formation, but if it takes place, homosexual and bisexual students must “be encouraged to live in chastity, the life they are called to.”

On the eve of the protest, Bishop Pates stressed that “we respect all persons and civil law in regard to civil unions,” but “the Church teaches based on natural law, Scripture and the Church's 2,000-year tradition that marriage is a sacrament between a man and a woman. The Catholic faith is central to our mission as a Catholic school and is an exercise of religious liberty. To deliver on that mission, it is our expectation that staff and teachers support our moral beliefs as they are the models of our Catholic faith.”

The state's homosexual lobby decried the situation while admitting that the school had the right to make its own employment decisions. “America's first freedom is freedom for and freedom from religion,” said Donna Red Wing, executive director of the LGBT pressure group One Iowa. “While we are disappointed with the school's decision not to hire an openly gay teacher, we hope school officials will nonetheless encourage its students and faculty to be respectful” of those who violate Biblical morality “as the Catholic Church struggles with these important issues.”

The anti-Dowling protest also spread online, where more than 1,000 people have formed a Facebook page dedicated to convincing the diocese to hire open homosexuals, and commentators have inveighed against the administration.

Scott Alessi wrote at U.S. Catholic that “Pope Francis has repeatedly called for a church of mercy, one that does not focus on the faults of its members or obsess over a narrow set of doctrinal issues. The church’s employment policies should take a similar approach.”

Des Moines is far from the first diocese to face such controversy. Bishop Robert Vasa of the Diocese of Santa Rosa, California, faced harsh backlash when he added a morals clause to his teachers' contracts in 2013. In a special document entitled “Bearing Witness,” he wrote that Catholic educators do not merely instruct but play a lasting role in students' permanent “spiritual, dogmatic, moral formation.” That spiritual authority “imposes a responsibility upon me to make sure that the Catholic formation in that school is consistent with what the Catechism and the Holy Father proclaim to be the teachings of the Church. A failure to do that is an abdication of my responsibility.”

Iowa State Sen. Matt McCoy, who is a Dowling alumnus, accused his alma mater of bearing a peculiar animus against homosexuality, because it has “many faculty members that are divorced. They have many faculty that have been involved in extramarital affairs.”

But the record is not at all clear that Dowling Catholic High School is particularly anti-gay. Sources told LifeSiteNews that the school allowed the Eychaner Foundation, a tax-exempt organization dedicated to mainstreaming the acceptance of homosexual behavior, to present one of its 2014 Matthew Shepard Scholarships to a Dowling Catholic High School student, Danni WebbMausbach, at a school awards ceremony. WebbMausbach said she hopes to become a full-time employee of the homosexual lobby, and “eventually, when I am a lawyer, I want to help other people in the LGBTQ community with civil cases.”

In the meantime, the faithful of all backgrounds view this protest as another sign of the culture's attempt to impose its agenda on the Christian church and religious institutions.

Todd Erzen critiqued McCoy, blogging, “Remember when we were told, like yesterday, that somebody’s 'gay marriage' wasn’t going to impact the rest of us at all? Yet increasingly the question we must ask ourselves is 'when doesn’t it?'”