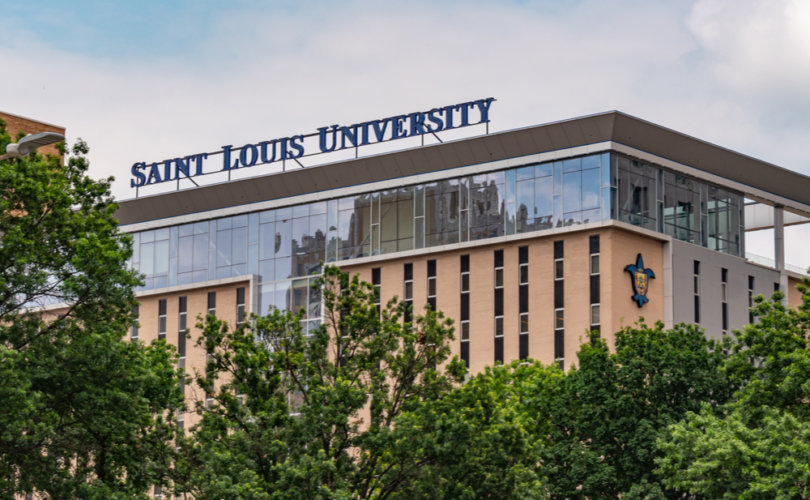 (LifeSiteNews) — Students at a Catholic university are speaking out against recent incidents and teachings that are contrary to the Catholic faith.

Jesuit-run Saint Louis University has a history of anti-Catholic rhetoric and events promoted by school officials. Most recently, an employee was featured in an on-campus drag show, and religious affiliates of the university suggested that the Catholic Church supports the LGBT lifestyle.

Two students spoke with LifeSiteNews about a unified response from members of the university community who plan to present the issue to the Archdiocese of St. Louis, taking a stand against heresy and clarifying that not all students and faculty support these incidents that run directly contrary to the Catholic faith.

“St. Louis University has had a lot of very sketchy [and] anti-Catholic behavior in the last couple of years that I’ve been a student. So, at this point, I am dismayed but unsurprised with the behavior of SLU,” one student, who wishes to remain anonymous, told LifeSiteNews in a phone interview. “In the context of the greater student population, I’m a bit of a minority, but within the population of actually Catholic students, I am far from alone.”

Michael, another student who asked that his last name remain anonymous, told LifeSiteNews that he was “disappointed because my first reaction wasn’t one of surprise. It seems that despite being a Catholic school full of brilliant individuals, we keep on settling for the status quo, especially when it comes to LGBTQ. I’m not the only one that thinks that hosting a drag [show] isn’t the way forward.”

“We shouldn’t just accept the fact that there are so many events on campus that affirm this ideology,” Michael added.

In response to the history of anti-Catholic rhetoric that culminated in the recent drag show, members of the university community are joining forces to write a letter informing the Archdiocese of St. Louis of the issue and clarifying that events such as an on-campus drag show are not supported by all members of the community.

One student explained that because the school is “technically run by the Society of Jesus,” there will not be much that the diocese can do in response. However, the student added that “we wanted to at least make it clear that, one, this behavior is not in conformity with the teachings of Rome; and, two, this is not a … unanimous behavior on our campus.”

“We sent it to the local diocesan newspaper with the hope that they can shed some more light on the situation,” Michael told LifeSiteNews. “We’re not looking to attack anyone. In a lot of ways, we as students don’t know what to do, so we are hoping that we can get the word out and make people rethink the status quo and realize this isn’t what students want.”

At least 34 individuals have signed the letter, which will be sent to the archdiocese as well as the diocesan newspaper, the St. Louis Review.

Aside from the drag show scandal, St. Louis University has reportedly enabled various other offenses. One student shared that a theology professor once “tried to refute the teachings of St. John Paul II on [his book] Love and Responsibility.” One of the class readings “accused Our Lady of Guadalupe as being … something like an imperialist tool used to subjugate the indigenous women of color.”

“Our theology program has a lot of dissenting views on sexual morality and on dogmatic theology,” he said. “SLU’s campus ministry has made it very clear that they are not trying to uphold the Catholic faith as the one true faith.”

Last year, a group of students “attacked the cemetery of the innocents” that was set up by the university’s Students for Life club in honor of babies who had died in abortions. School staff also signed a petition “in opposition to the hateful rhetoric of Matt Walsh,” the Catholic speaker who was denied an appearance on campus.

While the unified response is pulled together, these students remain faithful Catholics through daily interactions. One described being a member of the Students for Life chapter as a way to “evangelize on the beauty and dignity of life through sidewalk poster events [and] small talks.”

“When I hear ideas that are contrary to the Truth, I push back against them,” Michael told LifeSiteNews. “If I can see the individual as important and have a relationship with them that recognizes them as beautiful and as more than their sexual identity, I think that is the best way to push against the lies that are rampant around us.”

“What we want is for the administration to realize that we don’t mind being Catholic,” he added. “We want to speak boldly without fear the joy that Christ proclaims.”

German bishop: Homosexual ‘attraction’ and ‘lovemaking’ not an ‘aberration’

College student thanks Catholic parish, family for saving her from becoming transgender