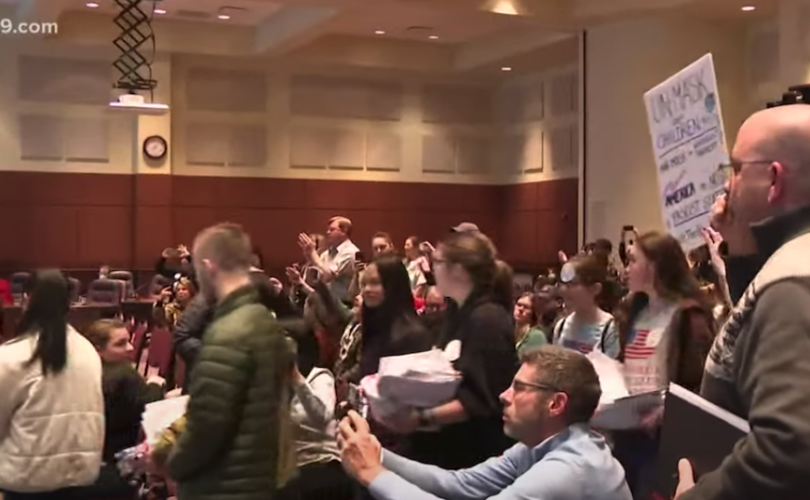 LOUDOUN COUNTY, Virginia (LifeSiteNews) – A group of parents and students served a Virginia school board with hundreds of affidavits Tuesday, demanding board members reverse a mask mandate and resign over recent sexual assaults by a “gender fluid” male student.

Around a dozen students walked to the front of a Loudoun County school board meeting Tuesday evening to deliver the notarized affidavits to the board, 7News reported.

A local mother had announced the documents during the meeting’s public comment period, describing them as cease-and-desist orders from parents and children. She told board members “to step down or abide to the demands set forth.”

“We are here today to serve you an affidavit by which you must respond with an affidavit and sworn testimony showing us where in the Constitution you have been given the legal authority to trample on the people’s rights,” the woman added.

“Children, please deliver the affidavits,” she said to cheers from the crowd.

Chairman Jeff Morse put the meeting into recess when the students tried to serve the papers.

WATCH: Chaos ensues as a woman orders approximately 14 children to serve an affidavit to the Loudoun County school board.

School staff eventually collected the affidavits, which were signed by 65 parents and concerned citizens, Megan Rafalski, a Loudoun County Public Schools (LCPS) parent, told Fox News. “We’re parents who want to be parents and look after our children,” she said. “We’ve tried to talk to them, they will not listen, so it’s essentially a list of demands, a list of grievances.”

The 14-page affidavits, prepared by parents, demand that LCPS remove a mask mandate for students “since the science shows that these are not necessary for the protection of children.” The documents additionally call on the school district to repeal liberal transgender bathroom policies, remove Critical Race Theory and sexual content from instructional materials, and stop asking children about their COVID vaccination status.

“Decisions regarding procedures for quarantines and return to the classroom are being made based on vaccine status,” the declarations noted. “Nowhere are these disparate treatments of students appropriate or allowed by policy. No parental permission has been sought to conduct these conversations as is required by law.”

“The Loudoun County Public School Board is infringing on the freedoms guaranteed to ‘We the People’ in the Virginia Commonwealth Constitution. Creating and/or enforcing health rules, mandates, and efforts to influence our children’s social emotional status is practicing health discrimination, segregation, sectarian instruction and intimidation,” the affidavits declared.

The documents are not legal pleadings, a school spokesman told 7News.

LCPS continues to maintain a mask mandate for students and school staff despite a January executive order by Gov. Glenn Youngkin that lets parents opt their kids out of masking rules. Loudoun County and six other school districts challenged the Republican governor’s order in a lawsuit last month, but a judge granted the districts a preliminary injunction last week, allowing their mask mandates to stay in effect.

Various studies, including large randomized controlled trials, have shown that mask mandates do not stop the spread of COVID-19. Research has also found that masks harm children, causing them to breathe dangerous levels of carbon dioxide and potentially devastating their cognitive development. Children face virtually no risk of death or serious illness from coronavirus. Between 0-0.01 percent of child COVID cases in the U.S. have resulted in death, according to the American Pediatric Association.

The affidavits delivered Tuesday also blasted LCPS for mishandling sexual assaults committed last year by a “gender fluid” boy who raped a female classmate in a girl’s high school bathroom. The boy was convicted of “forcible sodomy” in October and subsequently convicted of abducting and assaulting a second girl at a different high school, where the district transferred him after the bathroom rape.

Despite having alerted the school board about the first attack, Superintendent Scott Ziegler later told parents at a school board meeting that LCPS had no record of assaults in restrooms. The board was at the time actively considering a policy, approved in August, to let students enter bathrooms based on “gender identity.”

The affidavits accused the superintendent of “being complicit in the second sexual assault” for moving the rapist to another school. Ziegler and board members must “resign effective immediately, due to gross negligence in carrying out the duties of their office,” the papers demanded.