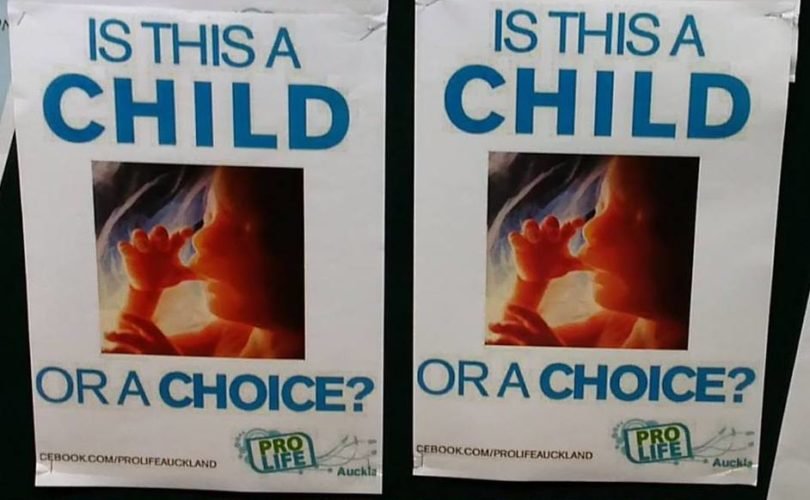 AUCKLAND, New Zealand, August 30, 2017 (LifeSiteNews) — A pro-life student group has been officially disowned by the student union of the largest university in New Zealand for showing healthy baby pictures in the womb.

The Auckland University Students Association referendum to abolish the group Pro-Life Auckland passed 1,600 to 1,100 on Friday. The students association will no longer admit the club, pending a legal review.

The referendum was hurriedly organized after one anonymous complaint against Pro-Life Auckland. It left open the possibility of other clubs with “similar ideology” supporting the sanctity of innocent human life being banned as well.

“Should AUSA disaffiliate the Pro Life Club and ban any clubs with similar ideology from affiliating in the future?” the student referendum read.

The case against Pro Life Auckland enumerated at a student forum centered on the group showing a picture of a healthy baby growing in the womb. Abortion-supporting students characterized the picture as “very very graphic” and offensive.

A member of Auckland Students for Choice said the picture of a healthy baby “makes a lot of people uncomfortable.”

Pro Life Auckland president Jelena Middleton was “dismayed” by the disaffiliation. She said the purpose of her group is to support women through crisis pregnancies and give biological facts to university students. Pro-abortionists call those facts “misinformation.”

Auckland University history professor Paul Moon characterized the referendum as “appalling.” Earlier in the year, Moon wrote a letter to the student body warning against censorship of politically incorrect views.

“Universities play a fundamental role in the thought leadership of a society,” Moon said. “They, of all places, should be institutions where robust debate and the free exchange of ideas take place, not the forceful silencing of dissenting or unpopular views.”

While pro-life students may still meet on campus, the vote means they cannot form an official club, will lose access to material services that the students association provides, cannot publicize activities in certain campus areas, and will have difficulty using campus rooms or receiving university support.

Yuen complained that her group was not allowed to face its accuser or told what the charges were against them. “Furthermore,” she said, “we were provided with less than a week’s notice” to make their defense. “This is a violation of principles of natural justice.”

“AUSA constantly attempts to silence our views,” Yuen said. She pointed out previous attempts in 2012 and 2016 to ban the pro-life group.

According to Auckland City Harbour News, abortion-minded students have been trying to kick out the pro-life group since it started in 2010. In 2012, the students association sought to disaffiliate Pro Life Auckland for “propagating harmful misinformation.”

Whaleoil reported that the students association has an intolerant history of banning clubs which espouse the “wrong ideas.”

“No other group has received the same level of continued scrutiny and protest as ours on campus,” Yuen concluded.

Auckland Students for Choice’s Justine Rose said Pro Life Auckland had been an “embarrassment for AUSA for a long time.” She accused the pro-life group of wanting to hurt women and take away their rights.

Because the decision affects the students association’s financial and administrative processes, specifics of the ouster must be approved by a lawyer before being implemented. As of press time, the association has not received a legal response.

A website, “Democracy Not Hypocrisy,” has been set up to support Pro Life Auckland.

Pro-life student groups in Pennsylvania, New York, Maryland, Texas, Washington, Colorado, and California have been harassed by pro-abortion groups seeking to shut them down. Groups in England and Scotland have faced similar censorship and opposition.