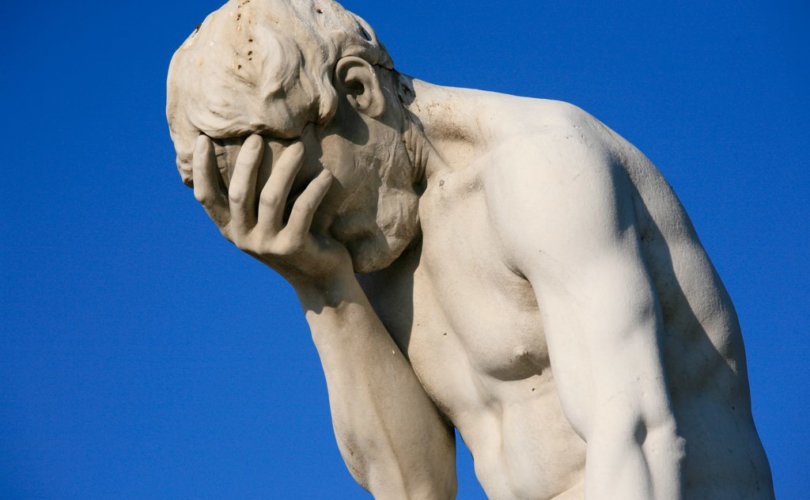 RICHMOND, VA, June 14, 2016 (LifeSiteNews) — The National Review calls it, “one of the most humiliating academic mistakes ever.” Powerline calls it, “the mother of all corrections.” The Media Research Center calls it, “maybe the most embarrassing correction in history.”

Over three years after publishing a study which both presumed and then “found” that political and social conservatism comes from “psychoticism,” “dogmatism,” “intolerance of ambiguity,” the “fear of threat or loss,” and, “serves as a coping mechanism that allows people to manage these threats,” the study's authors are admitting they accidentally reversed the results.

The 2012 study, published in the American Journal of Political Science by three professors at Virginia Commonwealth University, analyzed a survey of 5,748 pairs of twins and their relatives, to see if not only personality, but political views find their genesis in early childhood. The study was called, “Correlation Not Causation: The Relationship between Personality Traits and Political Ideologies.”

But the study's main premise is not what got the mainstream media's attention. The study concluded that those with conservative principles “are more uncooperative, hostile, troublesome, and socially withdrawn,” as well as less conscientious, less agreeable, and more “manipulative.” People who scored low on “Psychoticism,” namely liberals, are “altruistic, well socialized, empathic, and conventional.”

In the study's abstract, the authors admitted, “We expect higher P (Psychoticism) scores to be related to more conservative political attitudes, particularly for militarism and social conservatism.”

The authors introduced their conclusion that conservatives are characterized by Psychoticism, dogmatism, authoritarianism, intolerance and fear by stating this was “in line with our expectations.” They also concluded that those who want to get along (termed “Social Desirability”) are “likely to express socially liberal attitudes.”

However, it has now been revealed that the study actually found the exact opposite of what its authors claimed.

In an admission of error called an “Erratum,” the authors state, “The interpretation of the coding of the political attitude items…was exactly reversed. Thus, where we indicated that higher scores…reflect a more conservative response, they actually reflect a more liberal response.”

The Erratum corrects the original manuscript in several places, rewording it to read the polar opposite of the original: “Opposite our expectations, higher P scores correlate with more liberal military attitudes and more socially liberal beliefs.”

The Erratum explains, “During the extraction for the personality and attitudes project, the specific codebook used for the project was developed in error.” This error was not noticed, because “the descriptive analyses did not appear abnormal to the authors, editors, reviewers or the general academy.”

So in fact, the study found that it is Liberals who are more prone to “Psychoticism” and authoritarianism, while conservatives actually are the ones who wish to get along.

Retraction Watch interviewed the University of Southern Denmark's Steven Ludeke, one of two men who found the mistake. “The erroneous results represented some of the larger correlations between personality and politics ever reported,” he said. “They were reported and interpreted, repeatedly, in the wrong direction; and then cited at rates that are extremely high.”

Ludeke added that although the authors downplay the mistake as not affecting the study's main thesis, “I obviously think the errors themselves matter quite a lot, especially for what it says about the scientific process both pre- and post-review.”

“If this study hadn’t come out conforming to the liberal narrative and sliming conservatives, it wouldn’t have attracted much notice,” Steven Hayward of Powerline assessed. He then added, “By the way, your tax dollars paid for this essential social science research… And people wonder why Republicans in Congress want to cut off federal funding for social science research.”

“This may be the most embarrassing correction in history,” Dan Gainor, Media Research Center's Vice President for Business and Culture, told LifeSiteNews. He added cynically, “I'm sure built-in assumptions about what conservatives are really like had nothing to do with this awful analysis.”

Gainor then rhetorically asked, “Now, will every media outlet that ran this garbage social science run a story about it giving this correction the same level of attention? Of course not.”

The original, incorrect study conclusions were published in 2012 and went online in October 2013; the “Erratum” correction was only published in January of this year.

Retraction Watch has also noted other research papers, some by one of the same authors, which have issued related corrections.

David French of the National Review summarized, “When it comes to science, junk always gets a hearing if it pushes preferred narratives, so I distinctly remember the crowing from certain quarters about the now-proven deficiency of the conservative mind.  Except, well, oops.”

“They exactly reversed the results,” French wrote. “According to the actual results of the study, Liberals are more authoritarian. Conservatives were inclined towards 'social desirability,' French wrote.

And his prediction, after the incorrect 2012 study received so much media publicity, subsequently cited and relied upon at least 45 times in academic journals according to Thomson Reuters Web of Science? “The practical result is that the whole thing will now likely disappear down the memory hole.”