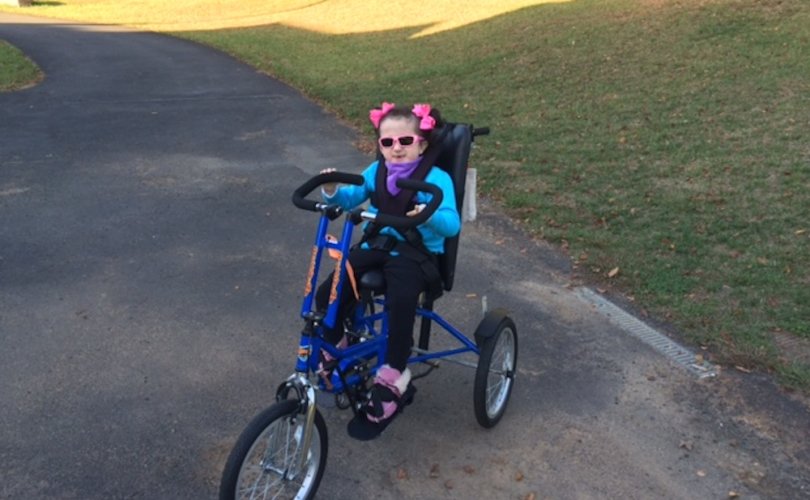 CHICAGO, Illinois, July 27, 2016 (LifeSiteNews) – Research is beginning to show that the “incompatible with life” diagnosis previously given parents of children with two rare conditions is flawed.

Two recent studies indicate that trisomy 13 and trisomy 18, while serious and often fatal, are not as lethal as doctors have been telling parents, and also that children with the highest survival rates are those who have had aggressive treatment.

The two conditions involve extra copies of particular chromosomes and typically disrupt the child’s normal pattern of development, often causing life-threatening problems, including defects in the internal organs or other developmental issues.

Life expectancy has not been long for either, with the majority of trisomy 13 babies not living past their first week of life and most with trisomy 18 dying within the first year.

Another study published in April in the American Journal of Medical Genetics showed a five-year survival rate for trisomy 13 and 18 children between 10 percent and 12 percent, with the research indicating the highest rates were those who had aggressive treatment.

Doctors will often push parents to abort their child upon receiving a trisomy 13 or 18 diagnosis, resist helping the child, make decisions on care without parents’ consent, and have even suggested it is acceptable to not feed the child.

A medical ethicist from Children's Mercy Hospital in Kansas City, Missouri, wrote an editorial that accompanied the Canadian study saying it was “ethically justifiable” to withhold aggressive medical treatment and let some children die while offering aggressive treatment to others, the report said, and that parents’ values should make the determination.

In the past, doctors were taught that the two conditions were fatal, Dr. John Lantos said, but that parents, with the help of social media, more recently were becoming educated and connected through support groups.

“In the social media age, however, everything changed,” Lantos wrote. While online images of surviving children may give false hope, Lantos said they also empower parents “by allowing them to share stories, to compare doctors and to present their physicians with information that challenge medical literature.”

Even before the studies’ release, there were numerous accounts of parents who refused to heed the advice to abort and persevered. They were open to giving their children life, most often with joyous results.

Many children have survived, and others who have not were still considered a gift by their families.

Former Pennsylvania Senator Rick Santorum and his wife, Karen, have become a voice for families who have received a trisomy diagnosis through their experience of having a child born with trisomy 18.

The couple advocates for families who have received a trisomy or other disability diagnosis, and they have shared their experience with their daughter in a book Bella’s Gift.

Bella is now eight years old, and her parents say she is a great kid with a happy life, illustrating how a child with an adverse diagnosis can have life.

“She brings more joy than I can tell you,” Karen Santorum told LifeSiteNews. “She truly has a joy that’s just divine.”

The recent study results on trisomy children were no surprise to the Santorums, who said they frequently hear about situations where families have to fight to get their children proper treatment.

“There’s no question about it,” Rick Santorum told LifeSiteNews. “We’re running into that all the time.”

The research also confirms what they have been saying all along, he added, that children with these diagnosis’ need to be given a chance.

The “incompatible with life” diagnosis puts children at risk, said Karen Santorum, in that it becomes a self-fulfilling prophecy.

The former neonatal ICU nurse said she has been shocked to see children in the NICU starved to death because of a diagnosis and that this was not going on when she was working as a nurse.

“It’s really hard, the things that I’m seeing going on. They call it “comfort care, but these kids are being targeted for lack of care,” Karen Santorum said. “It seems the culture has gotten so harsh. It breaks my heart.”

In Japan, the survival rates for trisomy 18 children are twice what they are in the United States because of the openness to treatment there, the Santorums point out, citing a study titled “Current Situation of Infants with Trisomy 18 Syndrome in Japan — Summary of Research by the Trisomy 18 Support Group.”

“It’s amazing the difference between here and there,” Karen Santorum said.

There is also a difference in U.S. facilities in terms of how receptive doctors may be to treating children with a trisomy diagnosis, the couple said, and recommended the article “Lethal Language, Lethal Decisions” by Koogler, Wilford, and Ross, for parents navigating treatment.

Families with a trisomy diagnosis need information and support, not resistance, Karen Santorum told LifeSiteNews, something that was crucial when their family received the news about Bella.

They also need to be staunch advocates for their children, she pointed out, and explained what her approach to Bella’s care has been. “It’s a blessing and an honor to take care of my little girl, and if you don’t feel the same way, then I don’t want you on our team.”