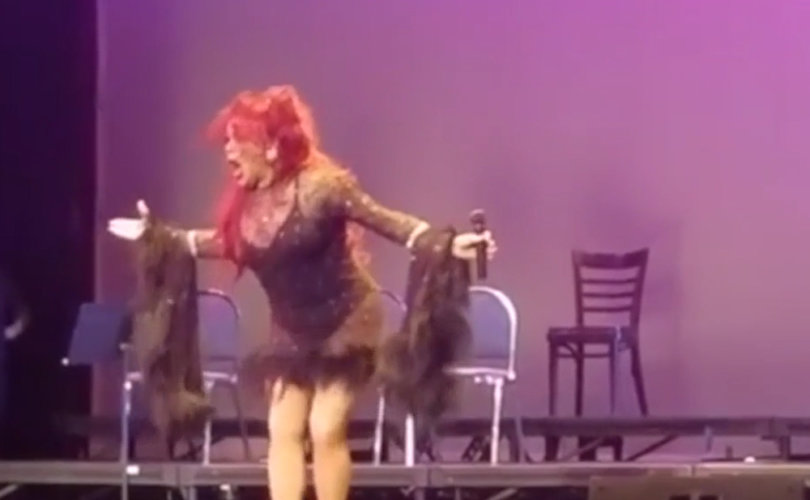 “People were horrified,” said Raquel Morales, who was there with her son, a fifth-grader who attends a public school in the district. “It looked like a nightclub performance.”

Some 200 families from Public School 83, River East Elementary School and PS 96 came to the Learning Expo held in an auditorium at Museo del Barrio on May 25, the New York Daily News reported, expecting to see students from Manhattan’s District 4 display what they learned in school this year.

But toward the end of the event featuring writing and art exhibits, children’s choir performances and instrumental recitals, a man in a bright red wig with heavy makeup dressed in a black sequined frock over a leotard and wearing high heels entered the stage. His vulgar display shocked families, some with children as young as age five.

The man, identified as Public School 96 Parent Association President Frankie Quinones, gyrated his hips and lip-synced to a “slinky” mambo by Latina entertainer Iris Chacón that blared from the PA system.

The families’ initial laughter turned to disbelief and then became dismay as Quinones, whom parents said performs in local drag clubs, then opened his mouth and got extremely suggestive with his tongue.

Quinones then dropped and writhed on the floor, rolled to his back, spread his legs and flashed his bottom, before getting up with his legs wide open and continued to prance around.

“I saw her doing things like sticking her legs out and shaking her bottom and it felt weird,” said Morales’ 10-year-old son, J.D. “I don’t know why they would do that for an elementary school.”

Emcee Alexandra Estrella, District 4 superintendent, had introduced the act, which had been billed on the event flyer as a “Special Surprise Performance!”

“I left the show the minute he started sticking his tongue out. I had my children with me and I wasn’t going to allow them to see that,” stated an incensed PS 96 parent who requested anonymity for fear of reprisal against her children. “It was a very poor presentation of Iris Chacón, anyway. She was not like that.”

“The performance was inappropriate and the school has spoken with the parent,” Education Department spokesman Michael Aciman said.

However, he said school officials have not faced disciplinary action over the drag display.

“I’ve been asking for an apology from the district for the last week,” Morales said, “and they’ve been ignoring it.”