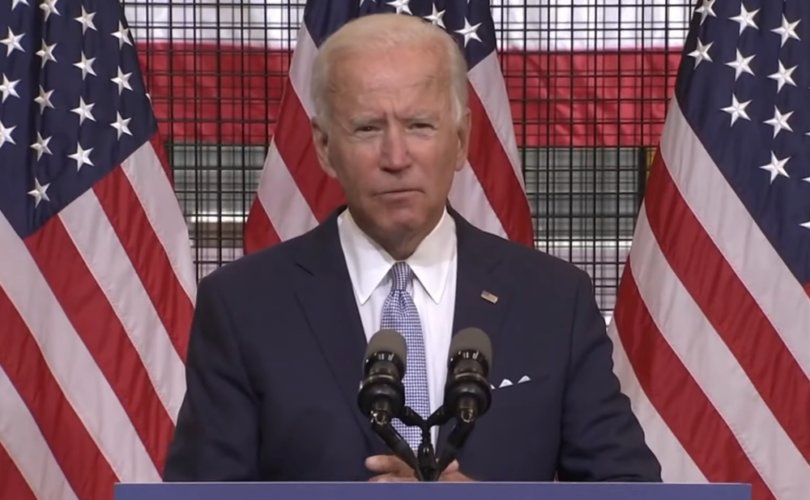 September 11, 2020 (LifeSiteNews) – In a rare televised address characterized by Tucker Carlson as “The most dishonest speech ever given by a major presidential candidate,“ Democratic nominee Joe Biden spoke before a group of approximately half-a-dozen reporters, and no audience, in Pittsburgh on August 31.

Capping off his remarks, which were largely seen by critics as an attempt to blame President Trump for the ongoing violent riots by leftists in democrat-run cities, Mr. Biden evoked St. John Paul II, asserting, “Donald Trump is determined to instill fear in America. That’s what his entire campaign for the president has come down to, fear. But I believe we’ll be guided by the words of Pope John Paul II, words drawn from the scriptures. Be not afraid, be not afraid.”

The former vice president has often emphasized his Catholic identity throughout his political career.  In a formal statement just last month he asserted, “my faith has been the bedrock foundation of my life.”  More recently during the Democratic National Convention, the theme of Mr. Biden’s Catholic faith was routinely highlighted by headline speakers including Michelle Obama, Nancy Pelosi, Jill Biden, and former Republican governor of Ohio, John Kasich.

But while Mr. Biden publicly emphasizes his being a practicing Catholic, he remains a zealous supporter of decriminalized preborn child killing, which the Catechism of the Catholic Church affirms to be always “gravely contrary to the moral law” and an “abominable crime”.  Though the U.S. Conference of Catholic Bishops ranked opposition to legal abortion as the “preeminent priority” for faithful citizenship, Mr. Biden advocates the codifying of Roe v. Wade into federal law and promises to appoint pro-abortion justices to the U.S. Supreme Court.

In addition, he has promised to reimpose Obamacare mandates forcing the Little Sisters of the Poor and other Christian organizations to violate their religious principles in the funding of contraception and abortifacients.

And after many decades of supporting the Hyde Amendment, which prohibits U.S. tax dollars from funding abortion, Mr. Biden buckled to leftist pressure last year and flip-flopped to the opposing position of favoring taxpayer-funded abortions throughout pregnancy.

Maureen Ferguson, Senior Fellow for The Catholic Association, a group dedicated to being a faithful Catholic voice in the public square, noted the inconsistency. “Joe Biden invoking Saint John Paul II to tell us to ‘be not afraid,’ represents a stunning irony, given Biden’s cowardly cave to the extreme pro-abortion wing of his party. Biden flip-flopped in order to get his party’s nomination, endorsing taxpayer funded abortion throughout pregnancy, whereas Saint John Paul II tirelessly proclaimed that ‘The Gospel of life is at the heart of Jesus' message…. there exists a great multitude of weak and defenseless human beings, unborn children in particular, whose fundamental right to life is being trampled upon.’”

Having authored the Church’s major work on the sanctity of human life, Evangelium Vitae, John Paul affirmed “Nothing and no one can in any way permit the killing of an innocent human being, whether a fetus or an embryo, an infant or an adult” (52), and civil leaders “have a duty to make courageous choices in support of life, especially through legislative measures.” The saint maintained that this responsibility can never be renounced, for which they will “answer to God” (90).

Regarding Mr. Biden’s primary topic of violent leftist riots in democrat-run cities, St. John Paul also provides a rational explanation based on this movement’s radically pro-abortion agenda: “Only respect for life can be the foundation and guarantee of the most precious and essential goods of society, such as democracy and peace”(101).

As St. Mother Teresa of Calcutta affirmed at the 1994 National Prayer Breakfast, “the greatest destroyer of peace today is abortion, because it is war against the child … if we accept that a mother can kill her own child, how can we tell other people not to kill one another?”