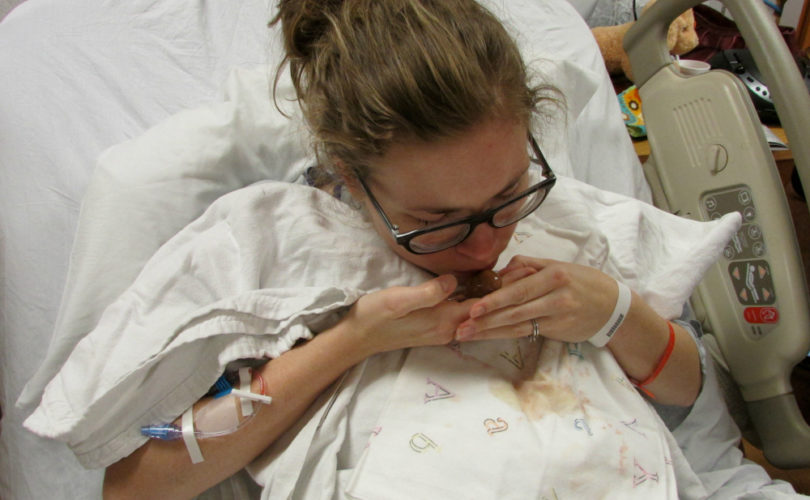 (LiveActionNews.org) – According to Texas law he wasn’t old enough or heavy enough to need a death certificate, but he got a proper burial anyway.

Allison’s son was 13 weeks and 4 days when she lost him. Her husband Daniel, 2 ½ year old son Matthew, along with their family, laid Nathan Isaiah to rest on September 12.

Nathan’s story is one of life and death—and ultimately life. Allison and Daniel, both 28, rejoiced in the news of their pregnancy and looked forward to February 28, 2014, their due date. After suffering a miscarriage about a year after Matthew’s first birthday, they knew they wanted more children, despite the pain of losing Matthew’s younger brother a day after discovering their pregnancy. “I did not have time to even get used to the fact that I was pregnant before blood and pain flooded our happy reality with loss,” Allison said.

Then in June, joy returned as they learned that Nathan was on his way. Excitedly they shared the news with their toddler. “We asked my son, Matthew, which he wanted, a little brother or a little sister, to which he quickly replied, ‘I want a pickle.’  (He had been on a pickle kick.)  So the nickname stuck and Nathan became known as, ‘our little pickle.’”

Allison endured an exceptional case of morning sickness that left her in bed often for two months, but was delighted when the small baby bump formed in her belly; they rejoiced at seeing this life develop.

Seeing a Certified Nurse Midwife at about 12 weeks, Allison and Daniel were thankful for the views of this pro-life provider:

“She was almost just as excited to see his little life on the ultrasound for the first time as we were, and was so passionate about what she was doing.  She affirmed to us privately, during our first ultrasound, how she could not understand how others did not see babies this young in the womb as a life.  Little did we know that her view on this would become so important to us.  She rejoiced with us when we saw him squirming around and kicking his legs and saw his heart beating so quickly—and grieved with us when we lost him.”

Allison recalls how she fell in love so early with the precious life inside her:

“He was so active that he would hardly stay still for her to get a steady reading of his heartbeat.  I cried when we saw him for the first time.  I loved him from the moment I knew he was mine, but then I heard his heartbeat with my sister-in-law’s Doppler, and he burrowed himself a little deeper into my heart, and then I saw his face on the ultrasound and his tiny feet and beating heart and was head over heels.”

The turning point for them came at 15 weeks when, visiting with Allison’s sister-in-law, they repeated an oft-requested favor—to listen to Nathan’s heartbeat on the Doppler, only this time something was different. Nathan, who was already seemingly prepping for a soccer career, had gone strangely silent. For 20 minutes she searched, but could not find the heartbeat.

After trying again the next day, Allison’s worries could not be appeased through the weekend. Feeling no symptoms of miscarriage like before, she and Daniel went to the emergency room anyway, because “I could not wait any longer to find out what was going on with my baby.”

And the news wasn’t good:

“After hours of waiting for an ultrasound, the doctor finally came in and told Daniel and I that our baby was not moving and had no heartbeat.  He said that although I should be 15 weeks along, the baby was measuring 13 weeks and 4 days. No preparation could have been enough.  I felt as though my heart stopped beating with my baby’s.”

She was sent home abruptly:

“The doctor told us that since I had no signs of miscarriage or infection that we were free to go home and follow up with our obstetrics provider on Monday.  Just like that.  No funeral home, no casket; just me, my husband, and our dead child in my womb were to drive home and wait until normal office hours.”

Allison was sustained not only by her family, but by her faith. “I know that the Lord gave me a peace beyond my understanding during this time, and there was such a stillness and a quietness before the Lord.  I did not know what to expect.  I didn’t know what is usually done in this situation.  All I knew is that I didn’t want to rush the hand of God.  I didn’t want to move out of fear or doubt, but out of trust in Him.  I knew He was right there with me.  I knew that He was weeping with me.  I knew that I could trust Him. “

Still the issue of Nathan’s death was a physically present one because after a miscarriage, the baby has to be removed from the mother’s body. Allison didn’t understand everything, but she knew two things:

“From that moment I only had two requests from the Lord.  I didn’t know what to expect and how things would go, but I knew that I absolutely did not want my baby ripped apart in an abortion-like procedure and discarded in some trashcan like he was worthless.  I wanted to have my baby and take him home and give him the dignity of a burial. “

Her doctor confirmed the miscarriage the next week and, unlike in the ER, allowed them to see pictures on the ultrasound of Nathan, revealing the features of the life of her son.  The experience in the exam room further proved the power of unborn life to the family. Allison added, “A young nursing student was in the room with us, and as we saw our little baby and wept over his loss in the exam room.  This awakened, even more, a roar inside my heart for others to see Nathan’s little life.  To know of his significance, to understand that he was our son, a baby, fashioned in my womb by his Creator, fearfully and wonderfully made.”

Cherishing life is part of Allison’s family, and her sister Amy recalls,

“She said she didn’t want someone to just ‘suck her baby’s body out of her,’ that this little one deserved to be honored more than that. She understands sometimes that is necessary but she, we all, prayed it wouldn’t be her necessity.

And then the answer came:

“They told me that a D&C is not as effective after 13 weeks in removing everything that needed to be removed and that I would need to be induced and have the baby in the hospital in Labor and Delivery, and that I would be able to take my baby home and bury him.  A surge of validation, satisfaction, thankfulness, and relief flooded my heart!  Just four days sooner and my baby’s body would have possibly been subjected to unspeakable horrors and possibly discarded like waste.  How could such a thing be? “

The next day, they went to the delivery room where Allison was induced, but refused pain medications. “I wanted to feel the pain and to let the reality of it wash over me,” she said.  “I wanted to be very present and to feel every contraction.  I felt it was my honor to labor for my son.” After over 9 hours of labor, Nathan’s body came out of the womb.   He was named Nathan Isaiah because “Nathan means, ‘gift of God’ because Nathan was a great gift from our Lord, and Isaiah means ‘salvation,’ because the greatest gift God has given us is salvation through His only son, Jesus.”

But the most stunning witness of life was their perfectly formed son. Allison said, “His little body was so perfect with ten tiny fingers and ten tiny toes.  He had a nose, a mouth, two little eyes and ears.”

And the family wanted him buried properly.  As Amy notes, “You see, until 20 weeks gestation a baby doesn’t require a death certificate or to be legally buried in a cemetery.”

Since Nathan, at 13 weeks and 4 days and  6 oz., was neither 20 weeks nor 350 grams, they were free to take him home and bury him on a spot of land where Allison and Amy grew up in East Texas.  Reading the Bible, praying, worshiping they thanked God for the life they had gotten to know in the womb and had gotten to hold after death . “It was simple and beautiful,” Allison said. “It honored the Lord and Nathan.  It shouted significance about a life that many would disregard. “

Amy adds, “My heart is heavy. He was so perfectly formed. No one can deny that 13 week and 4 day old baby wasn’t a baby. He is delicately put together. You can see every detail. I know God will use him to bring glory to His kingdom and for that, I am thankful.”

As the family grieves, the pictures of the life they lost tells the story no one with eyes can clearly deny, even at a time when abortion is legal and common, the blob many see is actually a life.

Nathan Isaiah will always be remembered, and the entire family’s prayer is that his life would remind others of the value of all life.