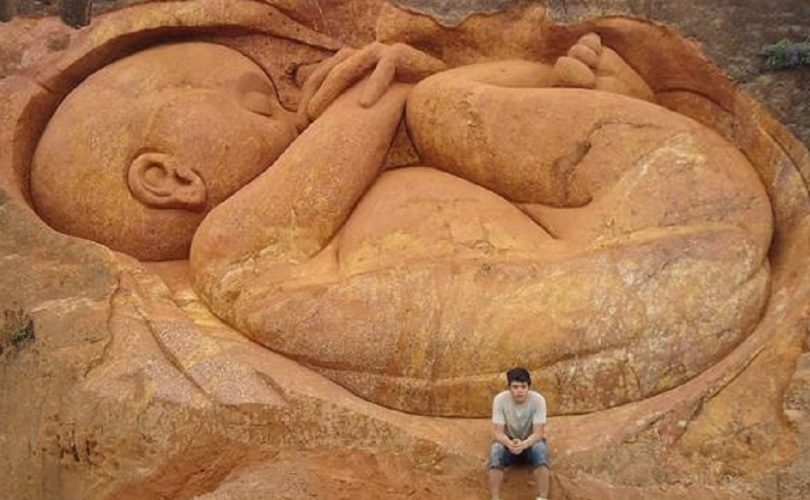 BOGOTÁ, Colombia, September 29, 2015 (LifeSiteNews) – The image of a stunning sculpture carved on a mountain and portraying a baby inside his mother's womb has gone viral in recent months. The sculpture, in the words of artist Dubian Monsalve, is a tribute to “the woman that gives life, because life is valuable from its conception to its end.”

“It is difficult to be an artist and to be faithful,” said Monsalve in an interview with AciPrensa at the beginning of the month. “I haven't had a problem with being an artist and also expressing what I feel and think. Other artists do so, so why should I give up my beliefs?” he explained.

Monsalve completed his work in 2012, but it was only recently that his sculpture became known when someone anonymously took a picture of it and uploaded it online. According to Teleantioquia Noticias, said image has reached over two million likes on Facebook.

The sculpture, titled “Pregnant Mountain,” is located near the town of Santo Domingo, in Colombia, and has of late also become a touristic site.

The artist, who used rudimentary tools to complete his work, explained that doing so was a way to “tell them [farmers from the area] not to abandon their land and to not abandon their beliefs, not abandon their identity as Christians and as farmers who feed this country.”

“Soil has been very important to me as a sculptor,” he continued. “It contains many elements and I used it to talk about life, because Earth itself gives life.”

“Do not be afraid,” he said, referring to other artists who struggle to express their faith. “It is something Jesus taught us, we can't remain silent. I really enjoyed doing this piece because it encompasses a universal message about life, a message to protect life from its beginning until its end and it's not worth it to give up simply because of worldly prejudices and criticism.”

Finally, he said that for him it was all about “strength, being brave and taking a chance on standing by your thoughts, your ideas, and being a Christian artist.”