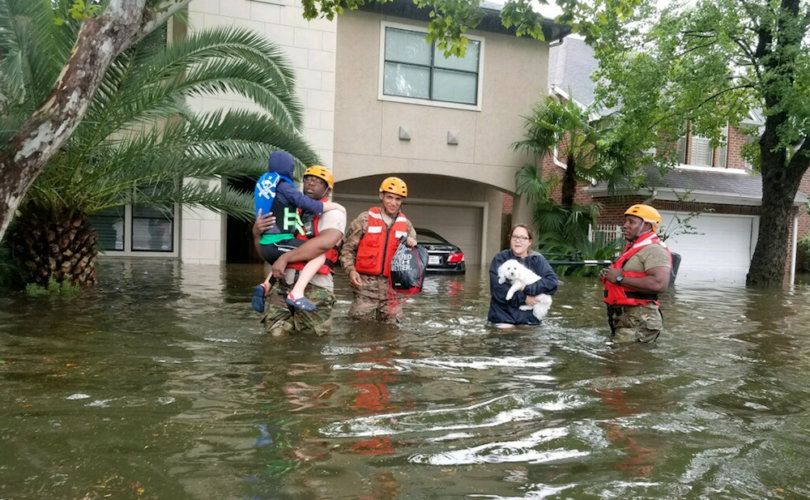 AUSTIN, Texas, September 5, 2017 (LifeSiteNews) – Texas observed a Day of Prayer on September 3 in the wake of Hurricane Harvey.

Gov. Greg Abbott urged Texans of all faiths, religious traditions and backgrounds to pray for the safety of the state’s first responders, public safety officers and military personnel. He also requested prayers for the healing of individuals, rebuilding of communities, and the restoration of the region struck by the disastrous storm.

“Throughout our history, Texans have been strengthened, assured and lifted up through prayer,” he said in the declaration. “And it is right and fitting that the people of Texas should join with their fellow residents and with others from across the country and around the world to seek God’s wisdom for ourselves and our leaders and ask for His merciful intervention and healing in this time of crisis.”

Abbott also said Texans remained strong throughout the ordeal and were grateful for the outpouring of support and resources from around the world that have been sent to assist with the damage as the state begins the process of healing and rebuilding.

Abbott announced the Day of Prayer at an event last Thursday at First Baptist Church in Rockport, Texas, KCBD.com reported, along with Vice President Mike Pence and Reverend Franklin Graham.

“It doesn’t matter what faith or religion or belief that you have. This is a time for Texans and Americans to unite and pray for thanksgiving for those who have risked their lives,” Abbott told the “Fox and Friends” program. “The first responders and volunteers who’ve supported our fellow Texans, but also pray for the victims of this horrific storm. And we want to unite as one state and one nation.”

Vice President Pence and wife Karen prayed with the people in Rockport when they visited. Karen Pence prayed to God to lift up those touched by the storm and give them strength. She gave thanks for first responders, along with everyone who was working to save lives in response to the storm.

Vice President Pence asked Americans to pray the day before at an appearance in Sulphur Springs, West Virginia.

“The President and I would ask all of you gathered here to take a moment in the days ahead to pray,” he said. “Pray for the families who have suffered loss and the loss of a loved one; pray for the first responders, who at this very hour are working to save lives; pray for the federal, state, and local officials who are on the ground; and pray for countless volunteers, who we've all seen come alongside neighbors and even strangers in this hour of need.”

President Trump also signed a declaration making September 3 a National Day of Prayer for the victims of Hurricane Harvey.

Recovery and repair efforts are estimated at $200 million, making the storm one of the most expensive natural disasters in American history.